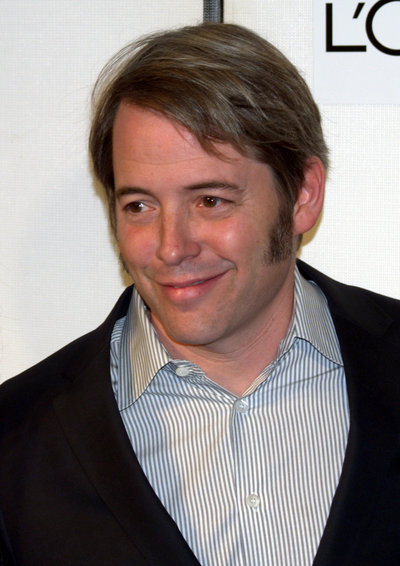 Matthew Broderick (born March 21, 1962) is an American film, stage and voice actor who, among other roles, played the title character in Ferris Bueller's Day Off, voiced Simba in The Lion King, and portrayed Leo Bloom in the Hollywood and Broadway productions of The Producers.

He has won two Tony Awards, one in 1983 for his featured role in the play Brighton Beach Memoirs and one in 1995 for his leading role in the musical How to Succeed in Business Without Really Trying. He was also nominated for the Tony Award, Best Actor in a Musical, for The Producers but lost to his co-star Nathan Lane. As of 2013, Broderick is the youngest winner of the Tony Award for Best Featured Actor in a Play.

Broderick was born in Manhattan, New York City, New York, the son of Patricia (née Biow), a playwright, actress, and painter, and James Joseph Broderick III, an actor and World War II veteran. His mother was Jewish, a descendant of immigrants from Germany and Poland. His father was a Catholic of Irish and English descent. Broderick attended grade school at City and Country School (a progressive K–8 school in Manhattan) and high school at Walden School (a defunct private school in Manhattan with a strong drama program).

Broderick's first major acting role came in an HB Studio workshop production of playwright Horton Foote's On Valentine's Day, playing opposite his father, who was a friend of Foote's. This was followed by a supporting role as Harvey Fierstein's adopted son in the Off-Broadway production of Fierstein's Torch Song Trilogy; then, a good review by The New York Times theater critic Mel Gussow brought him to the attention of Broadway. Broderick commented on the effects of that review in a 2004 60 Minutes II interview:

"Before I knew it, I was like this guy in a hot play. And suddenly, all these doors opened. And it’s only because Mel Gussow happened to come by right before it closed and happened to like it. It’s just amazing. All these things have to line up that are out of your control."

Broderick met actress Sarah Jessica Parker through her brother. The couple married on May 19, 1997 in a civil ceremony in a historic deconsecrated synagogue on the Lower East Side. Although Broderick considers himself culturally Jewish, the ceremony was performed by his sister, Janet Broderick Kraft, an Episcopal priest.

Parker and Broderick have a son, James Wilkie Broderick, born in 2002. In April 2009, it was confirmed that Broderick and Parker were expecting twin girls through surrogacy. Broderick and Parker's surrogate delivered their twin daughters, Marion Loretta Elwell and Tabitha Hodge, in 2009.

Although they live in Manhattan, they spend a considerable amount of time at their holiday home near Kilcar, a village in County Donegal, Ireland, where Broderick spent his summers as a child. They also have a house in The Hamptons.