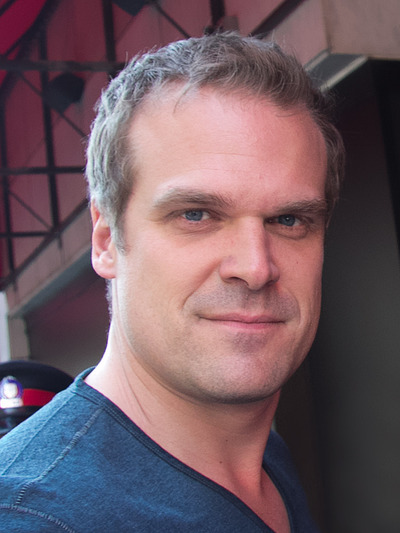 David Harbour (born April 10, 1975) is an American actor who has performed in film, television, and the theatre. He currently stars in the Netflix TV Series Stranger Things as main character Police Chief Jim Hopper.

Harbour went to Byram Hills High School in Armonk, New York along with other actors Sean Maher and Eyal Podell He graduated from Dartmouth College in Hanover, New Hampshire in 1997.

Harbour got his professional start on Broadway in 1999 in the revival of The Rainmaker and made his television debut in 1999 in an episode of Law & Order ("Patsy"), playing a waiter. He appeared again in 2002 in an episode of Law & Order: Special Victims Unit. He played the recurring role of MI6 agent Roger Anderson in the ABC television series Pan Am. In 2005, he was nominated for a Tony Award for his performance in a production of Who's Afraid of Virginia Woolf?

He is known for his role as CIA agent Gregg Beam in Quantum of Solace, as Shep Campbell in Revolutionary Road, and as Russell Crowe's source in State of Play. He also received praise for his role as Paul Devildis on a 2009 episode of Law & Order: Criminal Intent. His other film credits include Brokeback Mountain, The Green Hornet, End of Watch and Between Us. In 2013, he played a small role of a head doctor in the American TV series based on the classic detective Sherlock Holmes, Elementary. He has also played the recurring role of Elliot Hirsch in The Newsroom between 2012 and 2014.

In 2014 he played the recurring character of Dr. Reed Akley in the first season of the historical drama series Manhattan.