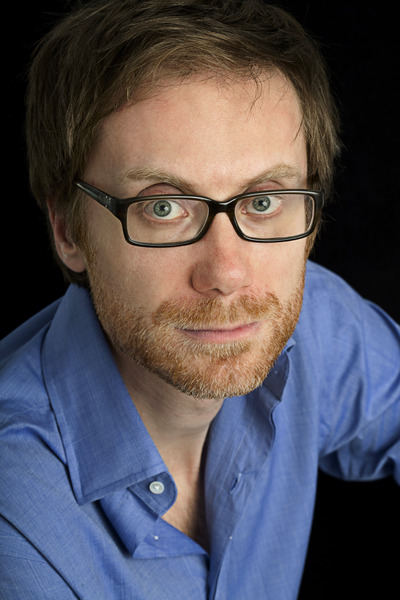 Merchant appeared in the BBC TV series Life's Too Short which he co-wrote and co-directed. He also voiced the character Wheatley in the popular 2011 video game Portal 2, co-developed the Sky1 travel series An Idiot Abroad, and performs as a stand-up comedian. He has won three BAFTA Awards, four British Comedy Awards, two Golden Globes and an Emmy Award.

Merchant was born in Bristol, England, the son of Elaine (née Hibbs), a nursery nurse, and Ronald John Merchant, an insurance representative. He attended Hanham High School. As he has described in Xfm London shows and podcasts, Merchant was a very shy child, tending to focus on school work. His school yearbook predicted that he would enjoy success.

Merchant is a graduate of the University of Warwick, and a former film reviewer on the student radio station, Radio Warwick, where he began his broadcasting career.

Members of Merchant's "posse" included film critic James King, Dan Warren, Neil the Maskell and Geraint the Welshman. Recently, a number of tapes of "The Steve Show", recorded at the time, have been rediscovered and are being distributed on various Merchant fansites. He graduated with a 2:1 in Film and Literature in 1996.

Merchant began his career performing stand-up comedy at Bristol's Comedy Box, where, he recalls, "The first week I did really well ...The second week I died on my arse. I realised that stand-up was not that easy after all." He also appeared as a contestant on a 1997 episode of the TV game show Blockbusters and worked for a short time as a DJ for Radio Caroline.

Merchant met Ricky Gervais for the first time in 1997, when Gervais (then in the position of "Head of Speech" at the London radio station Xfm) hired Merchant as his assistant. (Gervais said later that he had called Merchant for an interview simply because it was the first CV handed to him.) Merchant and Gervais hosted a Saturday afternoon radio show together from January through to August 1998, when both of them left XFM as it was bought by the Capital Radio Group. In the same year, Merchant was a finalist at the Daily Telegraph Open Mic Awards.

Merchant dated digital advertising producer Claire Jones for two years, although their relationship reportedly ended in 2009. Merchant is an atheist. He is the second cousin of Sara Dallinof Bananarama.