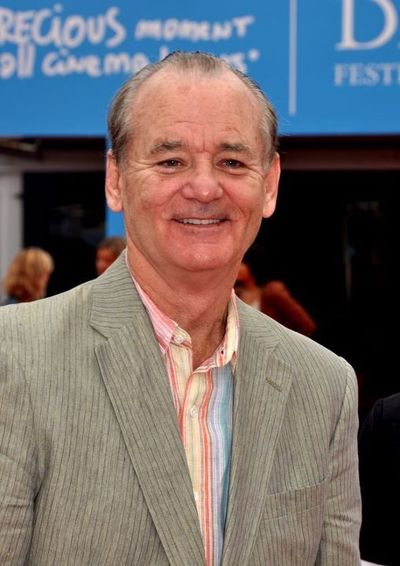 William James "Bill" Murray (born September 21, 1950) is an American actor and comedian. He first gained exposure on Saturday Night Live in which he earned an Emmy Award and later went on to star in a number of critically and commercially successful comedic films, including Caddyshack (1980), Ghostbusters (1984) and Groundhog Day (1993). Murray gained additional critical acclaim later in his career, starring in Lost in Translation (2003), which earned him an Academy Award for Best Actor nomination, the indie comedy-drama Broken Flowers (2005) and a series of films directed by Wes Anderson, including Rushmore (1998), The Royal Tenenbaums (2001), The Life Aquatic with Steve Zissou (2004), Fantastic Mr. Fox (2009) and Moonrise Kingdom (2012).

Murray was born and raised in Wilmette, Illinois, a northern suburb of Chicago, the son of Lucille (née Collins), a mail room clerk, and Edward Joseph Murray II, a lumber salesman. Murray's father died in 1967 from complications of diabetes, when Bill was 17 years old. Murray, along with his eight siblings, were raised in a Catholic Irish American family. Three of his siblings are actors: John Murray, Joel Murray, and Brian Doyle-Murray. A sister, Nancy, is an Adrian Dominican nun in Michigan, who has traveled the United States in a one-woman program, portraying St. Catherine of Siena.

As a youth, Murray read children's biographies of American heroes like Kit Carson, Wild Bill Hickok, and Davy Crockett. He attended St. Joseph grade school and Loyola Academy. During his teen years, he worked as a golf caddy to fund his education at the Jesuit high school. One of his sisters had polio and his mother suffered several miscarriages. During his teen years he was the lead singer of a rock band called the Dutch Masters and took part in high school and community theater.

After graduating, Murray attended Regis University in Denver, Colorado, taking premedical courses. However, he quickly dropped out, returning to Illinois. In 2007, however, Regis awarded him an honorary Doctor of Humanities degree.

With an invitation from his older brother, Brian, Murray got his start at The Second City in Chicago, an improvisational comedy troupe, studying under Del Close. In 1974, he moved to New York City and was recruited by John Belushi as a featured player on The National Lampoon Radio Hour.

Murray landed his first starring role with the film Meatballs in 1979.

During the filming of Stripes, Murray married Margaret Kelly on Super Bowl Sunday in Las Vegas on January 25, 1981. Later, they re-married in Chicago for their families. Margaret gave birth to two sons, Homer (born 1982) and Luke (born 1985). Luke is an assistant basketball coach at Towson University, located outside of Baltimore, Maryland. Following Murray's affair with Jennifer Butler, the couple divorced in 1996. In 1997, he married Butler. Together, they have four sons: Caleb (born January 11, 1993), Jackson (born October 6, 1995), Cooper (born January 27, 1997), and Lincoln (born May 30, 2001). Butler filed for divorce on May 12, 2008, accusing Murray of domestic violence, infidelity, and sex, marijuana and alcohol addiction. Their divorce was finalized on June 13, 2008.