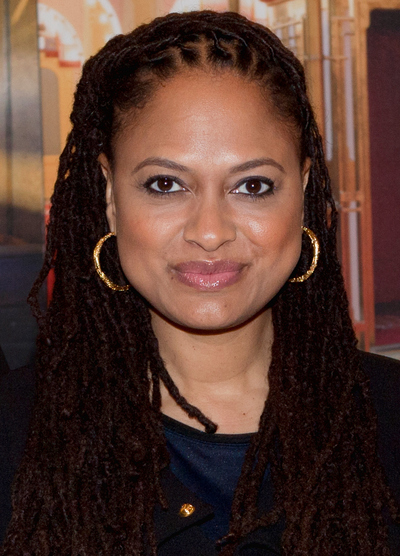 Ava Marie DuVernay (born August 24, 1972) is an American film director, producer, screenwriter, film marketer, and film distributor. At the 2012 Sundance Film Festival, DuVernay won the U.S. Directing Award: Dramatic for her second feature film Middle of Nowhere, becoming the first African-American woman to win the award. For her work in Selma (2014), DuVernay was the first black female director to be nominated for a Golden Globe Award. With Selma, she was also the first black female director to have her film nominated for the Academy Award for Best Picture. In 2017, she was nominated for the Academy Award for Best Documentary Feature for her film 13th (2016).

DuVernay's next film, the fantasy A Wrinkle in Time, has a budget exceeding $100 million, making her the first black woman to direct a live-action film with a budget of that size.

DuVernay was born in Long Beach, California. She was raised by her mother, Darlene, an educator, and her stepfather, Murray Maye. The surname of her biological father, Joseph Marcel DuVernay III, originates with Louisiana Creole ancestry. She grew up in Lynwood, California (near Compton) and graduated in 1990 from Saint Joseph High School in Lakewood. At the University of California, Los Angeles (UCLA), she was a double BA major in English literature and African-American studies.

During her summer vacations, she would travel to the childhood home of her stepfather, which was not far from Selma, Alabama. DuVernay said that these summers influenced the making of Selma, as her father saw the Selma to Montgomery marches as a small child.

Her first interest was in journalism, a choice influenced by an internship with CBS News, where she was assigned to help cover the O.J. Simpson murder trial. She became disillusioned with journalism however, and decided to move into public relations, working as a junior publicist at Fox, Savoy Pictures, and a few other PR agencies before opening her own public relations firm, The DuVernay Agency, also known as DVAPR, in 1999, through which she provided marketing and PR services to the entertainment and lifestyle industry, working on campaigns for movies and television shows such as Lumumba, Spy Kids, Shrek 2, The Terminal, Collateral, and Dreamgirls. Other ventures launched by DuVernay include Urban Beauty Collective, a promotional network with more than 10,000 African-American beauty salons and barbershops in initially 16 (20 since 2008) U.S. cities which were mailed a free monthly Access Hollywood-style promotion program called UBC-TV, in 2003, the African-American blog hub Urban Thought Collective in 2008, Urban Eye, a two-minute long weekday celebrity and entertainment news show distributed to radio stations, as well as HelloBeautiful, a digital platform for millennial women of color.

In 2005, over the Christmas holiday, DuVernay decided to take $6,000 and make her first film, a short called Saturday Night Life. Based on her mother's experiences, the 12-minute film about an uplifting trip by a struggling single mother (Melissa De Sousa) and her three kids to a local Los Angeles discount grocery store toured the festival circuit and was broadcast on February 6, 2007, as part of Showtime's Black Filmmaker Showcase.

DuVernay then moved on to documentaries because they can be done on a smaller budget than fiction films, and she could learn the trade while doing so. In 2007, she directed the short Compton in C Minor for which she "challenged herself to capture Compton in only two hours and present whatever she found." The following year, she made her feature directorial debut with the alternative hip hop documentary This Is the Life, a history of LA's Good Life Cafe's arts movement in which she participated as part of the duo Figures of Speech.

In 2011, DuVernay's first narrative feature film, I Will Follow, a drama starring Salli Richardson-Whitfield, was released theatrically. DuVernay's aunt Denise Sexton was the inspiration for the film. The film cost DuVernay $50,000 and was made in 14 days. Roger Ebert called it "one of the best films I've seen about coming to terms with the death of a loved one." I Will Follow was an official selection of AFI Fest, Pan-African Film Festival, Urbanworld and Chicago International Film Festival.

In the summer of 2011, DuVernay began production on her second narrative feature film, Middle of Nowhere, off a script she had written in 2003 but couldn't get financed then. The film world-premiered on January 20 at the 2012 Sundance Film Festival, where it played in U.S. dramatic competition and garnered the U.S. Directing Award: Dramatic for DuVernay, the first African-American woman to ever win the prize. DuVernay also won the 2012 Independent Spirit John Cassavetes Award for her work on the film.

In 2015, DuVernay was in consideration to direct and possibly co-write Marvel Studios' Black Panther film. She ultimately decided not to join the project, which would ultimately be directed by Ryan Coogler and released in February 2018.

On Thanksgiving 2010 TV One showed the 44-minute documentary special Essence Presents: Faith Through the Storm about two black sisters who reclaimed their lives after personal devastation during Hurricane Katrina. "It was done for a client, for Essence. They wanted to talk about how faith helped them through, that was very important to them. So it is interspersed with gospel music, images of Katrina, their home and family."

ESPN commissioned DuVernay to produce and direct Venus Vs., a documentary on Venus Williams' fight for equal prize money for their film series Nine for IX, which aired on July 2, 2013.

DuVernay directed the John Legend episode of the performance-and-interview series HelloBeautiful Interludes Live which was shown September 14, 2013 on TV One as the series' broadcast premiere.

She also directed the eighth episode of the third season of the political thriller television series Scandal. The episode, titled "Vermont is for Lovers, Too", premiered on November 21, 2013 on ABC.

In 2015, DuVernay executive produced and directed the CBS civil rights crime drama pilot For Justice starring Anika Noni Rose. It was not picked up for distribution.

That same year, DuVernay announced she would be creating and executive producing the drama series Queen Sugar, based on Natalie Baszile's novel. The series premiered September 6, 2016 on Oprah Winfrey Network to critical acclaim and positive reviews. DuVernay directed two episodes – the first two – and wrote four.

In 2013, DuVernay partnered with Miu Miu as part of their Women's Tales film series. Her short film The Door starred actress Gabrielle Union and reunited DuVernay with her Middle of Nowhere star Emayatzy Corinealdi. The film premiered online in February 2013 and was presented at the Venice Days sidebar of the 70th Venice International Film Festival in August.

"Like other African American filmmakers, including pioneers of past generations, DuVernay subscribes to the ethos that art serves a social purpose, debunks demeaning and normative assumptions about black people, and renders black humanity in all manner of genres and complexity." Like many black art movements before her, she continues to advocate for black empowerment and representation in the media.

Two core themes embody her line of work. First, is sustained interrogation that engages with black women's agency and subjectivity. Second, she refers to family as "site and source of resilience, memory, cultural transmission, generational continuity and dissonance, and as purveyor of all things affirming of black identity".

Michael T. Martin has said "DuVernay is among the vanguard of a new generation of African American filmmakers who are the busily undeterred catalyst for what may very well be a black film renaissance in the making." He further speaks of DuVernay’s mission and "call to action" which constitutes a strategy "to further and foster the black cinematic image in an organized and consistent way, and to not have to defer and ask permission to traffic our films: to be self-determining."