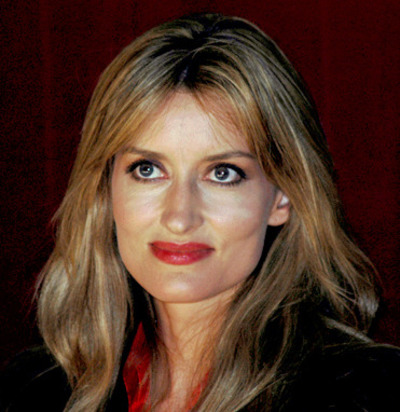 Natascha McElhone (born Natasha Abigail Taylor; 23 March 1970) is an English actress of stage, screen and television, best known for her roles in American films such as Ronin, The Truman Show and Solaris, and most recently for her role as Karen van der Beek on the Showtime series Californication.

McElhone was born in Surrey, to Irish parents, who were both journalists. She took her mother Noreen's maiden name as her stage name. McElhone has a scriptwriter brother Damon who lives in Los Angeles, and two half-brothers, Alexander and Nicholas, who live in Stockholm. Her parents separated when she was two and her Irish mother moved the family to Brighton and later married journalist and columnist Roy Greenslade.

McElhone, who took lessons in Irish dancing from ages 6–12, was educated at St. Mary's Hall School for Girls, an independent boarding school in Brighton, Sussex. She graduated from the London Academy of Music and Dramatic Art in 1993.

McElhone began her career in the theatre, including starring in Richard III in Regent's Park, The Count of Monte Cristo and The Cherry Orchard at the Haymarket Theatre, Leicester; and in Midsummer Night's Dream at the Open Air Theatre. McElhone made her television debut in the BBC's Bergerac in 1991, and was seen in an episode of Absolutely Fabulous in 1992.

McElhone made her film debut in 1996's Surviving Picasso with Anthony Hopkins. In the same year she was seen in the Dennis Potter TV mini-series Karaoke. Although she has made relatively few films, her most successful to date has been 1998's The Truman Show with Jim Carrey. She had leading roles opposite Brad Pitt in The Devil's Own, Robert De Niro in Ronin and George Clooney in Solaris.

McElhone married plastic surgeon Dr. Martin Hirigoyen Kelly on 19 May 1998. The couple lived in Fulham, West London, with their sons Theodore (born 2000) and Otis (born May 2003); their third son, Rex, was born in October 2008, 5 months after Kelly's death.

On 20 May 2008, 43-year-old Kelly was found slumped in the doorway of his family's home by a fellow doctor, who had him rushed to Chelsea and Westminster Hospital (where he worked) but could not be revived. He died one day after his 10th wedding anniversary. A post-mortem exam revealed the cause of death to have been dilated cardiomyopathy.

After her husband's sudden death, McElhone continued to write letters to him, sometimes documenting the daily trivia of life but also dealing with how she and their young children were coping with their loss. These letters and diary entries formed the basis of her book After You: Letters of Love, and Loss, to a Husband and Father. The book was published in July 2010. (The book is simply titled After You in the Kindle edition-UK version only.)