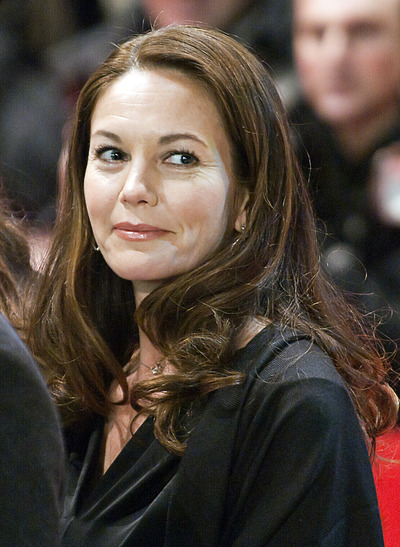 Diane Lane (born January 22, 1965) is an American actress. Born and raised in New York City, Lane made her screen debut in George Roy Hill's 1979 film A Little Romance, starring opposite Sir Laurence Olivier. Soon after, she was featured on the cover of Time magazine and dubbed "the new Grace Kelly".

She has since appeared in several notable films, including the 2002 film Unfaithful, which earned her nominations for an Academy Award, a Golden Globe and a Screen Actors Guild Award. Lane has also starred in The Outsiders, The Perfect Storm, Under the Tuscan Sun, Cinema Verite, and in 2013, Man of Steel.

Lane was born in New York City to Colleen Leigh Farrington, a nightclub singer and Playboy centerfold (Miss October 1957), who was also known as "Colleen Price" and Burton Eugene Lane, a Manhattan drama coach who ran an acting workshop with John Cassavetes, worked as a cab driver, and later taught humanities at City College. When Lane was thirteen days old, her parents separated. Lane's mother went to Mexico and obtained a divorce while retaining custody of Lane until she was six years old. Lane's father got custody of her after Lane's mother moved to Georgia. Lane and her father lived in a number of residential hotels in New York City and she would ride with him in his taxi.

When Lane was fifteen years old, she declared her independence from her father and flew to Los Angeles for a week with actor and friend Christopher Atkins. Lane later remarked, "It was reckless behavior that comes from having too much independence too young." She returned to New York and moved in with a friend's family, paying them rent. In 1981, she enrolled in high school after taking correspondence courses. However, Lane's mother kidnapped her and took her back to Georgia. Lane and her father challenged her mother in court and six weeks later she was back in New York. Lane did not speak to her mother for the subsequent three years, but they have since reconciled.

Lane's grandmother, Eleanor Scott was a Pentecostal preacher of the Apostolic denomination, and Lane was influenced theatrically by the demonstrative quality of her grandmother's sermons. Lane began acting professionally at the age of six at the La MaMa Experimental Theater Club in New York, where she appeared in a production of Medea. When Lane was twelve years old, she had a role in Joseph Papp's production of The Cherry Orchard with Meryl Streep. Also at this time, Lane was enrolled in an accelerated program at Hunter College High School and was put on notice when her grades suffered from her busy schedule. When Lane was thirteen years old, she turned down a role in Runaways on Broadway to make her feature film debut opposite Laurence Olivier in A Little Romance. Lane won high praise from Olivier who declared her 'The New Grace Kelly'. At the same time Lane was featured on the cover of Time, which declared her one of Hollywood's "Whiz Kids."

In the early 1980s, Lane made a successful transition from child actor to adult roles. She was cast as the teenaged female outlaw Little Britches in the 1981 Lamont Johnson film, Cattle Annie and Little Britches, with Amanda Plummer in her own debut role as Cattle Annie. Lane's breakout performances came with back-to-back adaptations of young adult novels by S. E. Hinton, adapted and directed by Francis Ford Coppola: The Outsiders and Rumble Fish, both in 1983. Both films also featured memorable performances from a number of young male actors who would go on to become leading men in the next decade (as well as members of the so-called "Brat Pack"), including Tom Cruise, Rob Lowe, C. Thomas Howell, Emilio Estevez, Patrick Swayze, Mickey Rourke, Nicolas Cage, and Matt Dillon. Lane's distinction among these heavily male casts advanced her career while affiliating her with this young generation of male actors. Andy Warhol proclaimed her, "the undisputed female lead of Hollywood's new rat pack."

However, the two films that could have catapulted her to star status, Streets of Fire (she turned down Splash and Risky Business for this film) and The Cotton Club, were both commercial and critical failures, and her career languished as a result. After The Cotton Club, Lane dropped out of the movie business and lived with her mother in Georgia. According to the actress, "I hadn't been close to my mom for a long time, so we had a lot of homework to do. We had to repair our relationship because I wanted my mother back".

Lane returned to acting to appear in The Big Town and Lady Beware, but it was not until 1989's popular and critically acclaimed TV miniseries Lonesome Dove that Lane made another big impression on a sizable audience, and was nominated for an Emmy Award for her role. She came very close to being cast as Vivian Ward in 1990's blockbuster hit Pretty Woman (which had a much darker script at the time), but due to scheduling was unable to take the role. Apparently, they had even got as far as costume fittings for Lane, before the role eventually went to Julia Roberts. She was given positive reviews for her performance in the independent film My New Gun, which was well received at the Cannes Film Festival. She went on to appear as actress Paulette Goddard in Sir Richard Attenborough's big-budget biopic of Charles Chaplin, 1992's Chaplin. Lane won further praise for her role in 1999's A Walk on the Moon, opposite Viggo Mortensen. One reviewer wrote, "Lane, after years in post-teenaged-career limbo, is meltingly effective." The film's director, Tony Goldwyn, described Lane as having "...this potentially volcanic sexuality that is in no way self-conscious or opportunistic." Lane earned an Independent Spirit Award nomination for Best Female Lead. At this time, she was interested in making a film about actress Jean Seberg in which she would play Seberg.

Lane met actor Christopher Lambert in Paris while promoting The Cotton Club in 1984. They had a brief affair and split up. They met again two years later in Rome to make a film together, entitled After the Rain, and in two weeks they were a couple again. Lane and Lambert married in October 1988 in Santa Fe, New Mexico. They have a daughter, Eleanor Jasmine, and following a prolonged separation were divorced in 1994.

Lane became engaged to actor Josh Brolin in July 2003 and they were married on August 15, 2004. On December 20 of that year, she called police after an altercation with him, and he was arrested on a misdemeanor charge of domestic battery. Lane declined to press charges, however, and the couple's spokesperson described the incident as a "misunderstanding." Lane and Brolin filed for divorce in February 2013. Their divorce was finalized on December 2, 2013.