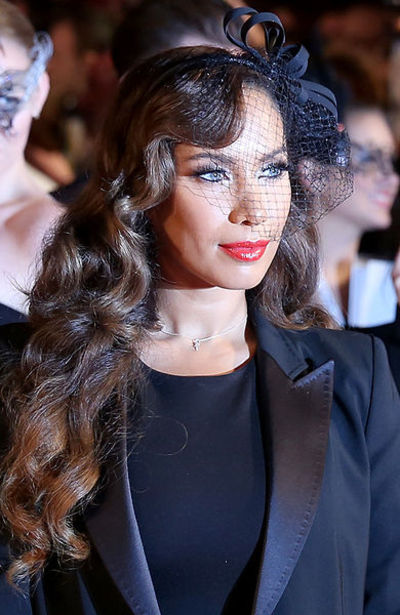 Leona Louise Lewis (born 3 April 1985) is a British singer-songwriter. She was born and raised in the London Borough of Islington, where she attended the BRIT School for Performing Arts and Technology. Lewis achieved national recognition when she won the third series of The X Factor in 2006, winning a £1 million recording contract with Simon Cowell's record label, Syco Music. Her winners single, a cover of Kelly Clarkson's "A Moment Like This", peaked at number one for four weeks on the UK Singles Chart and broke a world record for being digitally downloaded more than 50,000 times in 30 minutes. In February 2007, Lewis signed a five-album contract in the United States with Clive Davis's record label, J Records (now RCA Records).

Lewis's success continued with the release of her debut album, Spirit, in 2007; it went 10x platinum in the United Kingdom, while the lead single, "Bleeding Love", spent seven weeks at number one. She achieved international recognition with the album in 2008, when she became the first British female to top the US Billboard 200 album chart in more than 20 years. Spirit has sold more than eight million copies worldwide, and "Bleeding Love" peaked at number one in over 30 countries, becoming the best-selling single of 2008 worldwide. As a result, she was proclaimed 'Top New Artist' by Billboard in 2008. Under the guidance of Cowell and Davis, Lewis released her second UK number one album Echo and recorded the theme song for the film Avatar in 2009, while embarking on her first UK arena tour, The Labyrinth, in 2010.

In 2011, Lewis released the non-album single "Collide", a collaboration with Swedish DJ Avicii, and her first extended play, Hurt: The EP. Her third album, Glassheart, was released in 2012. It marked a new creative direction for Lewis, drawing inspiration from dubstep and electronic music. However, it failed to match the commercial performance of her two previous albums, peaking at number three on the UK Albums Chart and becoming her first to not be certified platinum. Lewis began to record material for her first Christmas album during her Glassheart Tour, which took place in mid 2013. Christmas, with Love was released later that year. Its lead single, "One More Sleep", peaked at number three on the UK Singles Chart. With this chart entry, Lewis broke the record for British female solo artist with the most UK top five singles, with a total of eight, surpassing Olivia Newton-John's record of seven.

With a career spanning eight years, Lewis is the best selling act to have emerged from The X Factor, with over 20 million albums sold worldwide, as well as being the British female solo artist with most weeks at number one in the United Kingdom. Lewis has won two MOBO Awards, an MTV Europe Music Award, an MTV Video Music Award and two World Music Awards. She is also a six time Brit Awards and three time Grammy Award nominee. Lewis is famed for her expansive four octave mezzo-soprano vocal range, power, technical control and use of the falsetto register. Aside from her musical career, Lewis is a philanthropist and animal welfare campaigner for World Animal Protection. She is also a vegetarian.

Leona Louise Lewis was born in the London Borough of Islington on 3 April 1985, to her father Aural Josiah "Joe" Lewis, a youth offending officer and DJ of Afro-Guyanese descent, and her mother Maria Lewis, a social worker and former ballet teacher of Welsh, Irish, and Italian descent. Lewis has two brothers, an older half-brother named Bradley and a younger brother named Kyle. As her parents began to realise Lewis's passion for singing, they enrolled her at the Sylvia Young Theatre School, and later to the Italia Conti Academy, the Ravenscourt Theatre School and the The BRIT School for Performing Arts and Technology until they could no longer afford to do so, making cutbacks when necessary in order to help their daughter achieve her dream of being a singer. Lewis wrote her first song at the age of 12; she initially trained in opera, before moving into jazz and blues, and eventually into popular and contemporary music.

At the age of 17, Lewis decided to leave BRIT School in order to "get out there" and pursue a career in music. By this point, she had already began to write and record her own material, and worked as a receptionist at a solicitors office and a Pizza Hut waitress in order to fund the studio sessions. At age 18, Lewis secured a lead role in The Lion Kingtheatre show in Paris; however, she decided to turn the part down after she hurt her back while ice-skating.

She recorded a demo album called Twilight in collaboration with Spiral Music, a production company based in Fulham, however it failed to secure Lewis an album deal with any record companies. Although the album was never released commercially, Lewis performed a couple of the tracks live on the Radio 1 music station in 2004. Another demo album was recorded under license from UEG Entertainment called Best Kept Secret, who have reportedly claimed to have spent £70,000 trying to launch Lewis's career with no success. A track from the album called "Private Party" became a hit on the underground urban music scene in London in 2005. Speaking about her struggle to secure a record contract, Lewis said "I tried to secure a record deal by doing things my own way. I worked very hard but I never managed to land a contract. That's why I decided to audition for The X Factor. It's programmes like these which provide the best place to showcase fresh new talent."

Lewis auditioned for the third series of The X Factor in 2006, singing "Over the Rainbow" for judges Simon Cowell, Louis Walsh, Sharon Osbourne and guest judge Paula Abdul. She was eventually placed in the girls category, with Cowell as her mentor. Throughout the course of the show, Lewis was compared to Mariah Carey, Whitney Houston and Celine Dion (as well as other artists), performing songs by all three of them. Lewis was eventually declared the winner of the competition in December 2006, beating runner up Ray Quinn with 60% of the public vote; more than eight million votes were cast. Her winners single, a cover of Kelly Clarkson's song "A Moment Like This", was released on 17 December 2006. In the United Kingdom, it broke a world record after being digitally downloaded more than 50,000 times in less than 30 minutes. The song became the 2006 UK Christmas number-one single, selling 571,000 copies in its first week and selling more than the Top-40 combined. It spent four consecutive weeks atop the UK Singles Chart, and was number one in Ireland for six weeks. "A Moment Like This" became the second best selling single in the United Kingdom in 2006, and has been certified platinum by the British Phonographic Industry (BPI), denoting shipments of over 600,000 copies. As of December 2012, Lewis's version has sold 895,000 copies in the United Kingdom. For winning, Lewis signed a £1 million recording contract with Cowell's record label, Syco Music.

Lewis lives in Hackney. She lived with her boyfriend, who became an A&R scout for Sony records, until their split in June 2010. They had known each other since she was approximately ten years old. Since 2010 she has dated dancer and choreographer Dennis Jaunch. Lewis has been a vegetarian since she was 12, she won PETA's Sexiest Vegetarian along with Red Hot Chili Peppers frontman Anthony Kiedis in 2008, and Europe's Sexiest Vegetarian in 2009 with actor Scott Maslen. She also was named PETA's Person of the Year for 2008.