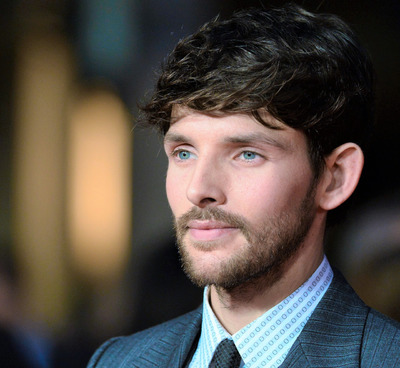 Colin Morgan (born 1 January 1986) is a Northern Irish film, television, theatre and radio actor best known for playing the title character in the BBC fantasy series Merlin and main roles in Humans and The Fall; his stage role as Ariel in The Tempest; and film roles in Testament of Youth, Legend and The Huntsman: Winter's War.

Morgan made his West End theatre debut in 2007 to critical acclaim as the title character in DBC Pierre's Vernon God Little. He went on to appear in the London theatre productions Pedro Almodóvar's Todo sobre mi madre (All About My Mother) in 2007, Thomas Babe's A Prayer for My Daughter in 2008, Pedro Miguel Rozo's Our Private Life in 2011, Step in Time at The Old Vic 24 Hour Musicals Celebrity Gala in 2012, Shakespeare's The Tempest in 2013, and Jez Butterworth's Mojo during 2013 and 2014.

In addition to his lead role in the fantasy-adventure television programme Merlin (2008–12), Morgan has appeared in The Catherine Tate Show (2007), Doctor Who (2008), Quirke (2014), The Fall (2014–present), and Humans (2015–present), the two latter shows he will reappear in, in 2016. He will also star in BBC One's six-part Victorian era supernatural drama series The Living and the Dead (2016) as the gentleman farmer Nathan Appleby, the central character of the story. Film roles include Parked (2010), Island (2011), Testament of Youth (2015), Legend (2015), The Laughing King (2016), and The Huntsman: Winter's War (2016). He will be starring as the lead character Paul Ashton in Waiting for You (2016), a British coming-of-age feature set in France and England. He will be portraying the central role of the Irish revolutionary mastermind Seán Mac Diarmada in the Easter Rising centenary commemoration film The Rising (2017).

For his performance in Merlin, Morgan received the 2008 Outstanding Newcomer award from Variety Club Showbiz Awards, and was nominated for Outstanding Actor (Drama) in the Monte Carlo TV Festival Awards in 2009, 2010, and 2011, the Best Actor award in Virgin Media TV Awards in 2012, and the prestigious Best Actor in Drama Performance: Male award in National Television Awards in 2013. In the same year, Morgan won Broadway World West End Awards' Best Featured Actor in a New Production of a Play for his performance as Ariel in The Tempest.

In July 2008, Screen International named Morgan as a "Star of Tomorrow," alongside actors like Carey Mulligan where he was "hailed as the most exciting drama-school graduate since Ben Whishaw." In October 2013, he was ranked in the No. 1 spot in BuzzFeed's "The 17 Rising British Actors Most Likely To Do A Cumberbatch." In April 2014, Irish entertainment website The Daily Edge included Morgan in their list of "8 young Irish actors who could be on the brink of global stardom," and in December 2014, The Independent listed him as one of their "Bright Young Things: 10 Faces to Watch in 2015." In August 2015, Indiewire's entertainment blog The Playlist included him in their list "On The Rise 2015: 20 Actors To Watch."

Morgan was born in Armagh, Northern Ireland, the son of Bernard, a painter and decorator, and Bernadette, a nurse. He is the younger of two brothers; he and his brother Neil were raised Roman Catholic.

His childhood was spent in the long shadow of "The Troubles." Childhood memories include being woken up in the middle of the night in order to evacuate the family home because there was a pipe bomb in the house next door, and having to go into school with a note for his teacher to explain why he hadn’t done his homework. The social repercussions of Northern Ireland’s problems impacted Morgan's ability to pursue his love of theatre, as there were virtually no opportunities for a young person to nurture, let alone study, acting in the Province at that time. Fortunately, Morgan has said he "found a way to get involved in drama in any way I could. I joined the local amateur dramatic society, and I still have such fond memories of those times."

His inclination to perform was evident from an early age — he was only five years old when he made his stage debut, appearing in the chorus in a production of Cinderella, and then Peter Pan, among other amateur stage productions during his childhood.[8] While he attended Saints and Scholars Integrated Primary School, Morgan's teacher Harry McGee became a tremendous inspiration to him; according to Morgan, "[McGee] would stay behind after class each day and he'd pull out a poem and he'd say, 'Let’s work on this,' and we'd just do it. He really believed in me and really fueled my passion. And that’s all it takes sometimes, I think, just one person to believe in you."

McGee gave Morgan the encouragement he needed to attempt a career as a professional actor. In 1997, at the age of eleven, Morgan began studies at Integrated College Dungannon, winning the 'Denis Rooney Associates Cup' for best overall student in Year 10. The school described him as a keen musician and budding actor; his drama teacher James McCoy said that Morgan "participated wholeheartedly in every Drama class, concert and production that the college was showcasing."[10] Morgan starred in several college productions including the renowned Surgical Sensations at St. Senapods and Bad Day at Black Frog Creek.

In September 2002, a 16-year-old Morgan auditioned alongside 100 other young performers at Belfast's Waterfront Hall for the You're A Star RTÉ One programme which was in search of star quality performers. The winner was to receive a record contract and also represent Ireland at the Eurovision Song Contest. He didn't make it, but was quoted as saying, "It's not the end of the world. I'm going to try and make it on stage one day." Determined, he went on to study in Belfast despite family and friends' worries because his chosen school was in a predominantly Protestant area that had recently had an incident of masked paramilitary men wanting to execute Roman Catholic students. For two years, Morgan commuted several hours every day between Armagh and Belfast because the latter was the closest city that had a college that offered drama as a subject. He was awarded a National Diploma in Performing Arts from the Belfast Institute of Further and Higher Education in 2004. After winning a spot at the prestigious Royal Conservatoire of Scotland in Glasgow, Morgan left Northern Ireland to hone his craft for an additional three years, graduating in 2007. In the final year of his undergraduate course, he was discovered by theatre director Rufus Norris and made the decision to leave three-quarters of the way through to make his professional London West End theatre debut as the title character in Vernon God Little. Morgan's performance was critically acclaimed and used as assessment for his final grade.

In November 2010, the Belfast Metropolitan College (formerly the Belfast Institute of Further and Higher Education) honoured Morgan with an Award of Distinction for his contribution to the Arts.

Morgan made his professional stage debut in the West End as the titular character Vernon God Little in an adaptation of the dark comedy mounted at the Young Vic in 2007. For his turn as the troubled Texan teenager on the run from the police, The Telegraph proclaimed that Morgan "captures all the vulnerability, confusion and gallows humour of the adolescent hero who finds himself in no end of trouble." The Stage said his performance was "[fu]ll of restless energy and youthful charisma from start to finish," adding that "Morgan is an absolute delight and carries the weight of the production on his shoulders with ease and a certain swagger." That same year, Morgan went on to play the role of Esteban, an aspiring teenage writer, in the Old Vic stage adaptation of Pedro Almodóvar's Todo sobre mi madre (All About My Mother) opposite Dame Diana Rigg, Lesley Manville, and Mark Gatiss. For both of these roles, Morgan was nominated for the 2007 London Newcomer of the Year in the Whatsonstage.com Theatregoers' Choice Awards.

In television, Morgan first appeared in 2007 as embarrassed gay son John Leary in sketches on The Catherine Tate Show's "Christmas Special." In 2008, he portrayed the conflicted emo space boy Jethro Cane opposite David Tennant in the fan-favourite Doctor Who episode "Midnight."

Morgan is best known for playing the title role in BBC TV series Merlin from 2008 to 2012, alongside a main cast including Bradley James, Katie McGrath, Angel Coulby, Richard Wilson, John Hurt, and Anthony Head. Merlin chronicles the adventures of a young warlock who serves as Arthur's servant and Gaius' ward; Merlin must secretly develop his magical gifts under the gaze of kings Uther and Arthur, both of whom despise the art.

Morgan portrayed the homeless drug-addict Cathal O'Regan opposite Colm Meaney in the award-winning 2010 independent Irish film Parked, for which he employed method acting, spending several weeks in Dublin in various locations such as the Aids Alliance to research drug addiction and homelessness. Morgan also took up smoking for a month prior to filming, and used a local Dublin accent. The film received several awards in various film festivals around the world, and Morgan's performance was praised by multiple critics and director Darragh Byrne.

In 2011, Morgan appeared in the film Island, an independent adaptation of Jane Rogers' novel of the same name.

Morgan next portrayed WWI British soldier Victor Richardson, a school friend of Vera Brittain's brother Edward, in a BBC Films and Heyday Films feature adaptation of her first World War I memoir Testament of Youth. The film was made in commemoration of the 100th anniversary of World War I and included actors Alicia Vikander, Kit Harington, Emily Watson, Hayley Atwell, Dominic West and Miranda Richardson. To prepare for the role of the soldier rendered blind during his service, Morgan read Vera Brittain's works, as well as personal letters exchanged between Vera, Victor, and their friends. He also contacted a Blind Veterans Charity in Brighton, which allowed him to interview someone who had lost their sight in the Second World War and someone who lost their sight more recently. He drew upon these two perspectives and simulated blindness himself using a blindfold and becoming a resident for several hours. The film was very favourably received, as was Morgan's portrayal of Victor. British Film Institute's brochure said, "Shining brightly and lingering long in the mind afterwards, are the performances of three rising British stars – Colin Morgan, Taron Egerton and Kit Harington – who do collective justice to the memory of the ordinary heroes they portray,” while Screen Relish said "Colin Morgan as Victor Richardson is the best of the boys, perfectly cast for his take-him-home-to-mother-him childlike face, which Morgan fantastically merges with the sweet but pitiable Victor, who hardens as the war worsens."

Morgan is a vegetarian, citing allergies and lactose intolerance, and has advocated ethical consumerism. He practises yoga, and has expressed his enthusiasm for it in interviews. "Yoga is phenomenal. I like the breathing, and the focus that it brings. But I can be quite energetic if I’m doing a play. You will often find me running along the corridors to let off steam." He has noted admiration for Terry Pratchett, David Attenborough, Tim Burton and Sam Mendes, as well as the band Death Cab for Cutie.

Morgan is an accomplished Bodhrán (Irish drum) player and has a BAF 1 Star Stage Combat Certificate. Apart from his native Northern Irish one, he has performed with RP English, Scottish, Dublin Irish, London Cockney, and American English accents.

Morgan does not participate in social media. He ventures online only to check emails or to shop. He has said, "There's no social media or googling yourself. You only have to do it once to learn never to do it again."