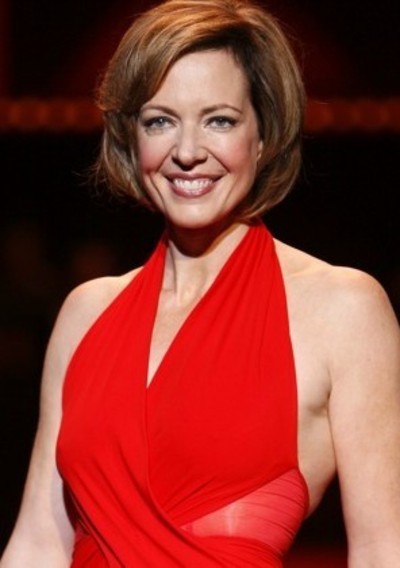 Allison Brooks Janney (born November 19, 1959) is an American actress. She is a six-time Primetime Emmy Award winner for her television work and has won a Drama Desk Award and received two Tony Award nominations for her work in the theatre.

Janney studied at the Neighborhood Playhouse Theatre, from where she won a scholarship to study at RADA in the summer of 1984. She made her Broadway debut in 1996, in a revival of the Noel Coward play Present Laughter. For her role in the 1997 Broadway revival of A View From the Bridge, she won a Drama Desk Award and received her first Tony Award nomination. She played White House Press Secretary (later Chief of Staff) C. J. Cregg on the television series The West Wing (1999–2006), a role for which she received six Emmy Award nominations, winning four. The role also won her a Satellite Award and four Screen Actors Guild Awards. In 2009, she was nominated for a second Tony Award, for her role in the Broadway musical 9 to 5.

Janney was born in Boston, Massachusetts and grew up in Dayton, Ohio. She is the daughter of Macy Brooks (née Putnam), a former actress and homemaker, and Jervis Spencer Janney, Jr., a real estate developer and jazz musician. She has an older brother, Jay, and a younger brother, Hal.

Janney attended The Miami Valley School in Dayton, where she was named a distinguished alumna in 2004, and the Hotchkiss School in Connecticut. She then attended Kenyon College in Gambier, Ohio. At Kenyon, Janney studied under another Kenyon alum, actor Paul Newman. Newman directed Janney in a play as the inaugural event of the school's newly dedicated Bolton Theater. Newman and his wife Joanne Woodward encouraged Janney to continue acting. She then went on to study drama at the Neighborhood Playhouse in New York and the Royal Academy of Dramatic Art in London. She attended The Neighborhood Playhouse the same years as actor Dylan McDermott.

Janney's first roles on television were as comedic foils on soap operas: she first played Vi Kaminski for a short time on As the World Turns, following up with a two-year stint as one of the Spaulding maids, Ginger on Guiding Light. In the spring of 1994, she appeared in the season finale of Law & Order, as a reluctant witness against a member of the Russian mob.

She has appeared in a number of films with roles of various sizes, including the 1990s films American Beauty, The Object of My Affection, Big Night, The Impostors, Drop Dead Gorgeous, The Ice Storm, Primary Colors, 10 Things I Hate About You, and Private Parts, and the 2000s films Nurse Betty, The Hours, The Chumscrubber, How to Deal, Winter Solstice and a considerable role in the animated movie, Finding Nemo, voicing Peach, the starfish. In 2006, Janney carried notable roles in the feature films Margaret and Over the Hedge.