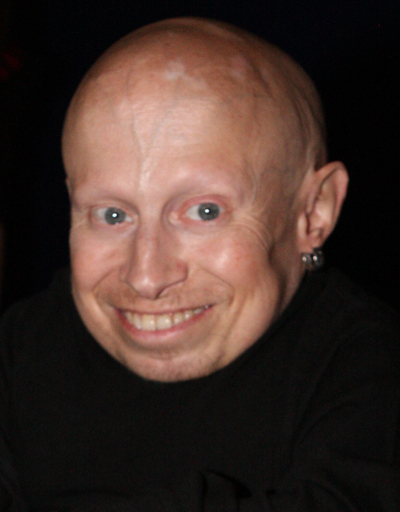 Verne J. Troyer (born January 1, 1969) is an American actor and stunt performer. Troyer is notable for his height of 2 ft 8 in (0.81 m), the result of cartilage–hair hypoplasia dwarfism, making him one of the shortest men in the world. He is best known for playing Mini-Mein the Austin Powers series of comedy films.

Troyer was born in Sturgis, Michigan, the son of Susan, a factory worker, and Reuben Troyer, a repair technician. He has two siblings, Davon and Deborah. He grew up in Centreville, Michigan and graduated from Centreville High School in 1987.

Troyer reportedly married model Genevieve Gallen on February 22, 2004 but filed for an annulment the next day. Though the couple's engagement was widely reported, Troyer and his attorney deny that the two ever had any formal wedding plans, saying that Gallen had fabricated the story for her own financial gain.

It was announced on the March 29, 2013 that Troyer would be the Grand Marshall in the Paris, Tennessee Fish Fry Parade. He has also struggled with several addictions, including cocaine-addiction and alcoholism.