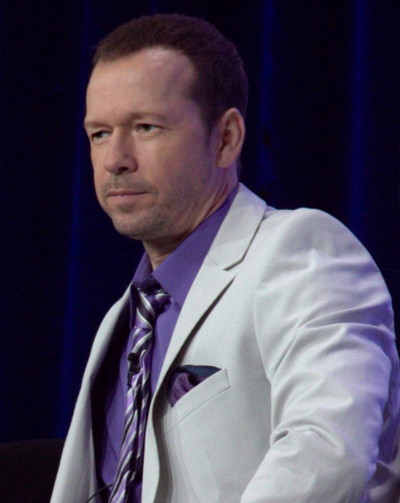 Donald Edmond "Donnie" Wahlberg, Jr. (born August 17, 1969) is an American singer, actor and film producer. He is a member of the popular boy band New Kids on the Block. Donnie's work background includes music, feature films, and television. Wahlberg has had featured roles in the Saw films, The Sixth Sense, Dreamcatcher, and Righteous Kill, also appearing in the award-winning World War II miniseries Band of Brothers. From 2002-2003 he starred in the critically acclaimed but short lived crime drama Boomtown. Currently, he is starring in the critically acclaimed drama series Blue Bloods with Tom Selleck and Bridget Moynahan and is an executive producer of the TNT reality television show "Boston's Finest". Wahlberg was nominated for Choice Scream at the 2008 Teen Choice Awards for his work on the Saw films.

Wahlberg was born in the Dorchester neighborhood of Boston, Massachusetts, is the eighth of nine children, with older siblings Arthur, Jim, Paul, Robert, Tracey, Michelle, Debbie (died 2003) and younger brother Mark. He also has three half-siblings from his father's first marriage- Donna, Scott and Buddy. His mother, Alma Elaine (née Donnelly), was a bank clerk and nurse's aide, and his father, Donald Edmond Wahlberg, Sr. (May 8, 1930 - February 14, 2008) was a teamster who worked as a delivery driver; the couple divorced in 1982. He is of Swedish, Irish, English, and French Canadian ancestry.

As a recording artist, Wahlberg is known as an original member of boy band New Kids on the Block.

Wahlberg's first film acting role was in the 1996 film Bullet with Mickey Rourke and Tupac Shakur. Also in 1996, he appeared as a kidnapper in Ransom with Mel Gibson. He went back to his home town for a starring role in the South Boston-based film Southie. Wahlberg received attention for his role in the 1999 film The Sixth Sense, playing the patient of Bruce Willis's character in the opening sequence. This role was originally intended for a 13-year-old boy until Wahlberg met with writer and director M. Night Shyamalan to inquire about obtaining the rights for a theatre production, and ended up getting the role.

In 2001, Wahlberg co-starred as Second Lieutenant C. Carwood Lipton in the television miniseries Band of Brothers. Wahlberg also starred in the 2002–2003 NBC drama series Boomtown as Joel Stevens, a Los Angeles police detective. Graham Yost, executive producer and writer of Boomtown, had worked with Wahlberg in Band of Brothers and was so impressed by his performance that he wrote the role of Joel Stevens specifically for him.

2003 was the year that Wahlberg starred alongside Timothy Olyphant, Jason Lee, and his Band of Brothers co-star Damian Lewis as the mentally challenged Duddits in William Goldman and Lawrence Kasdan's adaptation of the Stephen King alien-invasion thriller, Dreamcatcher. In 2005, Wahlberg starred as Detective Eric Matthews in the second installment of the Saw series. He reprised the role in Saw III in 2006 and Saw IV in 2007, also appearing in Saw V in 2008 via archive footage from the previous films.

Wahlberg married Kim Fey on August 20, 1999. He and Fey have two children, Xavier Alexander Wahlberg (born March 4, 1993) and Elijah Hendrix Wahlberg (born August 20, 2001). Wahlberg and Fey filed for divorce on August 13, 2008, citing "irreconcilable differences". As of July 2013 it was reported by Us Weekly that Wahlberg is reported to be dating actress and comedienne Jenny McCarthy after meeting on her radio show in March.