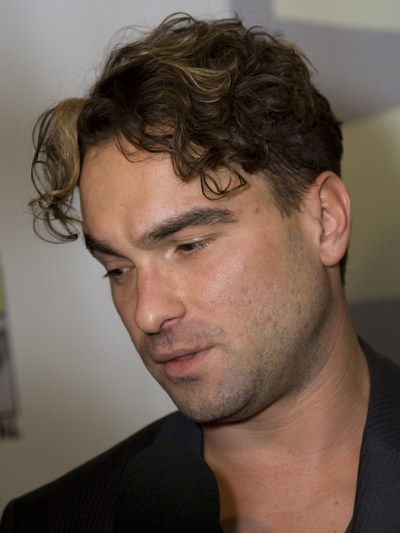 John Mark "Johnny" Galecki (born April 30, 1975) is an American actor. He is best known for his roles as David Healy in the ABC sitcom Roseanne, Rusty Griswold in National Lampoon's Christmas Vacation, and Leonard Hofstadter in the CBS sitcom The Big Bang Theory.

Galecki was born in Bree, Belgium, to American parents of Polish, Irish, and Italian descent. His mother, Mary Lou (née Noon), was a mortgage consultant, and his father, Richard Galecki (deceased), was a member of the U.S. Air Force stationed in Belgium and also worked as a rehabilitation teacher. Galecki grew up in Oak Park, Illinois.

During an interview with New Zealand radio station ZM, Galecki recalled his childhood relationship with his mother. As a child, he was well known for making up long stories and tales. In such situations, his mother used to make him play the "quiet game", where he had to see how long he could go without talking. He also recalled that despite being a loving mother, she was also very tough. One phrase she would lovingly use was, "I love you, now get out."

Galecki made his acting debut in the 1987 CBS miniseries Murder Ordained with JoBeth Williams and future Roseanne co-star John Goodman. In 1989, Galecki portrayed Rusty Griswold in National Lampoon's Christmas Vacation. One of his best known roles was as David Healy (first introduced as Kevin Healy) in the U.S. sitcom Roseanne. He also appeared in the 1995 music video for the Dave Matthews Band song "Satellite". Galecki was cast in the 1997 summer slasher I Know What You Did Last Summer and the 1998 dark comedy The Opposite of Sex. In the year 2000, Galecki reunited with Opposite of Sex director Don Roos, who cast him in Bounce.