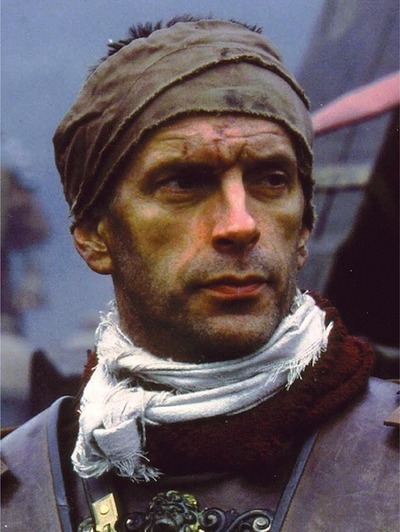 Arana was born in Auburn, California. He grew up in San Francisco and studied classical theatre at the American Conservatory Theater and at the City College of San Francisco. Afterwards he relocated to New York and acted in off-Broadway productions. He then hitchhiked throughout Europe and ended up living in Naples, Italy, where he worked in the famous Lucio Amelio Art Gallery. There he worked with such artists as Warhol, Beuys, Rauschenberg, Richter, Longobardi, Clemente, Gilbert & George, etc. Andy Warhol painted his portrait, which is now part of Arana's extensive art collection. He lives between Italy and Hollywood and has three sons.

Arana has played leading and supporting roles in over 30 European productions including films by directors such as Lina Wertmüller, Liliana Cavani, Carlo Verdone, Michele Soavi and with one of Japan's most successful directors: Koreyoshi Kurahara in the Toho production See You. He appeared as Quintus in Ridley Scott's epic motion picture Gladiator, and he also appeared in the second film of the Bourne series, The Bourne Supremacy. In theatre, Arana was the producer and a leading actor in the internationally acclaimed theatre company Falso Movimento, based in Naples, Italy. Under Arana and artistic director Mario Martone (now an Italian film director), Falso Movimento won many awards including Best Play of the Year and Best Set Design, as well as the Mondello Prize.

Arana also played the GRU sleeper agent Loginov in the 1990 film version of Tom Clancy's novel The Hunt for Red October, the would-be killer in 1992's The Bodyguard starring superstars Kevin Costner and Whitney Houston, a Belarusian resistance leader in Edward Zwick's 2008 film Defiance, and The Man In The Tan Coat in 2011's Limitless alongside Bradley Cooper and Robert De Niro. He appeared in the third installment of Christopher Nolan's Batman trilogy, The Dark Knight Rises, as Bruce Wayne's lawyer. In 2013 Arana performed as mysterious assassin in the miniseries Crimes of the German television broadcaster ZDF, a role without any text.