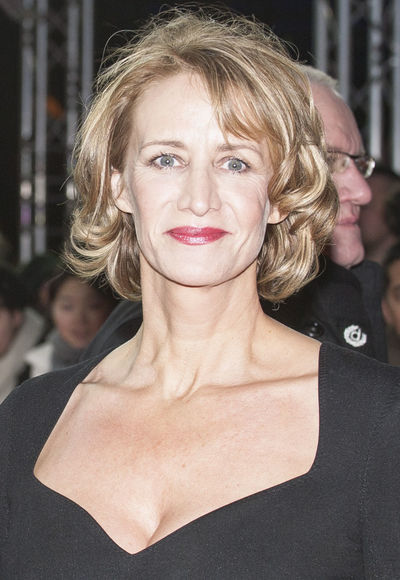 McTeer made her professional stage debut in 1984, and was nominated for the 1986 Olivier Award for Best Newcomer for The Grace of Mary Traverse. Other theatre roles include Yelena in Uncle Vanya (London), Veronique in God of Carnage (London & New York) and the title role in Mary Stuart (London & New York), which won her a second Drama Desk Award in 2009. On television, she starred in the title role of Lynda La Plante's The Governor (1995–96), received an Emmy Award nomination for Into the Storm (2009) and a Golden Globe nomination for The White Queen (2013). She also appeared opposite Glenn Close in the final season of the drama series Damages (2012). Her other film roles include Hawks (1988), Wuthering Heights (1992), Carrington (1995), Songcatcher (2000) and As You Like It (2006).

McTeer was born in Wallsend, Newcastle upon Tyne, England, the daughter of Jean (née Morris) and Alan McTeer, and spent her childhood in York. She attended the now defunct Queen Anne Grammar School for Girls, and worked at the Old Starre Inn, at York Minster and at the city's Theatre Royal. She performed locally with the Rowntree Players at Joseph Rowntree Theatre, then trained at the Royal Academy of Dramatic Art, beginning a successful theatrical career with the Royal Exchange Theatre after graduating.

McTeer's television work includes the BBC production Portrait of a Marriage, an adaptation of Nigel Nicolson's biography of the same name in which she played Vita Sackville-West, and the popular ITV series The Governor written by Lynda La Plante. She made her screen debut in Half Moon Street, a 1986 film based on a novel by Paul Theroux. In 1991, she appeared in Catherine Cookson's The Black Velvet Gown, with Bob Peck and Geraldine Somerville; this won the International Emmy award for best drama. She appeared in the 1992 film version of Wuthering Heights (co-starring Juliette Binoche and Ralph Fiennes) and the 1995 film Carrington (which starred Emma Thompson and Jonathan Pryce) as Vanessa Bell.

In 1996, McTeer garnered critical acclaim - and both the Laurence Olivier Theatre Award and Critics' Circle Theatre Award for her performance as Nora in a West End production of Henrik Ibsen's A Doll's House. The following year, the production transferred to Broadway, and McTeer received a Tony Award, Theatre World Award, and Drama Desk Award as Best Actress in a Play.

During the show's run, McTeer was interviewed by Charlie Rose on his PBS talk show, where she was seen by American filmmaker Gavin O'Connor, who, at the time, was working on a screenplay about a single mother's cross-country wanderings with her pre-teenage daughter. He was determined that she star in the film. When prospective backers balked at her relative anonymity in the US, he produced the film himself. Tumbleweeds proved to be a 1999 Sundance Film Festival favourite, and McTeer's performance won her a Golden Globe as Best Actress and Academy Award and Screen Actors Guild nominations in the same category.

McTeer's screen credits include Songcatcher (with Aidan Quinn), Waking the Dead (with Billy Crudup and Jennifer Connelly), the dogme film The King Is Alive (with Jennifer Jason Leigh), The Intended (with Brenda Fricker and Olympia Dukakis), and Tideland, written and directed by Terry Gilliam. She also starred in the dramatisation of Mary Webb's Precious Bane. She has appeared in such British television serials as The Amazing Mrs Pritchard, Hunter, and Agatha Christie's Marple (episode: "The Murder at the Vicarage").

McTeer played Mary, Queen of Scots in Mary Stuart, a play by Friedrich Schiller in a new version by Peter Oswald, directed by Phyllida Lloyd. She acted opposite Harriet Walter as Queen Elizabeth I in London's West End in 2005, a role she reprised in the 2009 Broadway transfer. McTeer received a Tony Award nomination for her role in Mary Stuart, and won the Drama Desk Award, Outstanding Actress in a Play.

In 2011, McTeer starred alongside Glenn Close in Albert Nobbs and with Daniel Radcliffe and Ciarán Hinds in The Woman in Black, based on the 1983 novel of the same name. Her role as Hubert Page in Albert Nobbs won McTeer critical acclaim and numerous award nominations, including an Academy Award nomination for Best Supporting Actress. It was announced in November 2011 that McTeer had joined the cast of Damages for its fifth and final season (reuniting her with her Albert Nobbs co-star Glenn Close), playing Kate Franklin. She played American novelist Mary McCarthy in Margarethe von Trotta's feature Hannah Arendt.

In 2013 McTeer was cast as Jacquetta of Luxembourg, the mother of the title character in The White Queen, a British television drama series based on Philippa Gregory's bestselling historical novel series The Cousins' War. Her performance was applauded, with Sam Wollaston of The Guardian suggesting she stole the show. In December 2013, McTeer was nominated for a Golden Globe for Best Supporting Actress for her role as Jacquetta. On 29 July 2013, it was announced that McTeer had joined the cast of The Honourable Woman, an upcoming BBC spy thriller television miniseries, starring Maggie Gyllenhaal. In 2015, McTeer starred as Commander Kim Guziewicz in CBS comedy-drama Battle Creek, and is currently filming The Kaiser's Last Kiss (in which she is due to portray Princess Hermine Reuss of Greiz), set for a 2016 release.