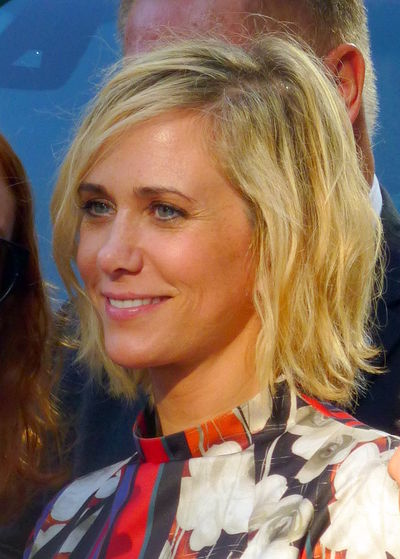 Born in Canandaigua, New York, and brought up in Lancaster, Pennsylvania and Rochester, New York, Wiig attended the University of Arizona, majoring in Art. She later relocated to Los Angeles, where she broke into comedy as a member of the improvisational comedy troupe The Groundlings and made her television debut in 2003. Wiig joined the cast of Saturday Night Live in 2005 and the following year she co-starred in the Christmas comedy film Unaccompanied Minors. After appearing in a series of supporting roles in comedy films such as Knocked Up, Adventureland, Whip It, and Paul, she also starred in and wrote the screenplay for Bridesmaids, which was both critically and commercially successful.

Wiig has received seven consecutive Emmy Awards nominations and has been nominated for an Annie Award for Voice Acting in a Feature Production for her work on Despicable Me 2. In 2012, Bridesmaids earned her a Golden Globe Award nomination for Best Actress – Musical or Comedy, as well as nominations for the Academy Award and BAFTA for Best Original Screenplay and a SAG Award nomination for Outstanding Performance by a Cast. She was also nominated for a Primetime Emmy Award for Outstanding Lead Actress in a Miniseries or a Movie for her role as Cynthia Morehouse in the miniseries The Spoils of Babylon.

Wiig was born in Canandaigua, New York, the daughter of Laurie J. (née Johnston), an artist, and Jon J. Wiig, who ran a lake marina in Western New York. Her father is of Norwegian and Irish ancestry and her mother is of English and Scottish descent. The name Wiig comes from the area of Sogn og Fjordane in Norway. Wiig moved with her family to Lancaster, Pennsylvania, at the age of three, and attended Nitrauer Elementary School. She later moved to Rochester, New York, where she attended the prestigious Allendale Columbia School for ninth and tenth grade and graduated from Brighton High School. Wiig attended the University of Arizona, majoring in Art. When she took an acting class in college to fulfill a course requirement, the teacher suggested she continue to act.  She expected to start out a job at a plastic surgery clinic drawing pictures of people's post-surgery bodies, but decided to move to LA and act. Kristen dropped out of school and relocated to Los Angeles, where she joined The Groundlings while working odd jobs to support herself. Being a part of the comedy group improved her skills.

Wiig's work has mostly been in comedy, including performing at the Empty Stage Comedy Theatre and with The Groundlings. In 2003, she appeared in the Spike TV show The Joe Schmo Show, a spoof of reality television, in which she played "Dr. Pat", the quack marriage counselor.

Wiig debuted on Saturday Night Live shortly into Season 31, on November 12, 2005. She survived an SNL budget cut becoming a full member of the repertory cast at the beginning of Season 32 in 2006. Her characters include Penelope, a neurotic attention-seeker; Kat, half of the musical duo Garth and Kat (frequently appearing on Weekend Update alongside Fred Armisen); Dooneese Maharelle on the Lawrence Welk show; Mindy Grayson in the Secret Word sketches, Gilly, a mischievous schoolgirl; Sue, who can't control her excitement over surprises; The Target Lady, a clerk at the chain store and kitsch collector; Shanna, a sexy woman whose actions and stories gross people out; Cheryl Bryant, a TV game show host who gives away big prizes and is always more excited about the prize than the winners are; Judy Grimes, a nervous travel agent; Jacqueline Seka, predatory host of the Cougar Den; and Aunt Linda, a hard-to-please movie critic, both frequently appearing on Weekend Update. She has also played real-life people, such as Björk, Suze Orman, Lana Del Rey, Kathie Lee Gifford, Elisabeth Hasselbeck, Drew Barrymore, Taylor Swift, Gwen Stefani, Liza Minnelli, Jamie Lee Curtis, Christine O'Donnell, former Speaker of the House Nancy Pelosi, Congresswoman Michele Bachmann and socialite Kris Jenner.

Wiig made her film debut in the 2006 Christmas movie Unaccompanied Minors The following year, she appeared in Judd Apatow's comedy Knocked Up as a passive-aggressive assistant and performed in Jake Kasdan's Walk Hard, another Apatow-produced film. In 2008, she had small roles in several films, including Forgetting Sarah Marshall and David Koepp's Ghost Town. In 2009, Wiig had supporting roles in Greg Mottola's Adventureland, Mike Judge's Extract, and Whip It, Drew Barrymore's directorial debut. In 2010, she appeared in the films MacGruber, the animated comedies Despicable Me and Despicable Me 2, and Andrew Jarecki's All Good Things. Wiig had her first lead role as Ruth Buggs in Greg Mottola's comedy Paul in 2011.

Later in 2011, she starred in the film Bridesmaids, which she co-wrote with fellow Groundlings performer Annie Mumolo for Universal Pictures, released on May 13, 2011. The film became both a critical and box office success, receiving two nominations for Best Picture-Musical or Comedy and Wiig herself was nominated for Best Actress-Motion Picture, Musical or Comedy at the 69th Golden Globe Awards. The film also received two Academy Award nominations, including Best Original Screenplay for which Wiig and Mumolo were nominated. The second nomination was for Best Supporting Actress for co-star Melissa McCarthy. The film grossed over $280 million worldwide.

Wiig was married to actor Hayes Hargrove from 2005 to 2009. She is a vegetarian.