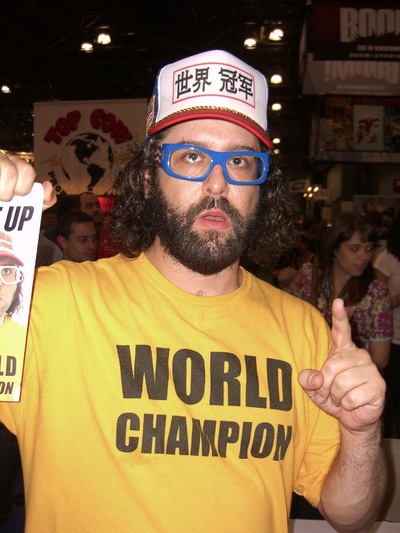 Judah Friedlander (born March 16, 1969) is an American actor and comedian, best known for playing the role of writer Frank Rossitano on the NBC sitcom 30 Rock. Friedlander is also known for his role as Toby Radloff in the film American Splendor, a role garnered him favorable reviews and a nomination for best supporting actor at the 2004 Independent Spirit Awards. Earlier in his career he was recognized as "the hug guy" from the music video for the 2001 Dave Matthews Band single "Everyday".

Friedlander is known for his distinctive look, which includes oversized glasses, shaggy hair, a t-shirt and trucker hat — often emblazoned with bombastic slogans such as "World Champion" — and a generally unkempt appearance. It is a look he maintains as a stand-up comedian, during most of his public appearances, and which he has employed in some of his acting roles.

Friedlander was born in Gaithersburg, Maryland, the son of Shirley and Art Friedlander. His father was of Russian Jewish descent and his mother, a native of Pittsburgh, is Croatian American.

As a child, Friedlander drew political cartoons and made animated films. He first tried stand-up comedy in 1989 at the age of 19 while attending New York University.

Friedlander has performed stand-up comedy regularly throughout his entertainment career. He continued to perform stand-up several nights a week in New York City while working on the sitcom 30 Rock. Friedlander has stated that he is most relaxed when doing stand-up and that he considers stand-up to be his first true love, preferring it to acting.