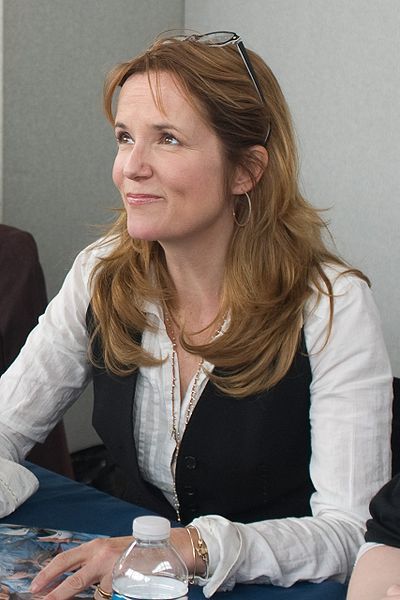 Lea Kathleen Thompson (born May 31, 1961) is an American actress, television director and television producer. She is known for her role as Lorraine Baines in the Back to the Future trilogy and as the title character in the 1990s NBC sitcom Caroline in the City. Other films she is known for include All the Right Moves, The Beverly Hillbillies, Howard the Duck, Jaws 3-D, Red Dawn, and Some Kind of Wonderful. Since 2011 she has co-starred as Kathryn Kennish in the ABC Family series Switched at Birth.

Thompson was born in Rochester, Minnesota, the daughter of Barbara Anne (née Barry), a singer and musician, and Clifford Elwin "Cliff" Thompson. She studied ballet as a girl and practiced three to four hours every day. She was dancing professionally by the age of 14. She won scholarships to several ballet schools, including the American Ballet Theatre, the San Francisco Ballet, and the Pennsylvania Ballet. Thompson danced in more than 45 ballets with the American Ballet Theatre. She also danced with the Pennsylvania Ballet, the Minnesota Dance Theatre and the Ballet Repertory. Her brother Andrew also took ballet classes and went on to become a professional.

Thompson was told by ballet legend and then ABT artistic director Mikhail Baryshnikov that she was "a beautiful dancer, but too stocky." Due to this (as well as some small nagging past injuries), she decided to give up dancing in favor of an acting career. She moved to New York at age 20 and performed in a number of Burger King advertisements in the 1980s along with Sarah Michelle Gellar and Elisabeth Shue, her eventual co-star in Back to the Future Part II and Back to the Future Part III.

Thompson's first significant film roles came in 1983, with Jaws 3-D and All the Right Moves (the latter opposite Tom Cruise). These were followed by Red Dawn (1984) and The Wild Life (1984). In a 2008 interview, she explained that she learned tactics and how to shoot and field strip Soviet weapons for the film Red Dawn.

Thompson's most famous role was that of Lorraine Baines McFly in the Back to the Future trilogy, the first film released in 1985. Thompson's character is the mother of Marty McFly, played by Michael J. Fox, whom Marty meets at an adolescent age after he travels back in time: he has to avoid having Lorraine fall in love with him instead of with his future father George (Crispin Glover), which leads to some awkward scenes when Lorraine is clearly attracted to him.

In 1986, Thompson starred in SpaceCamp and Howard the Duck. For the latter film, she sang several songs on the soundtrack, in character, as musician Beverly Switzler, who was the lead vocalist for a band called Cherry Bomb. The recordings appeared on both the soundtrack album and on singles. Rounding out film appearances in the late 1980s, Thompson starred in Some Kind of Wonderful, Casual Sex?, Going Undercover and The Wizard of Loneliness. She also had a prominent role in the 1989 TV film Nightbreaker, for which she was nominated for a CableACE Award. In the early 1990s, Thompson starred as the mother of the titular character in Dennis the Menace (1993), the villainess in The Beverly Hillbillies (1993) and a snooty ballet instructor in The Little Rascals (1994). She also appeared in several TV film throughout the 1990s, including The Substitute Wife (1994) and The Right To Remain Silent (1996).

Thompson found moderate critical and popular success as the star of the NBC sitcom Caroline in the City, from 1995 to 1999. In 1996, Thompson received a People's Choice Award for "Favorite Female Performer in a New TV Series".

Thompson has been married to film director Howard Deutch since 1989. They first met on the set of the 1987 film Some Kind of Wonderful.

Thompson and Deutch have two daughters, Madeline and Zoey, with whom she sang on stage in the Bye Bye Birdie production for the 16th annual Alzheimer's Association "A Night at Sardi's" in March 2008. Both daughters are actresses. Thompson has stated that her career break to raise her daughters helped with her subsequent portrayal of soccer mom Cathy Davis in the Jane Doe TV movie series.