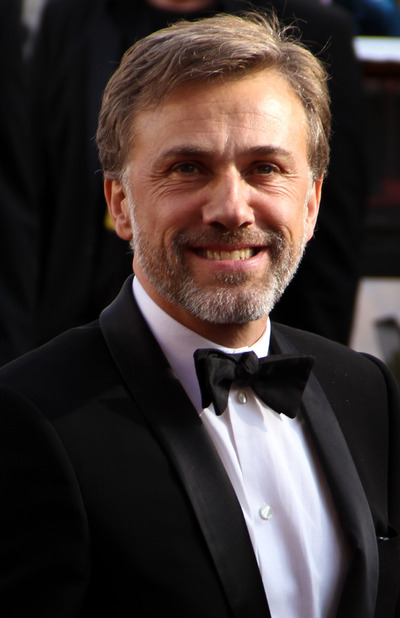 Christoph Waltz (born October 4, 1956) is a German-Austrian actor. He is best known for his works with American filmmaker Quentin Tarantino, receiving acclaim for portraying SS-Standartenführer Hans Landa in Inglourious Basterds (2009) and bounty hunter Dr. King Schultz in Django Unchained (2012). For each performance, he won an Academy Award, a BAFTA Award, and a Golden Globe Award for Best Supporting Actor. Additionally, he received the Best Actor Award at the Cannes Film Festival and a Screen Actors Guild Award for his portrayal of Landa. Waltz will appear as Franz Oberhauser in Spectre, the twenty-fourth James Bond film.

Waltz was born in Vienna, the son of German-born Johannes Waltz and Austrian-born Elisabeth Urbancic, set and costume designers. His maternal grandfather, Rudolf von Urban, was a psychiatrist and psychologist who wrote the book Sex Perfection and Marital Happiness. His maternal grandmother was Burgtheater actress Maria Mayen, and his step-grandfather was actor Emmerich Reimers. His great-grandparents also worked in theatre.

Waltz studied acting at the Max Reinhardt Seminar in Vienna. He also attended the Lee Strasberg Theatre and Film Institute in New York. He started as a stage actor, performing at venues such as Zurich's Schauspielhaus Zürich, Vienna's Burgtheater, and the Salzburg Festival. He became a prolific television actor in the years 1980 to 2000. In 2000, he made his directorial debut, with the German television production Wenn man sich traut. Before coming to the attention of a larger audience in Tarantino's Inglourious Basterds he had played Dr. Hans-Joachim Dorfmann in the British TV series The Gravy Train in 1990. The show is a story of intrigue and misdeeds set in the offices of the European Union in Brussels.

In Quentin Tarantino's 2009 film Inglourious Basterds, Waltz portrayed SS-Standartenführer Hans Landa, aka "The Jew Hunter". Clever, courteous, and multilingual, but also self-serving, cunning, implacable, and murderous, the character of Landa was such that Tarantino feared he "might have written a part that was un-playable". Waltz received the Best Actor Award for the performance at the 2009 Cannes Film Festival and received acclaim from critics and the public. In 2009, he began sweeping critics' awards circuits, receiving awards for Best Supporting Actor from the New York Film Critics Circle, the Boston Society of Film Critics, Los Angeles Film Critics Association, and for Best Supporting Actor at the 67th Golden Globe Awards and the 16th Screen Actors Guild Awards in January 2009.

The following year, he won the Academy Award for Best Supporting Actor and won the BAFTA for Best Supporting Actor. He is, as of 2013, the only actor to win an Academy Award for appearing in a Tarantino film. Tarantino acknowledged the importance of Waltz to his film by stating: "I think that Landa is one of the best characters I've ever written and ever will write, and Christoph played it to a tee. It's true that if I couldn't have found someone as good as Christoph I might not have made Inglourious Basterds".

Waltz has three children with his first wife. He is raising a daughter (b. 2005) with his wife, costume designer Judith Holste. They divide their time between Berlin, London, and Los Angeles.