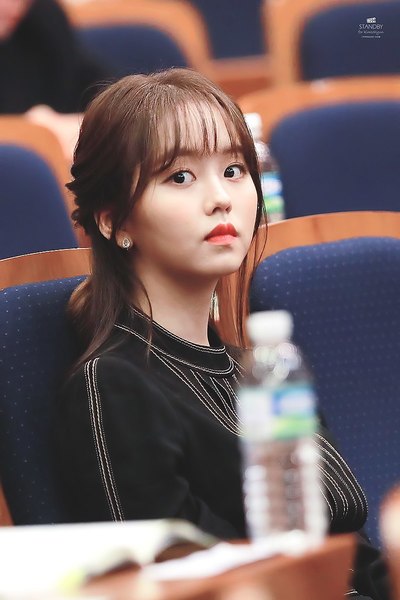 Kim So-hyun (Korean: 김소현; Hanja: 金所炫; born June 4, 1999) is a South Korean actress who began her career as a child actress in 2006 and initially gained public attention for playing a villainous young queen-to-be in Moon Embracing the Sun (2012) and a girl who falls into tragedy in Missing You (2013). She was then affectionately labeled as "Nation's Little Sister". She took on her first leading role in teen drama Who Are You: School 2015 (2015) and since then, has starred in horror comedy Hey Ghost, Let's Fight (2016), historical melodrama The Emperor: Owner of the Mask (2017) and romantic comedy Radio Romance (2018) and Love Alarm (2019).

Kim So-hyun was born in Australia. She moved to South Korea in 2003 when she was four years old, and graduated from Yongin Munjung Middle School in 2015. She was homeschooled for her secondary education, and enroll at Hanyang University's Department of Theater, through rolling admission, in 2018.

In January 2018, the Pyeongchang Organizing Committee for the 2018 Olympic & Paralympic Winter Games (POCOG) chose Kim and Yoo Seung-min as the National Representative of Honorary Smile to represent Korea's smile and kindness.

Kim debuted as a child actress under Sidus HQ, playing a supporting role in the 2006 Drama City special titled Ten Minute Minor. She continued to portray the child counterparts of the female protagonists in television series as well as in films, and build her credits.

She gained public attention in 2012 when she featured in the fantasy-period drama Moon Embracing the Sun as the younger version of the second female lead. This was followed by well-received supporting turns in fantasy-comedy Rooftop Prince and melodrama Missing You, for which she received her first acting award as "Best Child Actress" at the 1st K-Drama Star Awards.

In 2013, Kim became a co-host of MBC's music program Music Core along with Minho of SHINee and Noh Hong-chul.

In 2015, Kim starred in KBS's school series Who Are You: School 2015, playing dual roles as twins Lee Eun-bi and Go Eun-byul. She was awarded "Star of the Year" at the 8th Korea Drama Awards for her performance.

Kim then starred in the historical drama The Emperor: Owner of the Mask which premiered in May 10, 2017. In August 2017, she ended her contract with her agency Sidus HQ, after seven years in the company. In December, Kim launched her own one-person agency, E&T Story Entertainment, in partnership with LOEN Entertainment. The agency is currently led by Park Chan-woo, Kim's manager in her SidusHQ days.

In 2018, Kim starred in romance drama Radio Romance, which began airing on January 29.

In 2019, Kim is set to star in Netflix's original production Love Alarm, based on the webtoon of the same name; and The Tale of Nokdu, a KBS romantic comedy drama set in the Joseon dynasty.

In 2017, Kim So Hyun and Ji Chang-wook donated their dubbing fees for Your Name to the Korea Barrier-Free Film Commission.

On April 5, 2019, Kim So-hyun donated ₩10million to help support the victims of Sokcho Fire. Kim donated ₩10million with her fans to Ajou University Hospital Trauma Center. This is the result of the fan's giving support towards Kim's idea who wanted to achieve and sharing on her June 4 birthday. Her fans also donated 61 blood donation certificate to the hospital along with the fund to help patients who were living with difficulties.