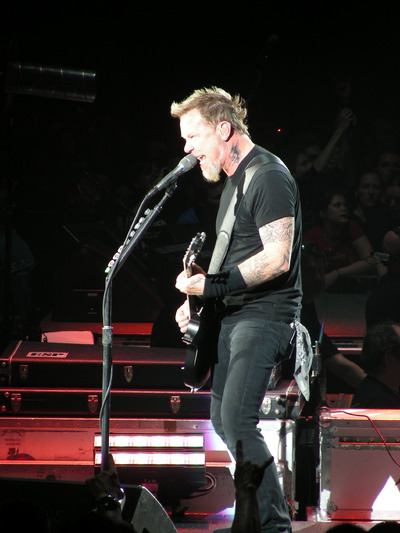 Hetfield was born August 3, 1963. He is of German, English, Irish and Scottish descent. He has two older half-brothers from his mother's first marriage and one younger sister. He attended Downey High School his freshman and sophomore years. He graduated from Orange County's Brea Olinda High School in 1981.

His father, Virgil, was a truck driver. His mother, Cynthia, was a light opera singer. The two divorced in 1976 when Hetfield was young. Virgil and Cynthia were very strict Christian Scientists, and in accordance with their beliefs, Hetfield's parents strongly disapproved of medicine or any other medical treatment and remained loyal to their faith even as Cynthia was dying from cancer. This upbringing became the inspiration for many of Hetfield's lyrics later in his career with Metallica, such as songs like "The God That Failed".

Cynthia Hetfield died of cancer in 1979 when James was 16 years old. After the death of his mother, Hetfield went to live with his older half-brother David. Virgil died in late 1996, during Metallica's Load tour.

Hetfield was nine years old when he first began piano lessons, after which he took on his brother David's drums and finally, at the age of fourteen, he began to play guitar with Robert Okner . He also was in a few bands as a teenager – one being Leather Charm and another, Obsession.

Hetfield identifies Aerosmith as having been his main musical influence as a child, and has said they were the reason he wanted to play guitar. He also cited Led Zeppelin, Black Sabbath, AC/DC, Motörhead, Thin Lizzy, Ted Nugent and Deep Purple as important influences. Also The Beatles were an important influence for him, despite being a non-metal band.

In the early days of the band, Metallica experimented with a few different vocals and guitar combinations, essentially creating a setup similar to that of Diamond Head. Some of the options considered included adding another guitar player, having John Roads play lead guitar, as well as asking John Bush from Armored Saint (who later joined Anthrax) to sing for the band. The finalized line-up of the band became Hetfield (lead vocals and rhythm guitar), Lars Ulrich (drums), Dave Mustaine (lead guitar), and Ron McGovney (bass) who was replaced by Cliff Burton soon. Hetfield referred to their early sound as Power Metal. The term "thrash Metal" was first used when Kerrang journalist Malcolm Dome described the Anthrax song "Metal Thrashing Mad" in Kerrang issue number 62, page 8 published on February 23, 1984.

From 1982 to 1983, Mustaine's alcoholism sparked heated altercations between Hetfield and himself. Mustaine also once poured beer onto Ron McGovney's bass nearly causing serious damage. On April 1, 1983, the band recruited lead guitarist Kirk Hammett from the band Exodus and 10 days later Hetfield and Ulrich officially removed Mustaine from the band due to his alcoholic tendencies. Mustaine was sent home on a 4-day bus journey, and went on to form the heavy metal band Megadeth. Later, Mustaine would be quoted to wonder why Metallica did not send him to rehab, but the other band members themselves drank heavily, Hetfield in particular, though Mustaine's alcoholism was of a more aggressive nature.

Until the mid-1990s, Hetfield recorded all rhythm tracks and most harmony tracks.[citation needed] Since the recording of Load, Hammett is recording rhythm guitars as well. Hetfield occasionally plays guitar solos on songs such as "Nothing Else Matters", "My Friend of Misery", the outro solo on "The Outlaw Torn", the second solo on "To Live Is to Die", the first solo on "Suicide and Redemption", the first interlude solo on "Master of Puppets", the harmonized solo on "Orion" and the introduction harmonic solo in "The Day That Never Comes". He also writes the majority of the guitar harmonies, as well as writing the lyrics, vocal melodies, and co-arranging the songs with Ulrich.

On April 4, 2009, Hetfield, along with remaining Metallica members Ulrich, Hammett, Trujillo, as well as former bassist Newsted and the deceased Cliff Burton were inducted into the Rock and Roll Hall of Fame. In an interview after their nomination, Hetfield commented that everyone who had appeared on an album with the band would be inducted. This excluded original guitarist Dave Mustaine and original bassist Ron McGovney, as both had appeared only on the band's early demo tapes.

Hetfield was ranked 24th in the Hit Parader's Top Metal Vocalist of All Time. In 2009 he was listed at number 8 in Joel McIver's book The 100 Greatest Metal Guitarists.