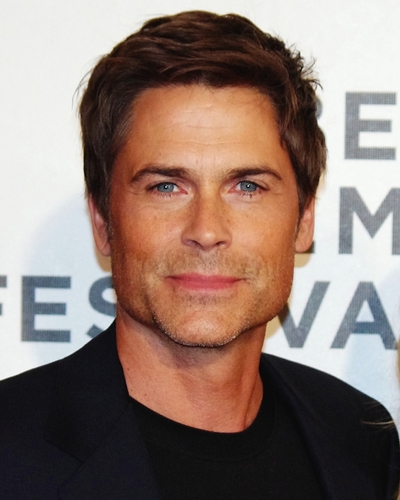 Robert Hepler "Rob" Lowe (born March 17, 1964) is an American film and television actor. He garnered fame after appearing in such films as The Outsiders, Oxford Blues, About Last Night..., St. Elmo's Fire, Wayne's World, Tommy Boy, and Austin Powers: The Spy Who Shagged Me. On television, he played Sam Seaborn on The West Wing and Senator Robert McCallister on Brothers & Sisters. He is currently appearing on Parks and Recreation as Chris Traeger, but is scheduled to leave around the middle of the sixth season. Most recently, Lowe played the role of President John F. Kennedy in Killing Kennedy, a made-for-television movie that premiered November 10, 2013 on National Geographic Channel (or Nat Geo).

Lowe was born in Charlottesville, Virginia, the son of Barbara Lynn (née Hepler), a schoolteacher and native of Ohio, and Charles Davis Lowe, a trial lawyer. His parents divorced when Lowe and his younger brother, actor Chad, were very young. Lowe also has two half-brothers. Because of a virus during infancy, he is deaf in his right ear (he later played a deaf character in Stephen King's The Stand).

Lowe was baptized into the Episcopal church. He is of German, English, Irish, Scottish, and Welsh ancestry. He was raised in a "traditional midwestern setting" in Dayton, Ohio, attending Oakwood Junior High School, before moving to the Point Dume area of Malibu, California with his mother and brother.

One of Lowe's earliest roles came in the 1983 TV film Thursday's Child, for which he received his first Golden Globe Award nomination for Best Supporting Actor in a Series, Miniseries, or Television Film. His first big screen debut, and consequently his breakthrough, came in 1983, when he and Emilio Estevez were cast in Francis Ford Coppola's The Outsiders. Lowe played the role of Sodapop Curtis, the brother of the main character Ponyboy Curtis (C. Thomas Howell) and Darrel Curtis (Patrick Swayze). Lowe and Estevez reunited in St. Elmo's Fire, making them the two more prominent actors from the group known as the Brat Pack. About Last Night... followed, with Demi Moore (who had starred with Lowe in St. Elmo's Fire). He then received his second Golden Globe Award nomination for Best Supporting Actor for his role as the mentally disabled Rory in Square Dance(1987).

Lowe is best known for playing Sam Seaborn in the television series The West Wing from 1999 to 2003. His performance in the show garnered Lowe a Primetime Emmy Award nomination and two Golden Globe Award nominations for Best Actor in a Drama Series. Lowe was drawn to the role because of his personal love of politics, and his longstanding personal relationship with Martin Sheen, who was cast as President Bartlet. When the show premiered, Seaborn was considered the lead, and the pilot centered on the character. But the acclaimed cast of the show—including Allison Janney, Richard Schiff, Dulé Hill, John Spencer, Bradley Whitford, Martin Sheen (whose President Bartlet was initially scripted as a small role) and Stockard Channing (whose First Lady was initially scripted as a guest role)—meant that Sam Seaborn could no longer be considered the lead character.

While he reluctantly accepted his demotion, Lowe and series creator Aaron Sorkin soon found themselves at odds over the network's meddling with the show, most notably the network demanding changes in the Sam Seaborn character. Eventually, Lowe left the series, not long before Sorkin and director/executive producer Thomas Schlamme unceremoniously quit over a dispute with NBC. During the final season of The West Wing, Lowe returned to his role of Sam Seaborn, appearing in two of the final four episodes. In 2011, Lowe appeared on The Oprah Winfrey Show and stated that he left the show because he did not feel he was being respected, when the other lead characters received a raise and he did not.

Lowe, a little-known actor at the time, and Little House on the Prairie actress Melissa Gilbert briefly met at age 14 in 1978 in the halls of the CBS Television Studios. In 1981, when both were 17, Gilbert spotted Lowe stopped at the red light next to her car and the two began dating. During the filming The Hotel New Hampshire (1984), Lowe began an affair with Nastassja Kinski. According to Gilbert, she caught Lowe in Kinski's hotel room and then slept with Lowe's then-best friend, John Cusack out of revenge. Lowe broke up with Gilbert in 1986 when he began dating Princess Stéphanie of Monaco, but when the relationship with the princess ended, Gilbert and Lowe reunited. The two quickly got engaged and were to be married in the summer of 1987. But when Gilbert informed Lowe that she was pregnant, he broke up with her for good. She miscarried several days later.

In 1988, Lowe was involved in a sex scandal over a videotape of him having sex with two women, one of whom was 16 and the other 22. They were filmed with Lowe during the night before the Democratic National Convention in Atlanta, Georgia. Lowe has asserted that he did not know that the second girl was underage, and it was confirmed that the two had met at a bar. At the time, Lowe was campaigning for Michael Dukakis.

Another part of the same tape was leaked at the time, showing Lowe and his friend Justin Moritt, both having sexual intercourse and oral sex with a young American model named Jennifer, in a hotel room in Paris. This part of the original tape was sold as one of the first commercially available celebrity sex tapes, damaging his public image. Eventually, his career rebounded and Lowe mocked his own behavior during two post-scandal appearances as host of Saturday Night Live.