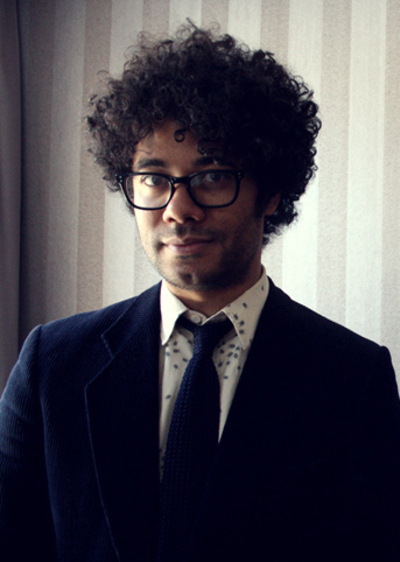 Richard Ellef Ayoade (born 12 June 1977) is an English comedian, actor, writer and director, best known for his roles as Dean Learner in Garth Marenghi's Darkplace and Maurice Moss in The IT Crowd.

Ayoade was born in Whipps Cross, London, the only child of a Norwegian mother, Dagny, and a Nigerian father, Layide Ade Laditi Ayoade. The family moved toIpswich in Suffolk when he was young. Ayoade studied at St. Joseph's College in Ipswich and later studied law at St Catharine's College, Cambridge (1995–1998) where he won the Martin Steele Prize for play production and was president of the Footlights from 1997 to 1998.

While in Footlights, Ayoade acted in and wrote many shows. He and Footlights vice-president John Oliver wrote two pantomimes together: Sleeping Beauty, and Grimm Fairy Tales. Ayoade acted in both Footlights' 1997 and 1998 touring shows: Emotional Baggage and Between a Rock and a Hard Place (directed by Cal McCrystal).