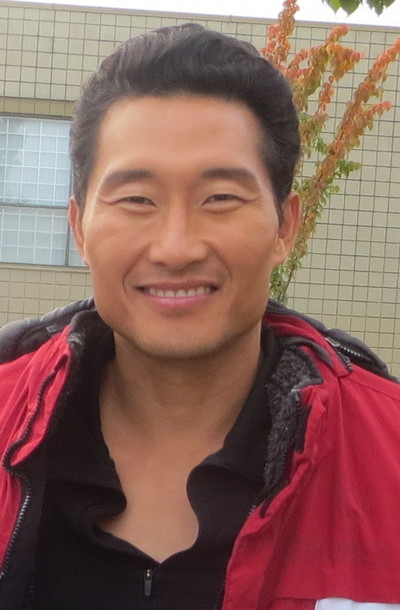 Daniel Dae Hyun Kim (born August 4, 1968) is a Korean-American actor, voice actor, and producer. He is known for his roles as Jin-Soo Kwon in Lost, Chin Ho Kelly in Hawaii Five-0, Gavin Park in Angel and Johnny Gat in the Saints Row series of video games. He also runs a production company called 3AD, which is currently producing the television series The Good Doctor.

Kim was born in Busan, South Korea, the son of mother Jung Kim and father Dr. Doo Tae Kim, and moved to the United States with his family when he was a year old. He grew up in New York City, Easton and Bethlehem, Pennsylvania.

Kim was educated at Freedom High School, a public school in his home city of Bethlehem, Pennsylvania. He graduated from Haverford College in Pennsylvania with a Bachelor's degree in 1990, and earned an MFA from NYU's Graduate Acting Program in 1996.

After graduation, Kim made a name for himself playing numerous roles in a wide variety of television programs. He appeared in CSI: Crime Scene Investigation as a treasury agent as well as episodes of Star Trek: Voyager, Star Trek: Enterprise, Charmed, The Shield, Seinfeld, NYPD Blue and ER. He was a regular on the short-lived Babylon 5 spin-off Crusade and had recurring roles on Angel and 24. He also portrayed Dr. Tsi Chou in a 2008 miniseries based on the acclaimed Michael Crichton novel The Andromeda Strain.

Kim's film credits include a Shaolin monk in American Shaolin, which enabled him to showcase his skills in Tae Kwon Do. Then came a small part in Spider-Man 2 as a scientist working in Doctor Octavius' laboratory, and Crash, the 2005 Best Picture Academy Award winner. He also had minor roles in films such as The Jackal, For Love of the Game, Hulk and The Cave.

From 2004 to 2010, Kim served as a regular cast member on the ABC series Lost in which he played Jin-Soo Kwon, a lowly Korean fisherman-turned-hitman who crashes onto a mysterious island with his wife, Sun-Hwa Kwon (Yunjin Kim). Since the role required him to speak exclusively in Korean, he said he was forced to quickly relearn the language, which he had not spoken with any great frequency since high school. He would go on to play the character up until the 2010 series finale. Throughout the show's run, he, along with his fellow cast members, received numerous accolades, including a 2006 Screen Actors Guild Award for Best Ensemble. He was individually honored with an AZN Asian Excellence Award, a Multicultural Prism Award and a Vanguard Award from the Korean American Coalition, all for Outstanding Performance by an Actor. Kim was also named one of People Magazine's "Sexiest Men Alive" in 2005.

In February 2010, shortly after Lost's conclusion, it was announced that Kim would join the CBS reboot Hawaii Five-0 playing Chin Ho Kelly, the role originally made famous by actor Kam Fong. He was the first actor to be officially cast on the show. That series premiered on September 20, 2010 to strong ratings and solid critical acclaim. He departed the show in late June 2017 prior to the eighth season due to a salary dispute with CBS. He had been seeking pay equality with co-stars Alex O'Loughlin and Scott Caan, but CBS would not agree to it.

Kim co-starred in The Divergent Series: Insurgent, the sequel to 2014's Divergent, playing Jack Kang, the leader of the Candor faction.

In addition to acting, Kim made his directorial debut with the Hawaii Five-0 season five episode, "Kuka'awale." He is an executive producer of ABC's show, "The Good Doctor", and joined the show during its second season in the role of chief of surgery, Dr. Jackson Han.

Kim is the voice of the character Johnny Gat for THQ's Saints Row video game series. He also contributed his vocal likeness for 24: The Game in which he played his character from the show, Tom Baker. He also provides the voice for Rikimaru in the game Tenchu: Wrath of Heaven. He provided the voice for Metron in the final two episodes of Justice League Unlimited.

In a return to his theater roots, Kim played the King of Siam in Rodgers & Hammerstein's The King and I from June 12–28, 2009 at the Royal Albert Hall in London, England.

Kim is currently repped in America by United Talent Agency. He signed with SidusHQ to manage his activities in South Korea.

In January 2016, it was announced Kim would make his Broadway debut as the King of Siam in Rodgers & Hammerstein's The King and I from May 3 - June 26, 2016, at the Lincoln Center Theatre in New York.

As the founder of the film and television production company 3AD, Kim in January 2014 signed a first-look development deal with CBS Television Studios, the first of its kind with an Asian-American actor. 3AD is currently producing the television series The Good Doctor, based on the 2013 South Korean series of the same name.

Though Kim continues to split his time between Los Angeles and New York, he spends the majority of his year in Honolulu, Hawaii, where he lives with his wife and two children. After first moving to Hawaii during the later seasons of Lost, he continued his residency after being cast in Hawaii Five-0. On May 17, 2014, he served as a speaker at the 2014 University of Hawaii commencement ceremony.

Besides acting, Kim has devoted much of his time to various charities. More recently, he served as Cultural Envoy and Member of the U.S. Presidential Delegation for the United States at the World Expo in Korea.