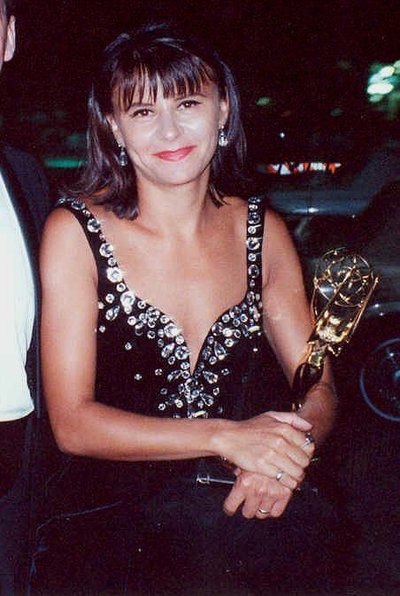 Her early appearances were on English TV sketch comedy shows A Kick Up the Eighties (with Rik Mayall and Miriam Margolyes) and Three of a Kind (with Lenny Henry and David Copperfield). After a brief but high-profile singing career, she appeared as Candice Valentine in Girls On Top with Dawn French and Jennifer Saunders.

She emigrated from the England to the US and created her own network television series, The Tracey Ullman Show, from 1987 until 1990. She later produced programmes for HBO, including Tracey Takes On...(1996–1999), for which she has won numerous awards. She has also appeared in several feature films. Ullman's most recent sketch comedy series, Tracey Ullman's State of the Union, ran from 2008 to 2010 on Showtime.

Ullman was born Trace Ullman in Slough, Buckinghamshire (now in Berkshire), the daughter of Dorin (Cleaver), who was English, and Anthony John Ullman, a Polish Roman Catholic, who worked as a solicitor. Ullman later recalled, "My real name is Trace Ullman, but I added the 'y.' My mother said it was spelled the American way, but I don't think she can spell! I always wanted a middle name. My mum used to tell me it was Mary but I never believed her. I looked on my birth certificate and I didn't have one, just Trace Ullman." Ullman's father was a Polish soldier evacuated from Dunkirk in 1940. He subsequently worked as a furniture salesman and travel agent. When she was six, Ullman's father died of a heart attack while reading her a bedtime story. He was fifty years old. Ullman then went to Hackbridge to live with her mother and older sister. Due to the absence of her father's income, money became tight. Dorin would go on to take a host of odd jobs to make ends meet. "My mother was always doing strange things like driving parts around for a garage, all covered in oil and paid 10 pounds a week. But she was very funny, and our defence against hardship was having a great sense of humour." On a separate occasion, on the subject of her mother's odd jobs, Ullman recalled: "[Mom] worked in a laboratory, testing food, and would bring home samples for our dinner. Sometimes she'd have to report that formula X had been found unfit for human consumption."

In an effort to cheer their mother up, Ullman, along with her older sister Patti, created and performed a nightly variety show on a windowsill in their mother's bedroom. That first show was entitled "The Patti Ullman Show". "I was a spin-off!" recalls Ullman. Ullman would mimic neighbours, family members, friends, and celebrities. She would also perform alone for herself after everyone had gone to bed. "I'd stand in front of the mirror and talk to myself until I fell asleep. I'd interview myself as women with problems. Women in documentaries who had three kids and chain-smoked and husbands in prison that hit them."

Ullman's mother remarried, to a man who Ullman has described as a maniac who drove a London taxi and had a son who stole. He was not a fan of the bedtime variety show. "There was a new person in her bed now and I couldn't do my nightly performance any more. I was nine years old and my show had been cancelled." Alcoholism and domestic abuse became a common occurrence in the household.

At the age of 16, Ullman began finding jobs as a dancer, and soon landed a role in Gigi in Berlin. Upon returning to England, she joined the "Second Generation" dance troupe. She also began appearing in variety shows.

The exposure led to her casting in numerous West End musicals, including Grease, and The Rocky Horror Show. During this time Ullman was cast in a play at London's Royal Court Theatre for an improvised play about club acts. Entering the competition, Ullman created the character Beverly, a born-again Christian chanteuse. The performance was a big hit and she won the "Best Newcomer Award". The BBC became interested and offered her the chance to star in her own show. In 1983, Ullman took part in the workshops for Andrew Lloyd-Webber's upcoming musical, Starlight Express, playing the part of Pearl.

In 1983, Ullman succeeded as a singer on the punk label Stiff Records, although her style was more comic romantic than punk. She had six songs in the UK Top 100 in less than two years. Her 1983 début album, You Broke My Heart in 17 Places, featured her first hit single, "Breakaway" (famous for her performance with a hairbrush as a microphone); the international hit cover version of label-mate Kirsty MacColl's "They Don't Know" went to No.2 in the UK, and No.8 in the US. MacColl sang backing vocals on Ullman's version. It later became the theme song to Tracey Takes On..., one of Ullman's television programmes.

Ullman's songs were over-the-top evocations of 1960s and 1970s pop music with a 1980s edge, "somewhere between Minnie Mouse and the Supremes" as the Melody Maker put it, or "retro before retro was cool," as a reviewer wrote in 2002. Her career received another boost when the video for "They Don't Know" featured a cameo from Paul McCartney; at the time Ullman was filming a minor role in McCartney's film Give My Regards to Broad Street. Ullman released her second album, You Caught Me Out, in 1984. It is the last album she is known to have recorded or released to date.

Along with her television work, Ullman has featured in many films throughout her career. Her first theatrical film was a small role in Paul McCartney's 1984 film Give My Regards to Broad Street. This was followed by a supporting role in the 1985 Meryl Streep drama Plenty, which gained Ullman international acclaim for her comic and dramatic performance.

Before venturing into television comedy, Ullman tried her hand at serious drama, but said that she found that she was not cut out to be a straight actress: "I really thought I was great when I did a quite serious soap opera for the BBC. I played a nice girl from St. John's Wood. 'Mummy, I think I'm pregnant. I don't know who's done it.' Then I would fall down a hill or something. 'EEEEE! Oh, no, lost another baby.' It seemed all I ever did was have miscarriages--or make yogurt."

In 1981, Ullman put together an improvised club act for the Royal Court Theatre's production of Four in a Million, for which she won the London Theatre Critics' award as Most Promising New Actress. This led to her being cast in the sketch comedy programme A Kick Up the Eighties and laterThree of a Kind.

In 1985, she was cast as the promiscuous gold digger Candice Valentine on the ITV sitcom Girls on Top. Ullman was joined by comedians/comedy actresses Jennifer Saunders, Ruby Wax, and Saunders's now-and-then partner Dawn French. The programme had initially been conceived as a vehicle for Ullman. It ran for two series, with Ullman bowing out after the first.

At this point, US television producer James L. Brooks approached her. The two had discussed working together previously, but it was not until 1987 that they created The Tracey Ullman Show. Ullman played a variety of characters, completely unrecognisable with the help of make-up, prosthetics and padding. Paula Abdul served as the show's choreographer. The then-unknown Abdul even used her early music recordings for the series' strenuous dance numbers.

The Tracey Ullman Show earned four Emmys and spawned The Simpsons, which was featured in simple cartoon shorts (created by cartoonist Matt Groening at the behest of Ullman Show producer James L. Brooks). Ullman provided the voice of Emily Winthrop, a British dog trainer on The Simpsons episode "Bart's Dog Gets an F" (1991). In 1992 Ullman filed a lawsuit against Twentieth Century Fox in Los Angeles Superior Court over profits from the later half-hour incarnation of The Simpsons. She wanted a share of The Simpsons' merchandising and gross profits and believed she was entitled to $2.5 million of the estimated $50 million Fox made in 1992. The Fox network had paid her $58,000 in royalties for The Simpsons as well as $3 million for the 3½ seasons her show was on the air. As Ullman had continued her professional relationship with former producer Brooks, only the studio and not Brooks was named in the suit. Brooks was allowed to videotape his testimony as he was in the middle of filming I'll Do Anything, in which Ullman appeared. Eventually the courts ruled in favour of the network.

Along with her television work, Ullman has featured in many films throughout her career. Her first theatrical film was a small role in Paul McCartney's 1984 film Give My Regards to Broad Street. This was followed by a supporting role in the 1985 Meryl Streep drama Plenty.

After the cancellation of The Tracey Ullman Show in 1990, she made her starring début alongside Kevin Kline, River Phoenix and Joan Plowright in I Love You to Death. Ullman has also appeared in lead and supporting roles in Robin Hood: Men in Tights, Nancy Savoca's Household Saints, Bullets over Broadway, Small Time Crooks, A Dirty Shame, and Tim Burton's Corpse Bride. She was nominated as Golden Globe Award for Best Actress – Motion Picture Musical or Comedy for her work in Small Time Crooks in 2001.

Ullman married producer Allan McKeown on 27 December 1983; they have two children, born in 1986 and 1991. On 26 December 2013, it was confirmed that Allan McKeown had died on 24 December 2013 at his home from prostate cancer, just three days short of his thirtieth wedding anniversary to Ullman.

Ullman became an American citizen in December 2006 and now holds dual citizenship of the United States and the United Kingdom. In 2006, Ullman topped the list for the "Wealthiest British Comedians", with an estimated wealth of £75 million.