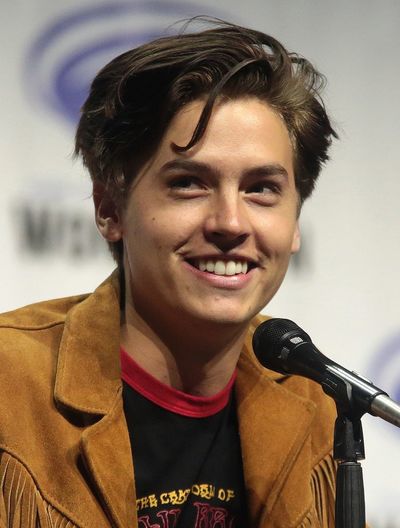 Cole Mitchell Sprouse (born August 4, 1992) is an American actor. He is the twin brother of Dylan Sprouse, and is known for his role as Cody Martin on the Disney Channel series The Suite Life of Zack & Cody and its spinoff The Suite Life on Deck. As of 2017, Sprouse stars as Jughead Jones on The CW television series Riverdale.

Cole Mitchell Sprouse was born in Arezzo, Italy, to American parents Matthew Sprouse and Melanie Wright, while they were teaching at an English language school in Tuscany. Cole was born 15 minutes after his older twin brother Dylan Sprouse. Cole was named after jazz singer and pianist Nat King Cole. Four months after his birth, the family moved back to their parents' native Long Beach, California.

Cole and his brother, Dylan, began acting at the age of eight months following a suggestion from their grandmother, Jonine Booth Wright, who was a drama teacher and actress. Much of Sprouse's early career was shared with his brother—some of their earliest roles were shared roles as one baby or child in commercials, television shows, and films. Due to child labor laws in California restricting the amount of time children can be filmed in a day, casting twins in a single role allows more time for one character to be filmed. Some notable roles he shared with his brother include the characters of Patrick Kelly in the sitcom Grace Under Fire from 1993 to 1998, Julian in the 1999 film, Big Daddy, and young Pistachio Disguisey in 2002's The Master of Disguise. In 2001, Cole began appearing in episodes of NBC's television sitcom Friends, as Ross Geller's son, Ben; this role was his first role in which he did not appear with his brother. As he and his brother grew older, they began taking on more roles as separate characters but often still worked on the same projects. Their first role as separate characters in the same production was as kids in a MADtv sketch. Sprouse portrayed Cody Martin in the 2005 Disney Channel original series, The Suite Life of Zack and Cody alongside his brother; he reprised the role in the show's 2008 spinoff, The Suite Life on Deck and its related film.

On February 9, 2016, Sprouse was cast as Jughead Jones in The CW's teen drama series Riverdale, based on the characters of Archie Comics. The series premiered on January 26, 2017.

Sprouse will star in Five Feet Apart, a romantic drama set to be released in March 2019. He plays a cystic fibrosis patient who falls in love with a girl (played by Haley Lu Richardson) with the same disease.

Sprouse is a fan of comics and worked at the Los Angeles comic store Meltdown.

Sprouse began attending New York University in 2011, after deferring one year. Initially interested in studying film and television production, he decided to enroll instead in the Gallatin School of Individualized Study, pursuing the humanities and in particular archaeology. He graduated alongside his brother in May 2015. Sprouse worked briefly in the field of archaeology, participating in excavations and performing lab work. He specialized in geographical information systems and satellite imaging. During his studies he performed summer digs in both Europe and Asia. Among his undergraduate work, he unearthed a mask of Dionysus on a dig in Bulgaria.

Sprouse has an avid interest in photography. In 2011, he launched a personal photography website and took classes at NYU. He has had shoot assignments for major fashion publications including Teen Vogue, L'Uomo Vogue, The Sunday Times Style, and W Magazine, among others.