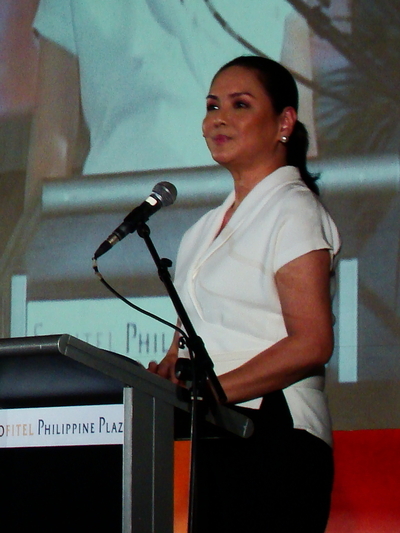 Maria Rosario Santos known as Charo Santos-Concio or Charo Santos (born October 27, 1955) is a Filipina television executive, host, actress, and film producer who hosts the network's longest-running drama anthology Maalaala Mo Kaya. She is the President of ABS-CBN Corporation, and plays a powerful role in TV and film production in the Philippines. On March 3, 2008, Ms. Charo Santos-Concio was promoted as 5th president of ABS-CBN Broadcasting Corporation and in charge of the company's total business portfolio, taking over from interim president Eugenio Lopez III.

Charo is the daughter of Dr. Winifredo Santos and Nora Navarro. She is the second of six children with eldest sister Suzanne, Malou (Head of Star Cinema), only brother Joey, Mae (ABS-CBN Executive Producer), and Millette (wife of comedian/actor/writer/director Edgar Mortiz). She is married to businessman Cesar Rafael Concio, Jr. and has two sons, Francis and Martin. She is now a grandmother to two little girls. She took up an advanced management course at Harvard University. She won also the Miss San Beda and became the muse of the San Beda Red Lions in the NCAA.

Charo Santos was first noticed by the media as Baron Travel Girl in 1976. She also worked as a production assistant with a pre-martial law ABS-CBN.

In the 1980s, Charo produced a number of films such as Oro Plata Mata and Himala under the Experimental Cinema of the Philippines. She also served as the creative force behind the productions of Vanguard Films and Vision Films before moving to Regal Films.

In 1987, while working for Regal Films, she was invited to join the new ABS-CBN, which had re-opened in September 1986. Santos-Concio was promoted from Production Manager, to Program Director to Executive Vice-President. She was credited in the production of several of ABS-CBN’s films including Home Along the Riles, Esperanza and Pangako Sa ‘Yo during this period. Her film background played an important role in the creation of Star Cinema. She is also behind the longest-running Philippine TV drama anthology program Maalaala Mo Kaya, which she has hosted since it premiered in 1991.

On December 26, 2007, the Film Academy of the Philippines (FAP) awarded Charo Santos-Concio with the Manuel de Leon Award for her work in the industry. On March 1, 2008, she was appointed as the 5th President of ABS-CBN, making her the first woman president of the media conglomerate and the Lopez Group of Companies.