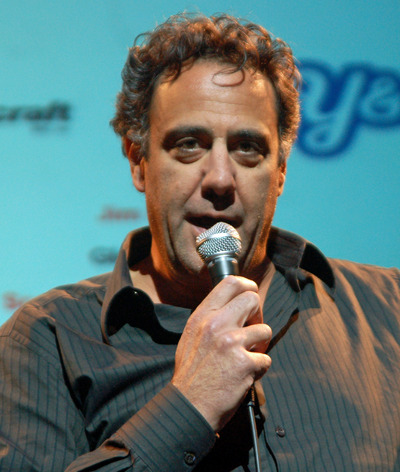 Brad Garrett (born Brad H. Gerstenfeld; April 14, 1960) is an American actor and stand-up comedian. He has appeared in numerous television and film roles.

Garrett was initially successful as a stand-up comedian in the early 1980s. Taking advantage of that success in the late 1980s, Garrett began appearing in television and film, in minor and guest roles. His first major role was Robert Barone on the CBS series Everybody Loves Raymond. The series debuted September 13, 1996 and ran for nine seasons.

Garrett's film roles include Stuart Little 2, Finding Nemo,Garfield, The Amateurs, The Pacifier, Night at the Museum, Tangled, and Hoodwinked Too! Hood vs. Evil. Garrett also played the leading role of Eddie Stark on the Fox television series 'Til Death from 2006 to 2010.

Garrett has won three Primetime Emmy Awards, with three other nominations. Garrett is still prominent within stand-up comedy and is also a professional poker player. Garrett's trademarks are his height and deep, gravelly voice.

In one of his earliest public appearances, Garrett can be seen as the menacing palace guard on the back cover of the Electric Light Orchestra album Discovery released in 1979. In this, Garrett is seen dressed in middle-eastern traditional clothing, akin to that of the fictional character Aladdin, drawing his scimitar.

Garrett started out at various improv clubs in Los Angeles, including The Improv in Hollywood and The Ice House in Pasadena. In 1984, he became the first $100,000 grand champion winner in the comedy category of the TV show Star Search. This led to his first appearance, at age 23, on The Tonight Show Starring Johnny Carson, making him one of the youngest comedians ever to perform on the show. His appearance with Carson brought Garrett a lot of national attention, and soon he was appearing as an opening act for such headliners as Diana Ross and Liza Minnelli. He also opened in Las Vegas for Frank Sinatra, David Copperfield, Smokey Robinson, Sammy Davis, Jr., the Beach Boys, the Righteous Brothers and Julio Iglesias.

In 1998, Garrett proposed to his then-girlfriend, Jill Diven, on the set of Everybody Loves Raymond, and they were married on May 18, 1999. Garrett is Jewish and Diven is Roman Catholic. Their first child Maxwell Bradley Garrett was born on October 14, 1998; their second child, daughter Hope Violet Garrett, was born in January 2000. Garrett and Diven separated in 2005, and Diven filed for divorce in July 2006.