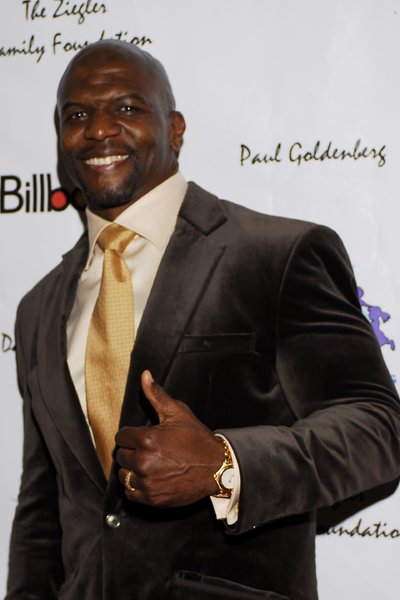 Terry Alan Crews (born July 30, 1968) is an American actor and former NFL player. He is perhaps best known for playing Julius on the UPN/CW sitcom Everybody Hates Chris and for his appearances in Old Spice commercials, as well as for roles in films like Friday After Next, White Chicks, Idiocracy, Gamer, and The Expendables. He stars as Nick Kingston-Persons in the TBS sitcom Are We There Yet? and as himself in the BET reality series The Family Crews.

Crews was born in Flint, Michigan, the son of Terry Crews, Sr. and Patricia Crews. Crews grew up in a rather strict Christian household where which the rearing of the children was mainly held down by his mother. He attended The Flint Academy. He earned an Art Excellence Scholarship to attend the Interlochen Center for the Arts and then Western Michigan University. While completing his studies as an Art major, Crews was a key member of the WMU football team, where he earned all-conference honors as a defensive end. Crews was drafted by the Los Angeles Rams of the NFL in the 11th round of the 1991 NFL Draft. He carved out a career spanning seven years, including stints with the Rams,San Diego Chargers, the Washington Redskins and the Philadelphia Eagles.

After retiring from the NFL in 1997, Crews pursued an acting career and took a stint as T-Money on Battle Dome (modeled after American Gladiators). Crews played the beefcake "he-man" in films such as White Chicks. He played Damon Pearly in Friday After Next, starring Ice Cube and Mike Epps. He has also done commercials with Nike. He last starred in the sitcom Everybody Hates Chris as Julius Rock, and his more modern movie appearances were alongside Adam Sandler in The Longest Yard, Click, and The Benchwarmers (as well as the long-delayed Mike Judge film Idiocracy, where Crews played President Dwayne Elizondo Mountain Dew Herbert Camacho).

Crews usually portrays buff-looking characters with a humorous softer side, singing along with 80's music or becoming engaged with soap operas (as well as his signature robot dance). But more recently, he has been able to alternate with more serious projects such as his recent appearances in Harsh Times, Street Kings, and The Expendables.

Crews has four daughters and one son, one grand child (with one being a stepdaughter from his wife's previous relationship) with his wife of 22 years, Rebecca King-Crews, a former beauty queen and gospel recording artist.