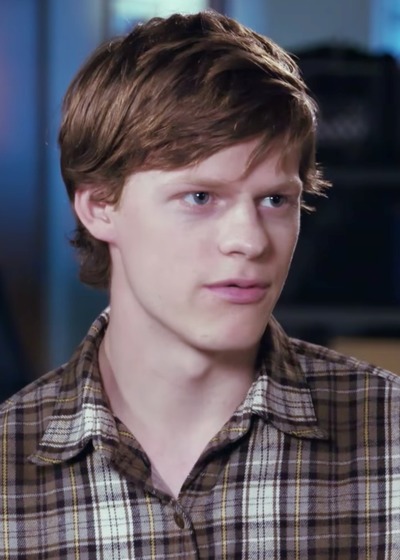 Lucas Hedges (born December 12, 1996) is an American actor. Born to the writer-director Peter Hedges, he studied theater at the University of North Carolina School of the Arts.

Hedges began his acting career by playing supporting roles in Wes Anderson's comedy-drama Moonrise Kingdom (2012) and the crime biopic Kill the Messenger (2014). He made his breakthrough in 2016 by playing a sardonic teenage orphan in Kenneth Lonergan's drama Manchester by the Sea, which earned him a nomination for the Academy Award for Best Supporting Actor. Hedges went on to star as an aggressive youth in an off-Broadway production of Yen, and had supporting roles in the coming-of-age film Lady Bird and the crime film Three Billboards Outside Ebbing, Missouri in 2017.

In 2018, Hedges played the lead roles of a teenager forced into a gay conversion therapy program in Boy Erased and a drug addict in Ben Is Back, both drama films. The latter was written and directed by his father, and the former earned him a nomination for the Golden Globe Award for Best Actor in a Drama. Hedges also made his Broadway debut in a revival of Lonergan's drama The Waverly Gallery.

Hedges was born in Brooklyn Heights, New York, the second child of poet and actress Susan Bruce (née Titman) and screenwriter and director Peter Hedges. He has an older brother, Simon. He grew up in Brooklyn Heights and Cobble Hill, frequently visiting his father's film sets. His paternal grandfather, the Rev. Robert Boyden Hedges, was an Episcopal minister. His maternal grandfather is a former vice president in New York at Home Box Office, and his maternal grandmother, Narcissa Titman, is a former theatre director and lecturer.

A graduate of Saint Ann's School, he studied theatre at the University of North Carolina School of the Arts. Hedges is a graduate of the Cherubs Theatre Program at Northwestern University's National High School Institute. As a child, Hedges made his feature film debut as an extra in his father's directorial Dan in Real Life (2007). His line in the film was cut in post-production.

During a middle-school play production, Hedges was spotted by the casting director for Wes Anderson's Moonrise Kingdom (2012), who eventually cast him in the film as Redford. He went on to play small roles in the comedy-drama Arthur Newman (2012), Jason Reitman's romance Labor Day (2013), and Terry Gilliam's science fiction film The Zero Theorem (2013). In 2014, Hedges had a minor role in Anderson's The Grand Budapest Hotel and played the son of Jeremy Renner's character in Michael Cuesta's drama Kill the Messenger, which was based on CIA involvement in Contra cocaine trafficking. The latter led the critic Todd McCarthy to label him as "very good" and Rodrigo Perez of IndieWire considered him to be the "surprise stand-out of the cast". In 2015, he was cast in the NBC miniseries The Slap, which was adapted from the Australian series of the same name.

Hedges next joined the cast of Kenneth Lonergan's independent drama Manchester by the Sea (2016). In it, he played Patrick Chandler, a 16-year-old boy dealing with the recent death of his father, who is left in the care of his unwilling and troubled uncle (played by Casey Affleck). The film premiered at the Sundance Film Festival. Tim Robey of The Daily Telegraph wrote, "Hedges, phenomenal, fights off every cliché of "troubled" teenagerhood and gives us a gruff, sympathetic boy with a tearaway sex drive". Peter Bradshaw of The Guardian labeled his performance "glorious" and added that he "makes a tremendous troubled 16-year-old". It earned over $78 million against its $9 million budget. For his work, Hedges won a Critics' Choice Movie Award for Best Young Performer, and received a nomination for the Academy Award for Best Supporting Actor, among others.

The following year, Hedges made his stage debut as the lead in the Trip Cullman-directed off-Broadway play Yen, penned by the playwright Anna Jordan. The production ran from February 19 to March 4 at the Lucille Lortel Theatre. Taking note of his performance as an aggressive and violent teenager who shares a troubled relationship with his half-brother, Ben Brantley of The New York Times wrote that he "delivers an expert anatomy of an adolescent on the edge of explosion". Hedges was nominated for the Lucille Lortel Award for Outstanding Lead Actor in a Play and won the Theatre World Award for Outstanding Off-Broadway Debut Performance. Also in 2017, Hedges had supporting roles in two films—Greta Gerwig's directorial debut Lady Bird and Martin McDonagh's crime drama Three Billboards Outside Ebbing, Missouri, both of which were nominated for the Academy Award for Best Picture. The cast of the latter film were awarded with the SAG Award for Outstanding Performance by a Cast.

Hedges had three film releases in 2018. He played the supporting role of a teenager who violently bullies his younger brother (played by Sunny Suljic) in Mid90s, which marked the directorial debut of Jonah Hill. Eric Kohn of IndieWire wrote, "Hedges, quickly becoming the most impressive actor of his generation, buries himself in the gruff, unhappy role of an angst-riddled teen". Hedges played the lead role in two films that year—Boy Erased and Ben Is Back. In the former, based on the eponymous memoir, he played the son of a Baptist pastor who is forced to take part in a gay conversion therapy program. Russell Crowe and Nicole Kidman played his parents. Writing for The Hollywood Reporter, Stephen Farber noted that Hedges "carries the entire show and is alternately frightened, bewildered and defiant. There isn't a false note in his performance." In Ben Is Back, an addiction drama directed by his father and co-starring Julia Roberts, he played the titular character who returns home after spending time in rehab. Pete Hammond of Deadline Hollywood praised both Roberts and Hedges' performances, adding that they "are pitch perfect together, never striking a false note in demonstrating the everlasting bond between a mother and son". For Boy Erased, Hedges received a nomination for the Golden Globe Award for Best Actor in a Drama.

Also in 2018, Hedges made his first appearance on Broadway in a revival of Kenneth Lonergan's play The Waverly Gallery, alongside Elaine May and Michael Cera. He played the role of a teenager coping with his grandmother's Alzheimer's disease. Chris Jones of the Chicago Tribune credited him for effectively conveying the "frustration family members feel when one of their own starts to decline".

Hedges will appear in two upcoming films of 2019. He will star in Honey Boy, a drama penned by and co-starring Shia LaBeouf, and in Trey Edward Shults's musical drama Waves.

When asked about his sexuality in 2018, Hedges said: "In the early stages of my life, some of the people I was most infatuated with were my closest male friends. That was the case through high school, and I think I was always aware of that, while for the most part I was attracted to women", also adding that he exists "on that spectrum: Not totally straight, but also not gay and not necessarily bisexual" He later spoke about being an ally to the LGBTQ community and said that he considered his sexuality to be a "fluid experience".