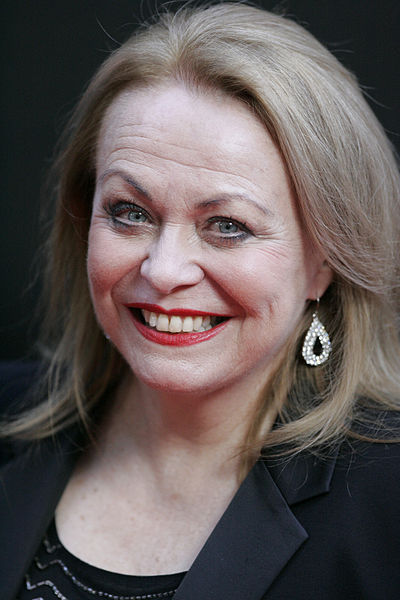 Jacqueline Ruth "Jacki" Weaver, AO (born 25 May 1947) is an Australian theatre, film, and television actress. She is known internationally for her performances as Janine "Smurf" Cody in Animal Kingdom (2010) and as Dolores Solatano in Silver Linings Playbook (2012), both of which earned her a nomination for an Academy Award for Best Supporting Actress.

Weaver was born in Sydney, New South Wales, Australia. Her mother, Edith (née Simpson), was a migrant from northern England, and her father, Arthur Weaver, was a Sydney solicitor. She attended Hornsby Girls' High School, and won a scholarship to study Sociology at university, but instead embarked upon an acting career.

Weaver has been working in Australian film, stage and television since the 1960s. The turning point in her career came in 1965 just before she was about to go to university and was cast in the Australian TV series Wandjina!

In 1964 at the Palace Theatre in Sydney, Weaver and a number of other Australian singers such as The Delltones and her then-boyfriend Bryan Davies performed a satire on the Gidget movies, in which Weaver performed as "Gadget."

In the mid-1960s, she appeared on the Australian music show Bandstand. In one appearance, she sang a 1920s-style pastiche, the novelty song "I Love Onions."

Weaver's film debut came with 1971's Stork for which she won her first Australian Film Institute Award. In the 1970s, Weaver gained a sex-symbol reputation thanks to her performances in the likes of Alvin Purple (1973). Other notable films during this time include a small role in Peter Weir's critically acclaimed film version of Picnic at Hanging Rock (1975), and a more substantive appearance in Caddie (1976) for which she won her second Australian Film Institute Award.

In the 1990s and early 2000s, Weaver found it increasingly hard to find roles on screen or television and devoted much of her energy to the Australian stage, starring in plays including A Streetcar Named Desire, Last of the Red Hot Lovers, Death of a Salesman, Reg Cribb's Last Cab to Darwin, and Chekhov's Uncle Vanya alongside Cate Blanchett and Richard Roxburgh in 2010-11.

In 2010, Weaver also starred in the Melbourne-set crime thriller Animal Kingdom playing a gang family matriarch. Her performance was praised and earned her an Academy Award nomination as well as winning the Australian Film Institute Award, the National Board of Review, Los Angeles Film Critics Association Award and a Satellite Award.

Weaver made her Hollywood debut with the comedy The Five-Year Engagement, alongside Emily Blunt and Jason Segel, and starred in Park Chan-Wook's English-language debut, Stoker, alongside fellow Australian actors Nicole Kidman and Mia Wasikowska, and British actor Matthew Goode.

On 10 January 2013, Weaver was again nominated for an Academy Award for her role opposite Robert De Niro in the film Silver Linings Playbook. In April the same year, she was cast in the adaptation of Richard Alfieri's play 6 Dance Lessons in 6 Weeks opposite Gena Rowlands.

Weaver was married to David Price from 1966 to 1970 before divorcing and remarrying Max Hensser in 1975. She married radio and television presenter Derryn Hinch in 1983. They divorced in 1996, remarried in 1997, and divorced again in 1998. She had a son, Dylan (b. 1969) with partner at the time John Walters. She is currently married to actor Sean Taylor.