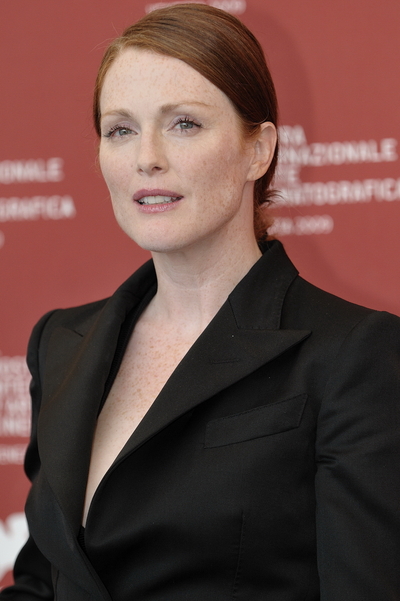 Julianne Moore (born Julie Anne Smith; December 3, 1960) is an American actress and children's author. Prolific in cinema since the early 1990s, Moore is particularly known for her portrayals of emotionally troubled women. Her career has involved both art house and Hollywood films, and she has received four Academy Award nominations.

After studying theatre at Boston University, Moore began her career with a series of television roles. From 1985 to 1988, she was a regular in the soap opera As the World Turns, earning a Daytime Emmy for her performance. Her film debut was in 1990, and she continued to play supporting roles throughout the early 1990s. Moore made her breakthrough with Robert Altman's Short Cuts (1993), followed by critically acclaimed performances in Vanya on 42nd Street (1994), and Safe (1995). Starring roles in the blockbusters Nine Months (1995) and The Lost World: Jurassic Park (1997) established her as a leading Hollywood actress.

Moore received considerable recognition in the late 1990s and early 2000s, earning Oscar nominations for Boogie Nights (1997), The End of the Affair (1999), Far from Heaven (2002), and The Hours (2002). Other notable film appearances include The Big Lebowski (1998), Magnolia (1999), Hannibal (2001), and Children of Men (2006). She has continued to work regularly in the 2010s, receiving praise for her performances in The Kids Are All Right (2010); the television film Game Change (2012), in which she portrayed Sarah Palin and received the Emmy Award, Golden Globe Award, and Screen Actors Guild Award for Best Actress; and Maps to the Stars (2014) for which she won the Best Actress award at the Cannes Film Festival. In addition to acting, Moore has written a successful series of children's books. She is married to the director Bart Freundlich, with whom she has two children.

Moore was born Julie Anne Smith on December 3, 1960, at the Fort Bragg army base in North Carolina. Her father, Peter Moore Smith, was a paratrooper in the American army, and later a colonel and military judge. Her mother, Anne McNeal McLean (Love) Smith, was a psychologist and social worker who emigrated from Greenock, Scotland to the United States as a child. Moore has a younger sister, Valerie, and a younger brother, novelist Peter Moore Smith. She considers herself half Scottish, and applied for British citizenship in 2011 to honor her deceased mother.

Moore frequently moved around the country as a child, due to her father's profession. She was close to her family as a result, but has said she never had the feeling of coming from one particular place. The family lived in multiple locations, including Alabama, Georgia, Texas, Panama, Nebraska, Alaska, New York, and Virginia, and Moore attended nine different schools. The frequent relocating made her an insecure child, and she struggled to establish friendships. Despite these difficulties, Moore later remarked that an itinerant lifestyle was beneficial to her future career: "When you move around a lot, you learn that behavior is mutable. I would change, depending on where I was ... It teaches you to watch, to reinvent, that character can change."

Moore "became serious with drama" when she attended J. E. B. Stuart High School in Fairfax County, Virginia. One of her classmates was Bruce Cohen. When Moore was 16, the family moved to Frankfurt, Germany, where she attended Frankfurt American High School. She was clever and studious, a self-proclaimed "good girl", and she planned to become a doctor. She had never considered performing, or even attended the theatre, but she was an avid reader and it was this hobby that led her to begin acting at the school. She appeared in several plays, including Tartuffe and Medea, and with the encouragement of her English teacher she chose to pursue a theatrical career. Moore's parents supported her decision, but asked that she train at university to provide the added security of a college degree. She was accepted to Boston University and graduated with a BFA in Theatre in 1983.

Moore moved to New York City after graduating, and worked as a waitress. Her acting career began with off-Broadway theatre and television. Her first screen role came in 1984, in an episode of the soap opera The Edge of Night. Her break came the following year, when she joined the cast of As the World Turns. Playing the dual roles of half-sisters Frannie and Sabrina Hughes, the intensive work provided an important learning experience for Moore, who looks back on the job fondly: "I gained confidence and learned to take responsibility", she has said. Moore appeared on the show until 1988, when she won a Daytime Emmy Award for Outstanding Ingenue in a Drama Series. Before leaving As the World Turns, she had a role in the 1987 CBS miniseries I'll Take Manhattan. Once she had finished on the soap opera, she turned to the stage to play Ophelia in a Guthrie Theater production of Hamlet. The actress sporadically returned to television over the next three years, appearing in the TV movies Money, Power, Murder (1989), The Last to Go (1991), and Cast a Deadly Spell (1991).

The filmmaker Robert Altman saw Moore in Uncle Vanya, and was sufficiently impressed to cast her in his next project: the ensemble drama Short Cuts (1993). Moore was pleased to work with him, as it was Altman who had given her an appreciation for cinema when she saw his 1977 film 3 Women in college. Playing artist Marian Wyman was an experience she found difficult, as she was a "total unknown" surrounded by established actors, but it proved to be Moore's breakout role. Variety magazine described her as "arresting", and noted that her monologue, delivered naked from the waist down, would "no doubt be the most discussed scene" of the film. Short Cuts was critically acclaimed, and received awards for Best Ensemble Cast at the Venice Film Festival and the Golden Globe Awards. Moore received an individual nomination for Best Supporting Female at the Independent Spirit Awards, while the monologue earned her a degree of notoriety.

Short Cuts was one of a trio of successive film appearances that boosted Moore's reputation. It was followed in 1994 with Vanya on 42nd Street, a filmed version of her ongoing Vanya production, directed by Louis Malle. Moore's performance of Yelena was described as "simply outstanding" by Time Out, and she won the Boston Society of Film Critics award for Best Actress. Moore was then given her first leading role, playing an unhappy suburban housewife who develops multiple chemical sensitivity in Todd Haynes' low-budget film Safe (1995). She had to lose a substantial amount of weight for the role, which made her ill and she vowed never to change her body for a film again. In their review, Empire magazine writes that Safe "first established [Moore's] credentials as perhaps the finest actress of her generation". The film historian David Thomson later described it as "one of the most arresting, original and accomplished films of the 1990s", and the performance earned Moore an Independent Spirit Award nomination for Best Actress. Reflecting on these three roles, Moore has said, "They all came out at once, and I suddenly had this profile. It was amazing."

Actor and stage director John Gould Rubin was Moore's first husband, whom she met in 1984 and married two years later. They separated in 1993, and their divorce was finalized in August 1995. "I got married too early and I really didn't want to be there", she has since explained. Moore began a relationship with Bart Freundlich, her director on The Myth of Fingerprints, in 1996. The couple have a son, Caleb (born December 1997) and a daughter, Liv (born April 2002). They wed in August 2003 and live in the Greenwich Village neighborhood of New York's Manhattan borough. Moore has commented, "We have a very solid family life, and it is the most satisfying thing I have ever done." She tries to keep her family close when working and picks material that is practical for her as a parent. 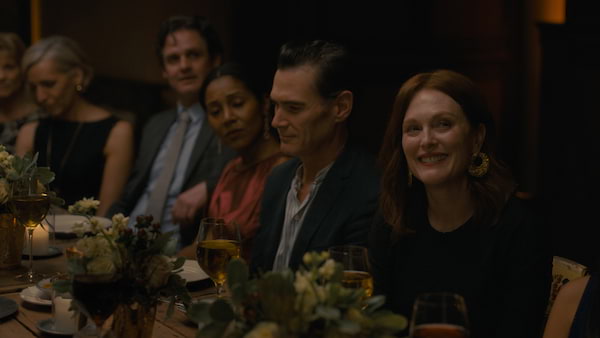 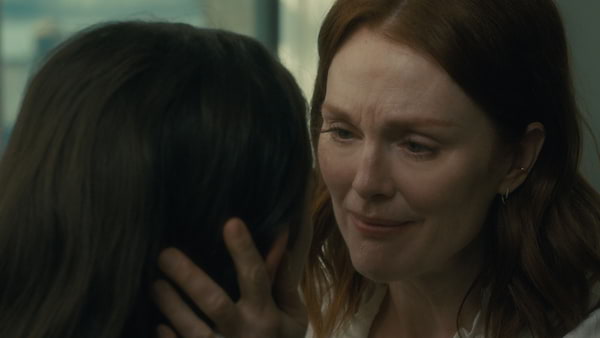 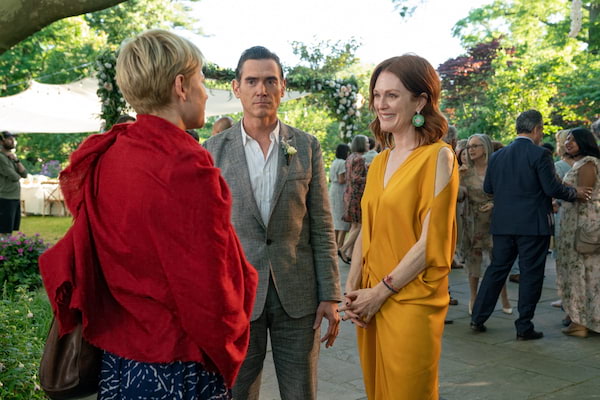 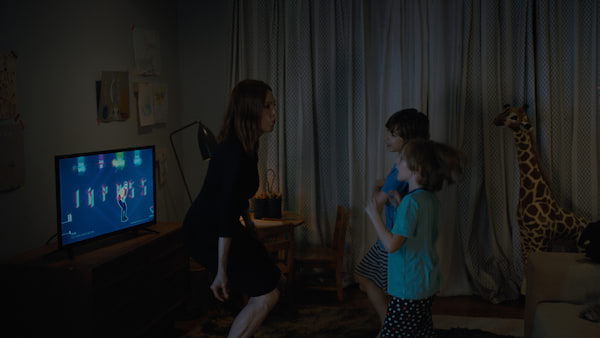 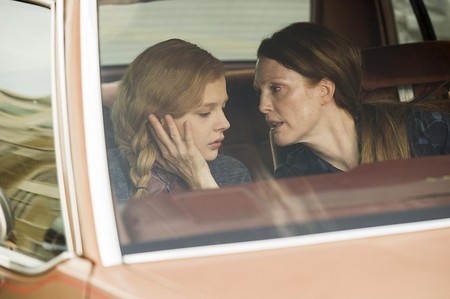 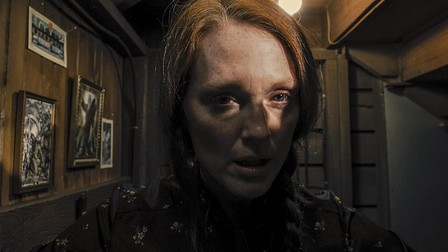 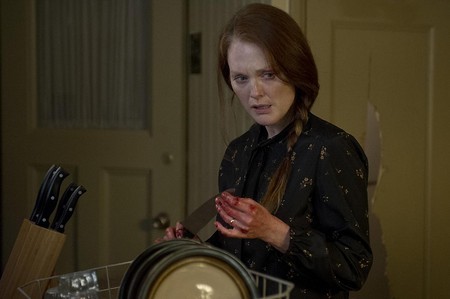 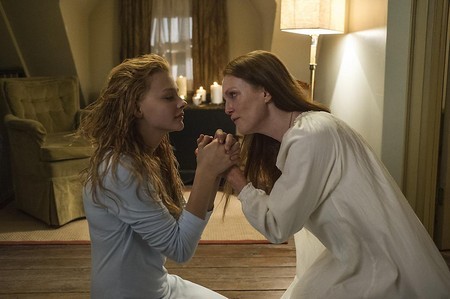 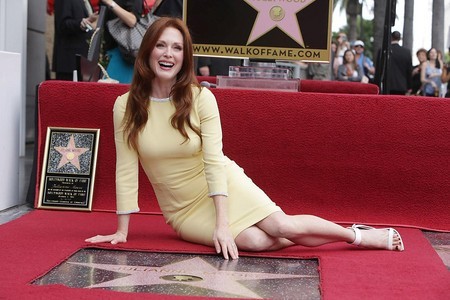 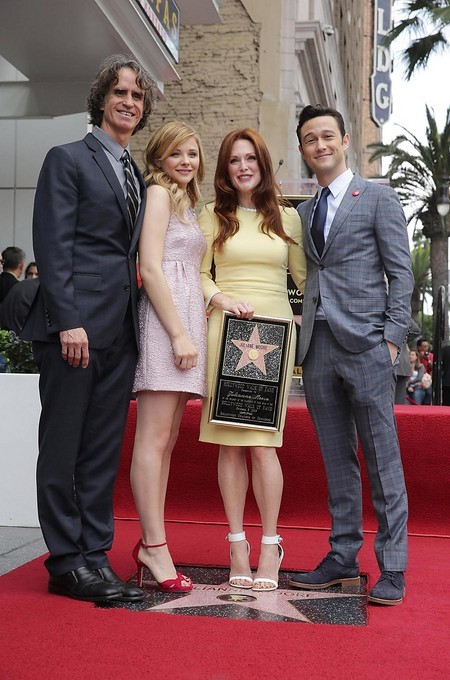 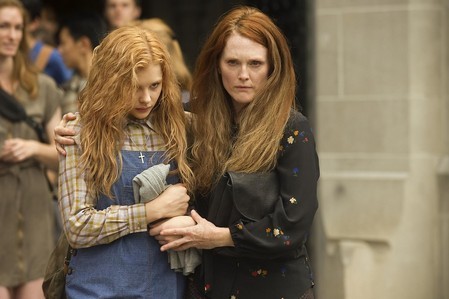 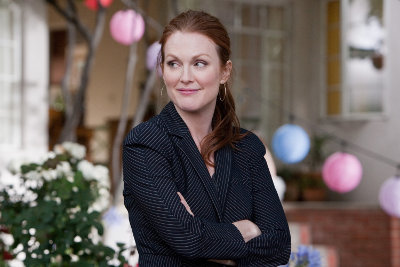 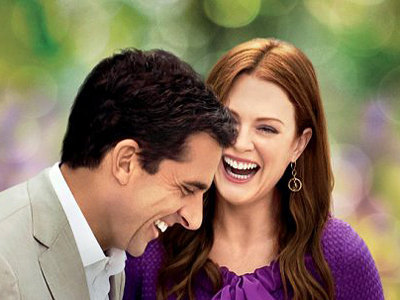