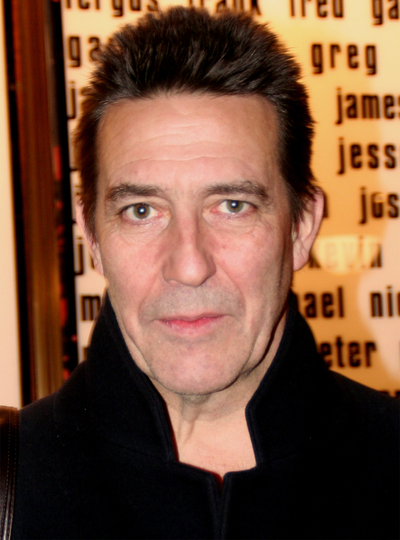 Ciarán Hinds (born 9 February 1953) is a Northern Irish film, television and stage actor. He has built a reputation as a versatile character actor appearing in such high-profile films as Road to Perdition, The Phantom of the Opera, Munich, There Will Be Blood, Harry Potter and the Deathly Hallows – Part 2, The Woman in Black, Tinker Tailor Soldier Spy, Ghost Rider: Spirit of Vengeance and Frozen. His television roles include Gaius Julius Caesar in the series Rome, DCI James Langton in Above Suspicion, Bud Hammond in Political Animals and Mance Rayder in the Emmy Award-winning Game of Thrones. As a stage actor, Hinds has enjoyed spells with the Royal Shakespeare Company, the Royal National Theatre in London and six seasons with Glasgow Citizens' Theatre. Adding to his New York Broadway theatre performances, Hinds starred in a production of Tennessee Williams' Cat on a Hot Tin Roof as Big Daddy in early 2013.

Hinds was born in Belfast, Northern Ireland. Brought up as a Catholic in North Belfast, he was one of five children and the only son of his doctor father and schoolteacher mother. His mother, Moya, was also an amateur actress. He was an Irish dancer in his youth and was educated at Holy Family Primary School and St. Malachy's College. After leaving St. Malachy's, he enrolled as a law student at Queen's University, Belfast (QUB), but was soon persuaded to pursue acting and abandoned his studies at Queen's to enroll at the Royal Academy of Dramatic Art (RADA).

Hinds began his professional acting career at the Glasgow Citizens' Theatre in a 1976 production of Cinderella. He remained a frequent performer at the Citizens' Theatre during the late 1970s and through the mid-1980s. During this same period, Hinds also performed on stage in Ireland with the Abbey Theatre, the Field Day Theatre Company, the Druid Theatre, the Lyric Players' Theatre and at the Project Arts Centre. In 1987, he was cast by Peter Brook in The Mahabharata, a six-hour theatre piece that toured the world, and he also featured in its 1989 film version. Hinds almost missed the casting call in Paris due to difficulties renewing his Irish passport. In the early 1990s, he was a member of the Royal Shakespeare Company.

He appeared in the title role of the RSC's 1993 production of Richard III, directed by Sam Mendes; Mendes turned to Hinds as a last minute replacement for an injured Simon Russell Beale. Hinds gained his most popular recognition as a stage actor for his performance as Larry in the London and Broadway productions of Patrick Marber's Tony Award-nominated play Closer. In 1999, Hinds was awarded both the Theatre World Award for Best Debut in New York and the Outer Critics Circle Award for Special Achievement (Best Ensemble Cast Performance) for his work in Closer. He was on stage in 2001 in The Yalta Game by Brian Friel at Dublin's Gate Theatre. He appeared on Broadway in The Seafarer by Conor McPherson, which ran at the Booth Theatre from December 2007 through March 2008. In February 2009 Hinds took the leading role of General Sergei Kotov in Burnt by the Sun by Peter Flannery at London's National Theatre. Hinds returned to the stage later in 2009 with a role in Conor McPherson's play The Birds, which opened at Dublin's Gate Theatre in September 2009.

Hinds made his feature film debut in John Boorman's Excalibur (1981). He played Captain Frederick Wentworth in Jane Austen's Persuasion (1995), Jonathan Reiss in Lara Croft Tomb Raider: The Cradle of Life (2003), John Traynor in Veronica Guerin (2003), and Firmin in the film version of Andrew Lloyd Webber's The Phantom of the Opera (2004). Hinds also played Carl, a cover-up professional assisting a group of assassins, in Steven Spielberg's political thriller, Munich (2005). In 2006, he appeared in Michael Mann's film adaptation of the 80's television show, Miami Vice, and as Herod the Great in The Nativity Story. In the 2006 film Amazing Grace, Hinds portrayed Sir Banastre Tarleton, one of the chief opponents of abolition of the slave trade in parliament. He starred in Margot at the Wedding, alongside Nicole Kidman, Jack Black and Jennifer Jason Leigh, in a drama-comedy about family secrets and relationships. He also appeared in There Will Be Blood (2007) directed by Paul Thomas Anderson.

On television, Hinds portrayed Gaius Julius Caesar in the first season of BBC/HBO's series, Rome (2006). He has also been featured in a number of made-for-television films, including the role of Michael Henchard in Thomas Hardy's The Mayor of Casterbridge (2004), for which he received the Irish Film and Television Award for Best Actor in a Dramatic Series. Additional television performances include Edward Parker-Jones in the crime drama series Prime Suspect 3 (1993), Abel Mason in Dame Catherine Cookson's The Man Who Cried (1993), Jim Browner in The Memoirs of Sherlock Holmes episode The Cardboard Box (1994), Fyodor Glazunov in the science fiction miniseries Cold Lazarus (1996), Edward Rochester in Charlotte Brontë's Jane Eyre (1997), the Knight Templar Brian de Bois-Guilbert in Sir Walter Scott's Ivanhoe (1997) and a portrayal of the French existentialist Albert Camus in Broken Morning (2003).

Hinds lives in Paris with his long-time partner, Hélène Patarot; they met in 1987 while in the cast of Peter Brook's production of The Mahabharata. They have a daughter, Aoife, born in 1991.

Hinds is a close friend of Liam Neeson and served as a pallbearer at the funeral of Neeson's wife, actress Natasha Richardson, in upstate New York on 22 March 2009.