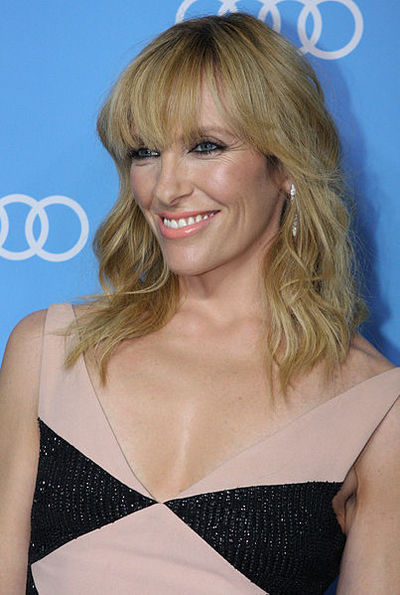 Antonia "Toni" Collette (born 1 November 1972) is an Australian actress and musician, known for her acting work on stage, television and film as well as a secondary career as the lead singer of the band Toni Collette & the Finish. She is a recipient of the Emmy and Golden Globe Award for Best Actress, and has been nominated for the Academy Award and the Tony Award.

Collette's acting career began in the early 1990s with comedic roles in films such as Spotswood aka The Efficiency Expert (1992) and Muriel's Wedding (1994), for which she was nominated for a Golden Globe Award for Best Actress. She achieved international recognition as a result of her Academy Award-nominated portrayal of Lynn Sear in The Sixth Sense (1999) and a year later made her Tony Award-nominated Broadway debut with the leading role in the musical The Wild Party. In the 2000s, she was noted for her roles in independent features including About a Boy (2002), for which she won several critics' awards and was nominated for a BAFTA Award, and Little Miss Sunshine (2006), which earned her a Screen Actors Guild Award as well as her second Golden Globe and BAFT  nominations.

From 2009-2011, she played the lead role in the television series United States of Tara, for which she won the Primetime Emmy Award and the Golden Globe Award for Best Actress in a Comedy Series. Most recently, Collette headlined the US miniseries Hostages and returned to Broadway in Will Eno's The Realistic Joneses, for which she earned a Drama Desk Special Award.

Collette was born in Blacktown, a suburb in Western Sydney, the daughter of Judy, a customer-service representative, and Bob Collette, a truck driver. She has two younger brothers, Ben and Christopher. From an early age, Collette showed a talent for acting. She faked appendicitis when she was 11, and was so convincing that doctors removed her appendix, although tests showed nothing wrong with it.

She attended Blacktown Girls' High School until the age of 16, and later attended both the Australian Theatre for Young People and National Institute of Dramatic Art. Her first acting role was onstage in the musical Godspell in Sydney in her early teens.

Collette made her television debut in 1990, in a guest appearance on the Seven Network drama series A Country Practice. Collette has won five Australian Film Institute awards, including the Australian Best Actress in a Lead Role for Muriel's Wedding in 1994, a role for which she gained 18 kg (40 lb) in seven weeks. In 1992, she was part of the ensemble comedy-drama Spotswood aka The Efficiency Expert, which starred Anthony Hopkins and which also featured Russell Crowe. In 1996, she was part of the ensemble cast of the comedy, Cosi.

She has also received broad acclaim on Broadway, starring as Queenie in Michael John LaChiusa's musical work, The Wild Party. For this role, Collette was nominated for the Tony Award for Best Leading Actress in a Musical.

Collette turned down the title role in Bridget Jones's Diary because she was committed to perform on Broadway at the time. In 1999, she was nominated for an Academy Award for her role as the mother of a troubled boy in the U.S. film The Sixth Sense, which also starred Bruce Willis and Haley Joel Osment.