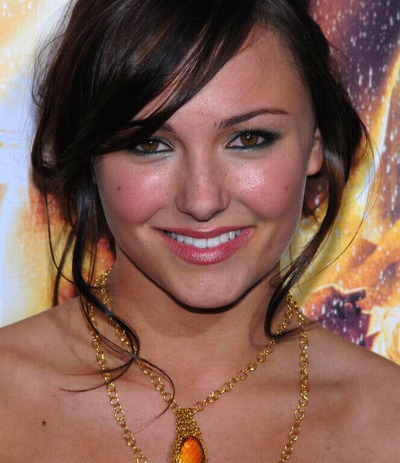 Briana Barbara-Jane Evigan (born October 23, 1986) is an American actress and dancer. She is perhaps best known for her roles as Andie West in Step Up 2: The Streets and Cassidy Tappan in Sorority Row. She started dancing at the age of 9 and is still dancing as part of her career today. Evigan has been noted as a Scream Queen for starring in many horror, and thriller films such as Sorority Row, Burning Bright, Mother's Day, The Devil's Carnival, Stash House, and Mine Games.

Evigan was born in Los Angeles, California, the daughter of Pamela C. Serpe, a dancer, model, and actress, and actor Greg Evigan. Her father is of Polish ancestry, and her mother of Italian ancestry. She is the youngest of three siblings, with brother Jason and sister Vanessa Lee. She has studied dance since she was nine. She is one of the singers and plays keyboards in the group Moorish Idol. She also undertook a speech and communication degree at Los Angeles Valley College. She currently lives in Los Angeles, California.

A professional dancer, Evigan has appeared in music videos for Linkin Park, Flo Rida, T-Pain and Enrique Iglesias. She has also had small roles in television series and films such as Bottom's Up,Something Sweet and Fear Itself.

In 2008, she won the breakout role of Andie West in the sequel to the 2006 dance drama Step Up,Step Up 2: The Streets. Filming took place in late 2007 in Baltimore and was released February 14, 2008. The film, which met with negative reviews with Rotten Tomatoes (receiving 24%), achieved box office success earning a worldwide gross of $148,424,320. Both Evigan and co-star Robert Hoffman earned the Best Kiss Award at the 2008 MTV Movie Awards.

In 2009, S. Darko, a sequel to the 2001 cult-hit horror Donnie Darko, was released. Evigan played Samantha Darko's best friend, Corey. The film stars James Lafferty and Ed Westwick. A theatrical release was scrapped and was released Straight-to-DVD on May 12, 2009. Unlike Donnie Darko, the film received negative reviews.