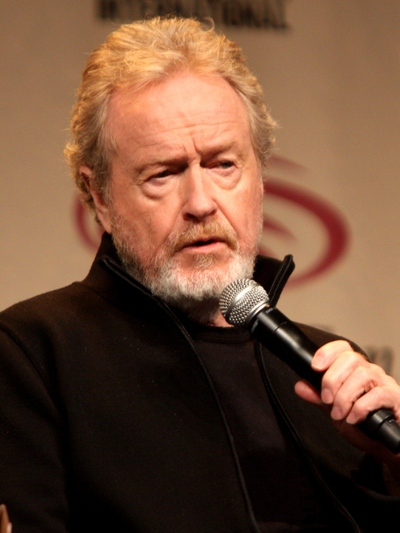 Scott is known for his atmospheric, highly concentrated visual style, which has influenced many directors. Though his films range widely in setting and period, they frequently showcase memorable imagery of urban environments, whether 2nd century Rome (Gladiator), 12th century Jerusalem (Kingdom of Heaven), contemporary Osaka (Black Rain) or Mogadishu (Black Hawk Down), or the future cityscapes of Blade Runner. Scott has been nominated for three Academy Awards for Directing (for Thelma and Louise, Gladiator and Black Hawk Down), plus two Golden Globe and two BAFTA Awards. In 2003, Scott was knighted by Queen Elizabeth II at Buckingham Palace for his "services to the British film industry". He is also the elder brother of the late Tony Scott.

Scott was born on November 30, 1937 in the North East Tyneside coastal town of South Shields, England, the son of Elizabeth and Colonel Francis Percy Scott. He was raised in an Army family, so for most of his early life, his father — an officer in the Royal Engineers — was absent. His elder brother, Frank, joined the Merchant Navy when he was still young and the pair had little contact. During this time the family moved around, living in (among other areas) Cumbria, Wales and Germany. He had a younger brother, Tony, who also became a film director. After the Second World War, the Scott family moved back to their native North East England, eventually settling in Teesside (whose industrial landscape would later inspire similar scenes in Blade Runner), where he studied at Grangefield Grammar School and West Hartlepool College of Art from 1954 to 1958, obtaining a Diploma in Design.

Scott went on to study at the Royal College of Art, contributing to college magazine ARK and helping to establish the college film department. For his final show, he made a black and white short film, Boy and Bicycle, starring both his younger brother and his father (the film was later released on the 'Extras' section of The Duellists DVD). In February 1963 Scott was named in title credits as "Designer" for the BBC television programme Tonight, about the severe winter of 1963. After graduation in 1963, he secured a job as a trainee set designer with the BBC, leading to work on the popular television police series Z-Cars and science fiction series Out of the Unknown. He was originally assigned to design the second Doctor Who serial, The Daleks, which would have entailed realising the famous alien creatures. However, shortly before Scott was due to start work, a schedule conflict meant he was replaced on the serial by Raymond Cusick. In 1965, he began directing episodes of television series for the BBC, only one of which, an episode of Adam Adamant Lives!, is available commercially. (He directed two others, but these have been wiped.)

In 1968, Ridley and Tony Scott founded Ridley Scott Associates (RSA), a film and commercial production company. Working alongside Alan Parker, Hugh Hudson, and cinematographer Hugh Johnson Ridley Scott made many commercials at RSA during the 1970s, including a notable 1974 Hovis advert, "Bike Round" (featuring the New World Symphony), filmed in Shaftesbury, Dorset.

Five members of the Scott family are directors, and all have worked for RSA. His brother Tony was a successful film director whose career spanned more than two decades; his sons Jake and Luke are both acclaimed directors of commercials, as is his daughter, Jordan Scott. Jake and Jordan both work from Los Angeles; Luke is based in London. In 1995, Shepperton Studios was purchased by a consortium headed by Ridley and Tony Scott, which extensively renovated the studios while also expanding and improving its grounds.

The Duellists (1977) marked Ridley Scott's first feature as director. Shot in Europe, it was nominated for the main prize at the Cannes Film Festival, and won an award for best film.The Duellists had limited commercial impact internationally. Set during the Napoleonic Wars, it follows two French Hussar officers, D'Hubert and Feraud (Keith Carradine and Harvey Keitel) whose quarrel over an initially minor incident turns into a bitter extended feud spanning fifteen years, interwoven with the larger conflict that provides its backdrop. The film has been acclaimed for providing a historically authentic portrayal of Napoleonic uniforms and military conduct.

In 1984 Scott directed a big-budget (US $900,000) television commercial to launch the Apple Macintosh computer. The so-called 1984 advertisement was given a showcase airing in the United States on 22 January 1984, during Super Bowl XVIII, alongside screenings in movie theatres. Some consider this advertisement a "watershed event" in advertising and a "masterpiece". The advertisement used its heroine (portrayed by Anya Major) to represent the coming of the Macintosh (indicated by her white tank top adorned with a picture of Apple’s Macintosh computer) as a means of saving humanity from "conformity" (Big Brother).

Ridley Scott was married to Felicity Heywood from 1964 to 1975. The couple had two sons, Jake and Luke, both of whom work as directors on Scott's production company Ridley Scott Associates. Scott later married advertising executive Sandy Watson in 1979, with whom he had a daughter, Jordan Scott, and divorced in 1989. His current partner is the actress Giannina Facio, whom he has cast in all his movies since White Squall except American Gangster." He divides his time between homes in London, France, and Los Angeles.

Scott received a knighthood in honor of his substantial contribution to the British film industry, from Queen Elizabeth II at Buckingham Palace on 8 July 2003. Scott admitted feeling "stunned and truly humbled" after the ceremony, saying, "As a boy growing up in South Shields, I could never have imagined that I would receive such a special recognition. I am truly humbled to receive this treasured award and believe it also further recognises the excellence of the British film industry."