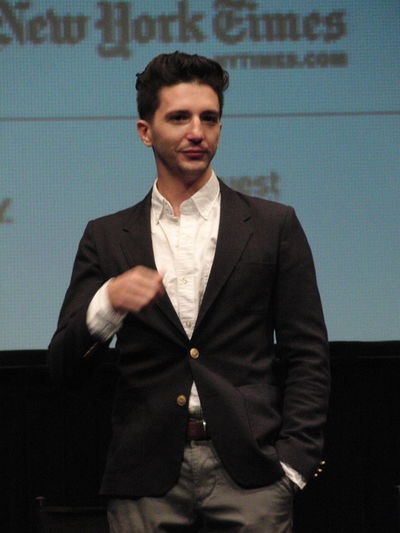 John Robert Magaro (born February 16, 1983) is an American actor. He starred alongside James Gandolfini in Not Fade Away (2012)—the feature film debut of David Chase, creator of The Sopranos. He also starred alongside Rooney Mara in Carol (2015). He made his Broadway debut as Earl Williams, the escaped convict, in the hit revival of The Front Page in 2016.

Magaro was born in Akron, Ohio, the son of Wendy and James Magaro, and grew up in its nearby suburb of Munroe Falls. His father is of Italian descent and his mother is Jewish; he was raised in his mother's religion. His parents were teachers. While attending school within the Stow-Munroe Falls City School District, he began acting in local theater, including shows at the Cleveland Play House and the Kent State Porthouse Theatre at Blossom Music Center, and Weathervane Playhouse in Akron, Ohio. As a youth, Magaro also appeared in television commercials, and had a role in a Rescue 911 episode.

After graduating from Stow-Munroe Falls High School in 2001, he went on to study theater at Point Park University in Pittsburgh. Currently, Magaro lives in and works out of New York. Among his acting highlights are The Big Short and Todd Haynes' acclaimed film Carol alongside Rooney Mara and Cate Blanchett. His early film work included The Brave One alongside Jodie Foster and Terrence Howard; the HBO film Taking Chance starring Kevin Bacon; and a lead role in fellow Northeast Ohio native Wes Craven's horror film, My Soul to Take. He also appeared in 8 episodes of Orange Is the New Black.

Not Fade Away (2012) took place in 1960s New Jersey and centered on Magaro's character, the lead singer of a teenage rock and roll band called "The Twylight Zones" — a reference to Rod Serling's popular anthology series, The Twilight Zone. The film's title referred to "Not Fade Away", a Buddy Holly song later covered by The Rolling Stones. The film itself reunited The Sopranos' creator David Chase with stars James Gandolfini (as Magaro's father) and Steven Van Zandt (as music supervisor).