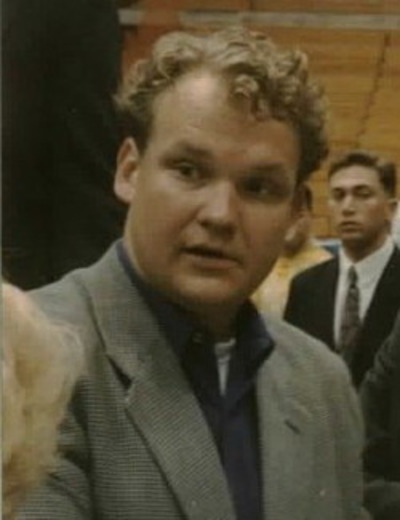 Paul Andrew "Andy" Richter (born October 28, 1966) is an American actor, writer, comedian, and late night talk show announcer. He is best known for his role as the sidekick of Conan O'Brien on each of the host's programs:Late Night and The Tonight Show on NBC, and Conan onTBS. He is also known for his voice work in the Madagascar films and for starring in the sitcoms Quintuplets, Andy Richter Controls the Universe, and Andy Barker, P.I..

Richter, the third of four children, was born in Grand Rapids, Michigan. His mother, Glenda Swanson (née Palmer), was a kitchen cabinet designer, and his father, Laurence R. Richter, taught Russian at Indiana University for more than 32 years. Richter was raised in Yorkville, Illinois. His parents divorced when he was 4 and his father later came out as gay. He is of Swedish and German descent. In high school, he was elected Prom King.

In the late 1980s, Richter attended Columbia College Chicago as a film major. While at Columbia he learned the basics of comedic acting and writing by starring in numerous student films and videos. After leaving Columbia in 1988 Richter worked as a production assistant on commercial shoots in Chicago. In 1989, he began taking classes at Chicago's Improv Olympic. He went from student to "House Performer" within a year. Richter branched out working with "The Comedy Underground" and the Annoyance Theater.

In the early 1990s the Annoyance Theater hit gold when producer Jill Soloway staged The Real Live Brady Bunch with live, word-for-word performances of the '70s sitcom. The show was so popular that it attracted national attention and moved to New York City. Richter was not an original member of the cast but the actor who played "Mike Brady" in the Chicago cast opted not to go to New York. Richter asked Soloway if he could play "Mike" in New York and since Soloway had not cast a replacement, she agreed.

At the same time The Real Live Brady Bunch was playing in New York, two fellow Annoyance members (Beth Cahill and Melanie Hutsell, who played Marcia and Jan Brady in the "Real Live Brady Bunch" stage show) were hired as cast members on Saturday Night Live. With friends on SNL, Andy was able to get into the after-show parties where he met SNL writer Robert Smigel. Two years later, Smigel hired Richter for a new show he was producing, Late Night with Conan O'Brien. Originally hired as a writer, Richter was upgraded to Conan O'Brien's sidekick just weeks before the show began airing in 1993, after it became clear the two had a strong rapport, something Smigel noticed after sending Richter to join O'Brien on stage during a practice run-through when the production staff was testing lighting angles and sound.

Richter is married to comedic actress and writer/author Sarah Thyre, and they have two children, William and Mercy. Thyre was part of the cast of the cult comedy series Strangers with Candy, on which Richter made frequent cameo appearances. Richter and Thyre also appeared together playing Hansel and Gretel in an episode of the Upright Citizens Brigade sketch comedy series on Comedy Central in 1998.