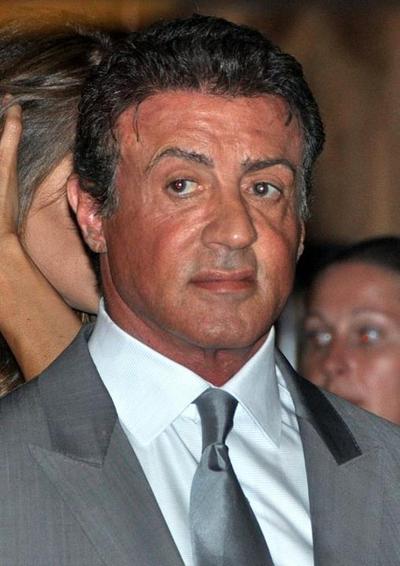 Sylvester Gardenzio Stallone (born July 6, 1946), nicknamed Sly Stallone, is an American actor, screenwriter and film director. Stallone is well known for his Hollywood action roles, particularly boxer Rocky Balboa, the title character of the Rocky series' seven films from 1976 to 2015, soldier John Rambo from the four Rambo films, which ran from 1982 to 2008, and Barney Ross in the three The Expendables films from 2010 to 2014. He wrote or co-wrote most of the 14 films in the three franchises, and directed many of the films.

Stallone's film Rocky was inducted into the National Film Registry as well as having its film props placed in the Smithsonian Museum. Stallone's use of the front entrance to the Philadelphia Museum of Art in the Rocky series led the area to be nicknamed the Rocky Steps. Philadelphia has a statue of his Rocky character placed permanently near the museum. It was announced on December 7, 2010 that Stallone was voted into boxing's Hall of Fame.

In 1977, Stallone was nominated for two Academy Awards for Rocky, Best Original Screenplay and Best Actor. He became the third man in history to receive these two nominations for the same film, after Charles Chaplin and Orson Welles. He received critical raves, and several awards, for reprising the role of Rocky Balboa in Ryan Coogler's Creed.

Sylvester Stallone was born Sylvester Gardenzio Stallone in New York City, the elder son of Frank Stallone, Sr. (1919–2011), a hairdresser and beautician, and Jacqueline "Jackie" Stallone (née Labofish), an astrologer, former dancer, and promoter of women's wrestling. Stallone's father was born in Gioia del Colle, Apulia, Italy, and immigrated to the United States in the 1930s. Stallone's mother is of half French (from Brittany) and half Ukrainian (from Odessa) descent. His younger brother is actor and musician Frank Stallone.

Complications his mother suffered during labor forced her obstetricians to use two pairs of forceps during his birth; misuse of these accidentally severed a nerve and caused paralysis in parts of Stallone's face. As a result, the lower left side of his face is paralyzed – including parts of his lip, tongue, and chin – an accident which has given Stallone his snarling look and slightly slurred speech. Stallone was baptized Catholic. Around the age of 4, Stallone was flat-footed and put in a tap dancing school by his mother. His father moved the family to Washington, D.C. in the early 1950s, where he opened a beauty school. His mother opened a women's gymnasium called Barbella's in 1954. Stallone's parents divorced when Sylvester was nine, and he eventually lived with his mother. When Stallone was 16, he scored poorly in school and his mother got him a summer job at her beauty salon. He attended Notre Dame Academy and Lincoln High School in Philadelphia, and Charlotte Hall Military Academy, prior to attending Miami Dade College and the University of Miami.

The Party at Kitty and Stud's and Score

Stallone had his first starring role in the soft core pornography feature film The Party at Kitty and Stud's (1970). He was paid US$200 for two days' work. Stallone later explained that he had done the film out of desperation after being evicted from his apartment and finding himself homeless for several days. He has also said that he slept three weeks in the Port Authority Bus Terminal in New York City prior to seeing a casting notice for the film. In the actor's words, "it was either do that movie or rob someone, because I was at the end – the very end – of my rope". The film was released several years later as Italian Stallion, in order to cash in on Stallone's newfound fame (the new title was taken from Stallone's nickname since Rocky and a line from the film).

In 1970, Stallone appeared in the film No Place to Hide, which was re-cut and retitled Rebel, the second version featuring Stallone as its star. After the style of Woody Allen's What's Up, Tiger Lily?, this film, in 1990, was re-edited from outtakes from the original movie and newly shot matching footage, then redubbed into an award-winning parody of itself titled A Man Called... Rainbo.

Stallone's other first few film roles were minor, and included brief uncredited appearances in Woody Allen's Bananas (1971) as a subway thug, in the psychological thriller Klute (1971) as an extra dancing in a club, and in the Jack Lemmon film The Prisoner of Second Avenue (1975) as a youth. In the Lemmon film, Jack Lemmon's character chases, tackles and mugs Stallone, thinking that Stallone's character is a pickpocket. He had his second starring role in The Lords of Flatbush, in 1974. In 1975, he played supporting roles in Farewell, My Lovely; Capone; and Death Race 2000. He made guest appearances on the TV series Police Story and Kojak.

Stallone gained worldwide fame with his starring role in the smash hit Rocky (1976). On March 24, 1975, Stallone saw the Muhammad Ali–Chuck Wepner fight. That night Stallone went home, and after three days, 20 straight hours he had written the script, but Stallone subsequently denied that Wepner provided any inspiration for it. Other possible inspirations for the film may have included Rocky Graziano's autobiography Somebody Up There Likes Me, and the movie of the same name. Wepner filed a lawsuit which was eventually settled with Stallone for an undisclosed amount. Stallone then attempted to sell the script to multiple studios, with the intention of playing the lead role himself. Irwin Winkler and Robert Chartoff became interested and offered Stallone US$350,000 for the rights, but had their own ideas for the lead role, including Robert Redford and Burt Reynolds. Stallone refused to sell unless he played the lead character and eventually, after a substantial budget cut to compromise, it was agreed he could be the star.

Rocky was nominated for ten Academy Awards, including Best Actor and Best Original Screenplay nominations for Stallone. The film went on to win the Academy Awards for Best Picture, Best Directing and Best Film Editing.

Stallone has been married three times. At age 28, on December 28, 1974, he married Sasha Czack from Pennsylvania. The couple had two sons, Sage Moonblood (May 5, 1976 – July 13, 2012), who died of heart disease at age 36, and Seargeoh (b. 1979). His younger son was diagnosed with autism at an early age. The couple divorced on February 14, 1985. He married model and actress Brigitte Nielsen, on December 15, 1985, in Beverly Hills, California. Stallone and Nielsen's marriage, which lasted two years, and their subsequent divorce, were highly publicized by the tabloid press. In May 1997, Stallone married Jennifer Flavin, with whom he has three daughters: Sophia, Sistene, and Scarlet.

After Stallone's request that his acting and life experiences be accepted in exchange for his remaining needed college credits to graduate, he was granted a Bachelor of Fine Arts (BFA) degree by the president of the University of Miami, in 1999. In 2006, Stallone partnered with a beverage company producing an upscale bottled water brand called Sly Water.