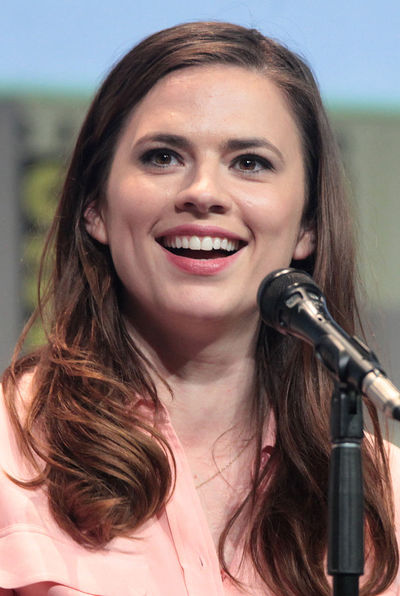 Hayley Elizabeth Atwell (born 5 April 1982) is a British and American actress. She is known for her work in stage productions such as A View from the Bridge, and onscreen, for period pieces as the 2008 drama The Duchess, the 2010 historical drama miniseries The Pillars of the Earth and for her portrayal of Peggy Carter in various films and television series set in the Marvel Cinematic Universe, including the lead role in the ABC action-adventure series Agent Carter.

Hayley Elizabeth Atwell was born on 5 April 1982 in London, an only child. Her father, Grant, is a part-Native American from Kansas City, Missouri photographer-turned-shaman, who also goes by his Native American name, Star Touches Earth. Her mother Alison is British. Atwell has dual citizenship of the United Kingdom and the United States.

By the time Atwell was two years old, Grant and Alison had separated. Grant returned to the United States, and Atwell and her mother lived in a bohemian enclave in the Ladbroke Grove area of west London, where Atwell was raised. While she visited her father in the United States every summer, she grew close to her mother, and has described their relationship as more akin to friends in the vein of "Ab Fab" than that of mother and daughter.

After attending Sion-Manning Roman Catholic Girls' School in London, she took A-levels at the London Oratory School. She was offered entry to Oxford University to read theology and philosophy, but she failed to acquire the requisite A-level grades. She would later reflect on this, saying, "I think I kind of sabotaged it to be honest. I remember after it all happened and it was clear I wasn't going to go to Oxford I felt liberated."

Atwell took two years off to travel with her father and work for a casting director. She then enrolled at the Guildhall School of Music and Drama, where she trained for three years. Her contemporaries at Guildhall included actress Jodie Whittaker, whom Atwell would later describe as a "great friend", and Michelle Dockery, with whom she would later work in Restless. She also met television writer Gabriel Bisset-Smith, with whom she would later enter into a long-term relationship. Atwell graduated in 2005.

A year before she began her studies at Guildhall School, Atwell's first on-screen role was in a television commercial for Pringles potato crisps, the proceeds from which Atwell used to pay her first first-year tuition. Within eight months of graduating from Guildhall, Atwell won her first feature film role, in Woody Allen's 2007 film Cassandra's Dream, playing stage actress Angela Stark.

In 2008, she appeared in the film The Duchess as Bess Foster and the Miramax film Brideshead Revisited as Lady Julia Flyte. After being cast, Miramax suggested she lose weight for the part. Atwell, who has been described as "tall, with the kind of natural bum and boobs that women undergo surgery to obtain", considered the advice, commenting later in a 2015 interview, "I thought, 'OK, I suppose I should.'" Atwell subsequently reconsidered after her co-star Emma Thompson, advised her, "You're not a model. You're an actor." Atwell later reflected, "In the end, they accepted me for who I was. If I've ever had an insecurity about myself in this industry, Emma always has an amazing ability to say something to put it all into perspective, so that you don’t hate yourself."

In January 2009, Atwell made her West End début in Lindsay Posner's revival of A View from the Bridge at the Duke of York's Theatre which earned her a Laurence Olivier Award nomination. Atwell appeared as "415" in AMC Television's November 2009 miniseries, The Prisoner, a remake of the 1967–68 series by the same name. In 2010, she starred as Freya Deverell in the Channel 4 adaptation of William Boyd's novel Any Human Heart.

Atwell played Agent Peggy Carter in the 2011 American superhero film Captain America: The First Avenger. MTV Networks' NextMovie.com named her one of the "Breakout Stars to Watch for in 2011". Atwell voiced Carter in the 2011 video game Captain America: Super Soldier. She reprised the role in the 2013 short film Agent Carter, the 2014 film Captain America: The Winter Soldier, and in the 2015 films Avengers: Age of Ultron and Ant-Man. As Carter, she appeared in two episodes of the ABC television show Agents of S.H.I.E.L.D., and as the lead role in Marvel's Agent Carter, which aired from 2015 to 2016. Agent Carter was cancelled by ABC on 12 May 2016. She also provided Carter's voice in Lego Marvel's Avengers and Avengers: Secret Wars. In 2015, Atwell played Cinderella's mother in Disney's live action adaptation of Cinderella directed by Kenneth Branagh.

In February 2016, Atwell was cast to star in the pilot for the ABC, Conviction. On 8 November 2016, ABC announced Conviction would not receive a back-order for more episodes, effectively cancelling the show, and later officially cancelled it in 11 May 2017. On 2 August 2017, it was announced she will star as Evelyn in Disney's live action Winnie the Pooh film Christopher Robin directed by Marc Forster, co-starring with Ewan McGregor.

In a 2015 interview, Atwell discussed how her role as Peggy Carter influenced a then-recent tweet she made to her 319,000 Twitter followers about having her image digitally altered on the cover of a German magazine. When one visitor to her page asked her, "Why are you so beautiful?", she retorted, "Why I am so Photoshopped?" In the interview, Atwell stated, "It's important that young girls understand what Photoshop is. I do feel a certain amount of responsibility now that I'm playing Peggy."

Seven years after meeting television writer Gabriel Bisset-Smith at Guildhall School of Music and Drama, Atwell began a long-term relationship with him. In a December 2012 interview, by which time the relationship had ended, Atwell expressed regret about being as open as she was in interviews about the relationship, saying, "We were friends for seven years before we started a relationship and now we're friends again. I didn't plan that at all – I'm not some amazing ex-girlfriend at all"

As of 2010 Atwell lived in a flat in the Primrose Hill area of London. In 2015, she moved to Los Angeles to be close to the production of Agent Carter.

During the filming of Captain America: The First Avenger in 2010, Atwell took a three-month course in art history and haiku at the Open University.