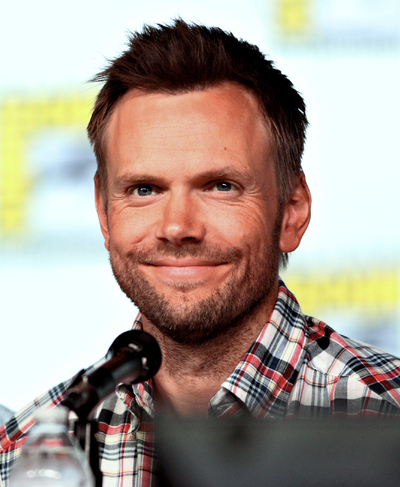 Joel Edward McHale (born November 20, 1971) is an American comedian, actor, writer, television producer, television personality, and voice artist. He is best known for hosting The Soup and for his role as Jeff Winger on the NBC comedy series Community.

McHale's role as a voice actor includes Elliot in Open Season 2, filling in for Ashton Kutcher. He also appeared in Spider-Man 2 in a brief appearance as bank manager Mr. Jacks, CSI: Miami as Greg Welsh, and Spy Kids: All the Time in the World as Wilbur Wilson.

McHale, the middle of three brothers, was born on November 20, 1971, in Rome, Italy, where his father worked as Dean of Students at Loyola University Rome Center. His mother, Laurie, is from Vancouver, British Columbia, and his father, Jack, is from Chicago. He has Irish, and Norwegian ancestry. McHale was raised Catholic in the Seattle area, graduating from Mercer Island High School in 1991. He also participated at Youth Theatre Northwest.

McHale was part of the Almost Live! cast, a local sketch-comedy TV show produced by Seattle's KING-TV (Channel 5). From 1993 until 1997, McHale was a member of the improv comedy group at Unexpected Productions, participating in Theatersports! at the Market Theater located in Pike Place Market in downtown Seattle.

After earning his master's degree in acting, McHale moved to Los Angeles and landed small roles in Oliver Beene, CSI: Miami, and Will & Grace. He played a TV reporter in the biopic Lords of Dogtown. He guest-starred as a cast member on the NBC improv comedy show Thank God You're Here during the pilot episode and had a guest role on an episode of Pushing Daisies. McHale also appeared in Spider-Man 2 in a small role as Mr. Jacks, a bank manager.