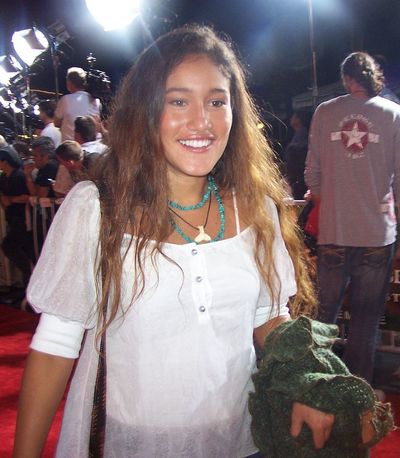 Q'orianka Waira Qoiana Kilcher (born February 11, 1990) is an American actress, singer, and activist. She performed as Pocahontas in the 2005 film The New World, and Kaʻiulani in Princess Kaiulani.

Her father is of Quechua-Huachipaeri descent from Peru. Her mother, Saskia Kilcher, is a human rights activist of Swiss-German descent, born in Alaska and raised in Switzerland. Q'orianka has two brothers, Kainoa Kilcher and Xihuaru Kilcher, who both work as actors and stunt performers. Kilcher's maternal grandfather was Ray 'Pirate' Genet, an Alaskan-born mountaineer, her first-cousin once removed is Grammy-nominated singer Jewel Kilcher, and the founding patriarch of their family in Alaska, Senator Yule Kilcher, was a state legislator and delegate to the Alaskan constitutional conference who was originally from Switzerland.

When Kilcher was two years old, she and her mother moved to Kapaa, Hawaii, where her brother Kainoa was born. Her father, from whom she is estranged, was absent for much of her life. Growing up in Hawaii, Kilcher was inspired by the local culture and started hula dancing at the age of five years. She also trained in Tahitian dance and West African, as well as ballet, Hip Hop and Modern Dance. In 1997 Kilcher won Ballet Hawaii's Young Choreographer Award at the age of seven years.

She was selected to compete at the international Tahitian Dance Competition in San Jose, California in 1996 and 1997. She performed in over fifty professional dance performances island wide. As member of the Waikiki Singers, she was chosen to be the Soprano Soloist, performing Schubert's Mass in G and Amahl and the Night Visitors by Gian Carlo Menotti. At the age of six years, Kilcher was the first child to study classical voice at the University of Hawaii with Laurance Paxton. She also studied Drama with Bill Ogilvie at the Diamond Head Theater. At six years, her mother booked her at venues as featured singer and opening act to some of Hawaii's greats, such as Willie K. (Kahaiali'i) among others.

In 1999, her mother moved the family to California. Kilcher started to showcase her talent busking on the Third Street Promenade in Santa Monica.

At the age of nine, Kilcher was cast as Choire Who in Ron Howard's How the Grinch Stole Christmas. She was 12 when she received a full scholarship to the Hollywood Musician Institute, where she studied vocal performance, music theory and song-writing. She is an accomplished Blackbelt in Wushu, Kung Fu and a Stunt performer and has trained at the National Wushu Training Center and Impact Stunts.

At 14, Q'orianka emerged into the front ranks of young actors with her portrayal of Pocahontas opposite Colin Farrell and Christian Bale in director Terrence Malick Academy Award-nominated motion picture, The New World (2005). Her performance was critically acclaimed and won her the National Board of Review's best breakthrough performance of 2006, the 2006 Alma Award for best Latin American actress in a feature film, numerous other award nominations. The film was released in December 2005 to mixed reviews. The film was a critical success, receiving several positive reviews and award nominations, but it was shown in only 811 theatres worldwide. It yielded a relatively low box office gross.

In the summer of 2006, Kilcher began filming the independent film The Power of Few, which she produced through her own production company, Entertainment On-Q. She played the title role in the feature film Princess Kaiulani. The film, about the United States' overthrow of the Hawaiian monarchy, was released in May 2010 to negative reviews. However, Kilcher received positive feedback for her role, with Roger Ebert writing that "she evokes great depth and sympathy in her role and seems to have created Kaiulani from the inside out."

In 2009, Kilcher performed in The People Speak, a documentary feature film that uses dramatic and musical performances of the letters, diaries, and speeches of common people in the U.S., based on historian Howard Zinn's "A People's History of the United States".

In 2011, Kilcher played Tiger Lily in Neverland, a version of the Peter Pan story that aired on the Syfy Channel.