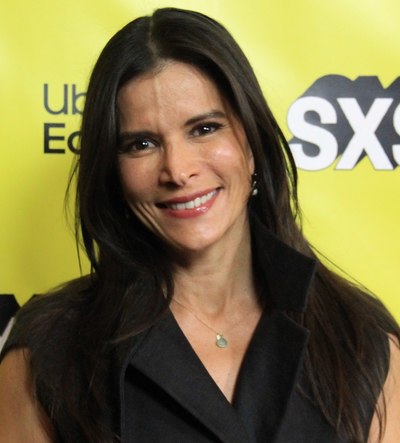 Velásquez was born in Barquisimeto, Venezuela, the fifth of six children. Her father is mestizo and her mother a member of the indigenous Wayuu people. Her parents were both teachers; her father also worked for UNESCO and was assigned to other countries. Velásquez grew up with her family in Mexico and France. She attended San Vicente de Paul High School, graduating in 1987.

In 1989, she participated in the Miss Venezuela 1989 contest. She represented Peninsula de la Goajira, a center of the Wayuu people, and placed as 2nd runner-up. After three years of engineering studies at college, Velásquez left for Milan, Italy, in pursuit of a modelling career. She is fluent in English, Spanish, French, and Italian.

From 1995 to 2000 she studied acting in Los Angeles and New York. She paced down runways in ready-to-wear fashion shows for designers such as Chanel, Chloe, John Galliano, Antonio Berardi, Bella Freud, Corinne Cobson, Claude Montana, Dolce & Gabbana and many others. As for print advertising, Velásquez appeared in ads for Chanel's Allure, Cover Girl, Monsoon, Roberto Verino's Verino fragrance, as well as Victoria's Secret.

During her modeling career, she appeared in the covers of Vogue, Bazaar, and Marie Claire among others and several issues of the annual Sports Illustrated Swimsuit Issue. This led to a large number of further modeling engagements. She was ranked as No. 45 on the Maxim Hot 100 Women of 2001 and No. 16 in Stuff magazine's "102 Sexiest Women in the World" poll in 2002.

Velásquez played Anck-Su-Namun in the 1999 film The Mummy and its 2001 sequel The Mummy Returns.

She had a special appearance on "Breaking the Girl" video of the alternative rock band Red Hot Chili Peppers. She also appeared on the Rod Stewart video "Leave Virginia Alone" and others, such as Ricardo Montaner "Para Llorar" and George Michael's.

Velásquez was appointed UNESCO Artist for Peace (Good will Ambassador) in June 2003, in the context of the International Decade for the World’s Indigenous People. She was honored in recognition of her actions for protection of the Wayúu Taya indigenous people in Latin America and for safeguarding their cultural heritage.

Velásquez played the character of Begoña on several episodes of The L Word during its 5th season (2008). She had a recurring role on the television series Arrested Development playing Marta Estrella. On CSI: Miami, in the episode "From The Grave", she appeared as a guest star, playing Celia Gonzalez. She had a recurring role in the first season of Rescue Me playing Nez, the ex-girlfriend and mother of Franco's daughter, Keela. She most recently guest starred on Ugly Betty.

She received the “Women Together” award at the United Nations on 2009. The Awards Ceremony recognizes the valuable contribution of men, women, and institutions dedicated to the creation of a more equal society

Velásquez competed on behalf of the charity Wayúu Tayá Foundation on the twelfth season of The Apprentice. She was fired in week 6, on 25 March 2012.

On August 30, 2018 the Organization of American States (OAS) appointed Velásquez as Goodwill Ambassador for the Rights of Indigenous Peoples of the Americas during a ceremony at its headquarters in Washington, DC.

Velasquez was honored by The Human Rights Campaign with the 2018 Visibility Award in New England.

In 2019, she plays Patricia Alvarez in the horror film The Curse of La Llorona.

In 2002, Velásquez founded The Wayuu Taya Foundation, a non-profit organization dedicated to assisting the Wayuu, an indigenous people located in northwestern Venezuelan and northern Colombia. In 2010, after the devastating Haiti earthquake, she had the Wayuú Tayá Foundation commission a special symbol of hope to raise money for the victims of the Haiti earthquake. It was sold with the slogan: Keep the "H" Close to Your Heart—Help Haiti Hope.

In February 2015, Velásquez released her memoir Straight Walk, recalling her journey from poverty to international acclaim.

She and her ex-girlfriend Lauren had a daughter. They separated after eight years together.