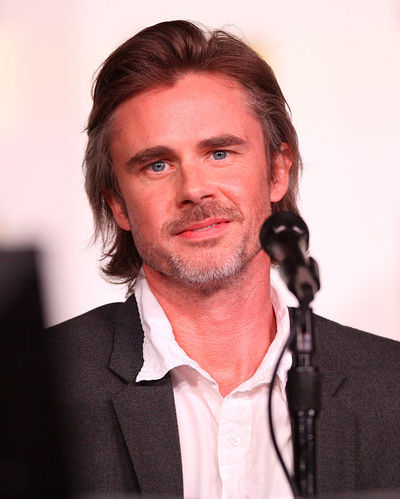 Sam Trammell (born January 29, 1969) is an American actor. He is known for his role as Sam Merlotte on the HBO vampire series True Blood, which saw him nominated for a 2010 Scream Award for Best Supporting Actor.

Trammell was born in New Orleans, Louisiana. He graduated from George Washington High School in Charleston, West Virginia. He furthered his studies at Brown University and the University of Paris. He and girlfriend, Missy Yager, have twin boys, Winston and Gus, who were born on August 9, 2011.

Trammell has worked in theater, Broadway, Off-Broadway, film, and television. He is an accomplished New York stage actor whose credits include a Tony nominated performance in Ah, Wilderness! at Lincoln Center. Off-Broadway, he starred in Dealer's Choice, My Night with Reg, If Memory Serves, and Ancestral Voices, as well as in Kit Marlowe at the Joseph Papp Public Theater, where he received outstanding reviews.

Trammell's big break came when he landed the role of Sam Merlotte on the HBO series True Blood. In 2013, Trammell was cast to play the father, Mr. Lancaster, in the upcoming film The Fault in Our Stars, based on the book by John Green, starring Shailene Woodley.