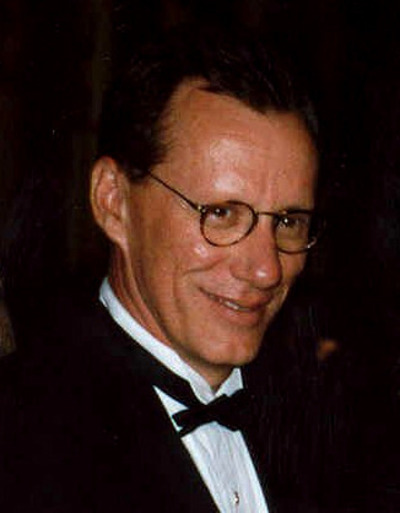 James Howard Woods (born April 18, 1947) is an American actor, producer and voice artist. After his first Golden Globe nomination for a breakthrough role in The Onion Field (1979), Woods starred in Once Upon a Time in America, the Oliver Stone films Salvador and Nixon, Ghosts of Mississippi, and in the legal series Shark. He has won three Emmy Awards – for television movies Promise and My Name Is Bill W., and for the animated series Hercules. He has been nominated twice for an Academy Award. His voice work has been heard in the animated series The Simpsons, Family Guy, Grand Theft Auto: San Andreas, and in films Stuart Little 2 (as Falcon) and Disney's Hercules (as Hades).

oods was born in Vernal, Utah. His father, Gail Peyton Woods, was an army intelligence officer who died in 1960 after routine surgery. His mother, Martha A. (née Smith), operated a pre-school after her husband's death and later married Thomas E. Dixon. Woods grew up in Warwick, Rhode Island, where he attended Pilgrim High School. He is of part Irish descent and was raised Catholic, briefly serving as an altar boy.

Woods ultimately chose to pursue his undergraduate studies atMassachusetts Institute of Technology, where he majored in political science (though he originally planned on a career as an eye surgeon). While at MIT, Woods pledged to Theta Delta Chi Fraternity. He was also an active member of the student theatre group "Dramashop" where he both acted in and directed a number of plays. In order to pursue a career in acting, he dropped out of MIT in 1969 before his graduation. Woods has said that he became an actor thanks to Tim Affleck (father of actor Ben Affleck), who was a stage manager at the Theatre Company of Boston while Woods was a student there.

Woods did 36 plays before making his Broadway debut in 1970 at the Lyceum Theatre, in the first US production of Frank McMahon's Borstal Boy, he got the part by pretending he was British and returned to Broadway the following year to portray David Darst in Daniel Berrigan's The Trial of the Catonsville Nine.

A prominent Hollywood character actor, Woods has appeared in over 130 films and television series as of 2013, beginning with his first television appearance All the Way Home in 1971 and his film debut The Visitors in 1972. He is known for his dark, intense characters. Early examples include his portrayals of a sadistic murderer in 1979's The Onion Field, and of serial killer Carl Panzram in 1994's Killer: A Journal of Murder. He appeared in an episode of The Rockford Files, playing a son whose parents were murdered. He has been twice nominated for an Academy Award: first, for Best Actor, for playing a journalist chronicling events in El Salvador in the early Oliver Stone film Salvador (1986), and again in 1996, for Best Supporting Actor, for his performance as real-life white supremacist Byron De La Beckwith in drama Ghosts of Mississippi. One of his favorite film roles is Max, the domineering gangster, in Sergio Leone's epic Once Upon a Time in America (1984).

During a press interview for Kingdom Hearts II, Woods noted that he is an avid video game player. He is an active dealer of antiques in Rhode Island. Some of his favorite activities are playing golf and cooking.