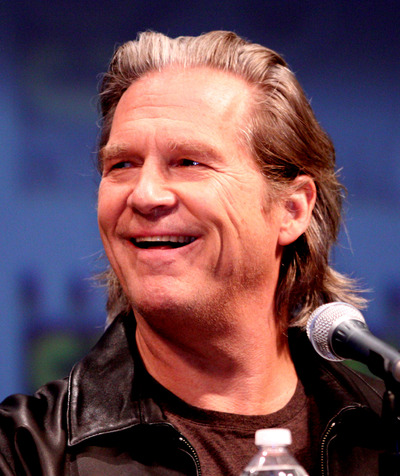 Jeffrey Leon "Jeff" Bridges (born December 4, 1949) is an American actor and producer. He comes from a well-known acting family and began his first televised acting in 1958 as a child with his father, Lloyd Bridges, and brother Beau on television's Sea Hunt. Among his best-known major motion films are: The Last Picture Show, Fearless, Iron Man, The Contender, Starman,The Fabulous Baker Boys, Jagged Edge, Against All Odds, The Fisher King, Thunderbolt and Lightfoot, Seabiscuit, Tron, Arlington Road, and The Big Lebowski. He won the Academy Award for Best Actor for his role as Otis "Bad" Blake in the 2009 film Crazy Heart and earned his sixth Academy Award nomination for his portrayal of Rooster Cogburn in 2010's True Grit.

Jeffrey Leon Bridges was born in Los Angeles, California on December 4, 1949. He is son of showbiz parents, actor Lloyd Bridges (1913–1998), and actress and writer Dorothy Bridges (née Simpson) (1915–2009). His older brother, Beau Bridges, is also an actor. He has a younger sister, Lucinda, and had another brother, Garrett, who died of sudden infant death syndrome in 1948. His paternal grandmother died when Bridges was very young. Growing up, Bridges shared a close relationship with his brother Beau, who acted as a surrogate father when their father was working. Bridges and his siblings were raised in the Holmby Hills section of Los Angeles. He graduated from University High School in 1967. At age seventeen, Jeff toured with his father in a stage production of Anniversary Waltz.

After graduating from high school, Bridges journeyed to New York City where he studied acting at the Herbert Berghof Studio. Also, after turning 18, Bridges joined the United States Coast Guard Reserve, where he served for eight years.

Bridges made his first screen appearance at the age of four months in The Company She Keeps in 1950. In his youth, Bridges and brother Beau made occasional appearances on their father's show Sea Hunt (1958–1961) and the CBS anthology series, The Lloyd Bridges Show (1962–1963). In 1971 he played the lead role Mike in the TV movie In Search of America. His first major role came in the 1971 film The Last Picture Show, for which he garnered a nomination for the Academy Award for Best Supporting Actor. He co-starred in the 1972 critically acclaimed neo-noir boxing film Fat City, directed by legendary director, John Huston. He was nominated again for Best Supporting Actor for his performance opposite Clint Eastwood in the 1974 film Thunderbolt and Lightfoot. In 1976, he starred as the protagonist Jack Prescott in the first remake of King Kong, opposite Jessica Lange. This film was a commercial success, earning $90 million worldwide, more than triple its $23 million budget, and also winning an Academy Award for special effects.

One of his better known roles was in the 1982 science fiction cult classic Tron, in which he played Kevin Flynn, a video game programmer (a role he reprised in late 2010 with the sequel Tron: Legacy). He was nominated for the Academy Award for Best Actor in 1984, for playing the alien in Starman. He was also acclaimed for his roles in the thriller Against All Odds (1984) and the crime drama Jagged Edge (1985). His role in Fearless (1993) is recognized by some critics to be one of his best performances. One critic dubbed it a masterpiece; Pauline Kael wrote that he "may be the most natural and least self-conscious screen actor that has ever lived". In 1998, he starred as what is arguably his most famous role, "The Dude", in the Coen Brothers' cult-classic film The Big Lebowski. He has said that he relates to "The Dude" more than any of his other roles.

Bridges married Susan Geston in 1977. They met on the film shoot of Rancho Deluxe, which was filmed on a ranch where Geston was working as a maid. They have three daughters: Isabelle Annie (born August 6, 1981), Jessica Lily "Jessie" (born June 14, 1983), and Hayley Roselouise (born October 17, 1985). He became a grandfather on March 31, 2011, when Isabelle gave birth to a daughter, Grace. Jeff once stated, "I had a great '70s. Today, being a parent with three daughters, I look back on it thinking, "Oh, man, the things I did!""

Bridges has studied Buddhism. He meditates for half an hour before beginning work on a film set.