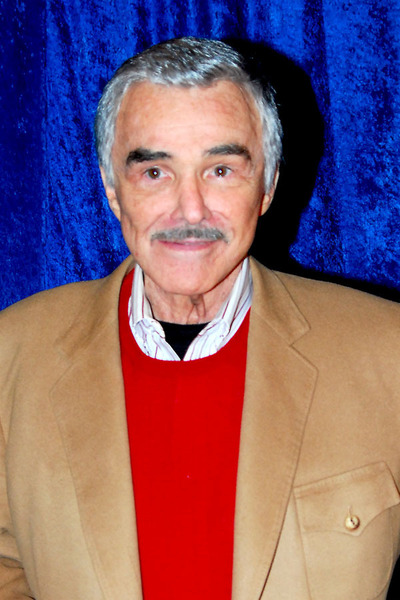 Burton Leon "Burt" Reynolds, Jr. (born February 11, 1936) is an American actor, director and voice artist. Some of his notable roles include Bo 'Bandit' Darville in Smokey and the Bandit, Lewis Medlock in Deliverance, Bobby "Gator" McCluskey in White Lightning and sequel Gator, Charlie B. Barkin in All Dogs Go To Heaven, Coach Nate Scarborough in The Longest Yard and Jack Horner in Boogie Nights.

Reynolds' parents were Burton Milo Reynolds, Sr. (1906–2002), who had Cherokee and Irish ancestry, and his wife, Fern H. Reynolds (née Miller). He was born in the city of Lansing, Michigan. He states in his autobiography that his family was living in Lansing when his father was drafted into the United States Army. Reynolds, his mother, and his sister joined his father at Fort Leonard Wood, where they lived for two years. When Reynolds's father was sent to Europe, the family returned to Lansing. In 1946, the Reynolds moved to Riviera Beach, Florida. His father, Burt Sr., eventually became Chief of Police of Riviera Beach, which is adjacent to West Palm Beach to the north.

In his sophomore year at Palm Beach High School, Reynolds was named First Team All State and All Southern as a fullback, and received multiple scholarship offers. After graduating from Palm Beach in West Palm Beach, Reynolds attended Florida State University on a college football scholarship, and played halfback. While at Florida State, Reynolds became roommates with now notable college football broadcaster and analyst Lee Corso. Reynolds hoped to be named to All-American teams and to have a career in professional football; however, in the first game of the season, Reynolds was injured and a car accident later that year worsened the injury. With his college football career ended, Reynolds considered becoming a police officer, but his father suggested that he finish college and become a parole officer. In order to keep up with his studies, he began taking classes at Palm Beach Junior College (PBJC) in neighboring Lake Worth. In his first term at PBJC Reynolds was in a class taught by Watson B. Duncan III. Duncan pushed Reynolds into trying out for a play he was producing, Outward Bound. He cast Reynolds in the lead, based on his impressions from listening to Reynolds read Shakespeare in class. Reynolds won the 1956 Florida State Drama Award for his performance in Outward Bound. Reynolds calls Duncan his mentor and the most influential person in his life. While at Florida State, Reynolds became a brother of the Phi Delta Theta fraternity.

The Florida State Drama Award included a scholarship to the Hyde Park Playhouse, a summer stock theater, in Hyde Park, New York. Reynolds saw the opportunity as an agreeable alternative to more physically demanding summer jobs, but did not yet see acting as a career. While working at Hyde Park, Reynolds met Joanne Woodward, who helped Reynolds find an agent, and was cast in Tea and Sympathy at the Neighborhood Playhouse in New York City. He received favorable reviews for his performance and went on tour with Tea and Sympathy, driving the bus as well as appearing on stage.

After the tour Reynolds returned to New York and enrolled in acting classes. His classmates included Frank Gifford, Carol Lawrence, Red Buttons and Jan Murray. After a botched improvisation in acting class, Reynolds briefly considered returning to Florida, but he soon got a part in a revival of Mister Roberts, with Charlton Heston as the star. After the play closed, the director, John Forsythe, arranged a movie audition with Joshua Logan for Reynolds. The movie was Sayonara, and Reynolds was told he couldn't be in the movie because he looked too much like Marlon Brando. Logan advised Reynolds to go to Hollywood, but Reynolds did not feel confident enough to do so.

Reynolds began working odd jobs while waiting for acting opportunities. He waited tables, washed dishes, drove a delivery truck and worked as a bouncer at the Roseland Ballroom. It was while working as a dockworker that Reynolds was offered $150 to jump through a glass window on a live television show.

He made his Broadway debut in Look, We've Come Through. Reynolds first starred on television with Darren McGavin in the 1959-1961 NBC series, Riverboat.

On November 11, 1959, Reynolds was cast with Whitney Blake and Howard McNear in the episode "The Good Samaritan" of the syndicated western series, Pony Express, starring Grant Sullivan, which aired in 1960 on the centennial of the primitive mail exchange service. About this time, Reynolds guest starred in the syndicated crime drama, The Brothers Brannagan in the episode "Bordertown". He went on to appear in a number of other shows, including three segments of the Ron Hayes syndicated adventure series, The Everglades. He is remembered too for the role of Quint Asper, the blacksmith/ de facto deputy, and half-Native American on CBS's Gunsmoke from 1962–1965.

At various points in his life, Reynolds was romantically involved with Tammy Wynette, Lucie Arnaz, Adrienne Barbeau, Susan Clark, Sally Field, Lorna Luft, Tawny Little, Pam Seals, Dinah Shore and Chris Evert. His relationship with Shore garnered particular attention given the fact she was 20 years his senior. Reynolds was married to actress/comedienne Judy Carne from 1963 to 1965, and actress Loni Anderson from 1988 to 1993, with whom he adopted a son, Quinton Anderson Reynolds (born August 31, 1988). E! Online reported that he dated Kate Edelman Johnson from 2003 to 2005.