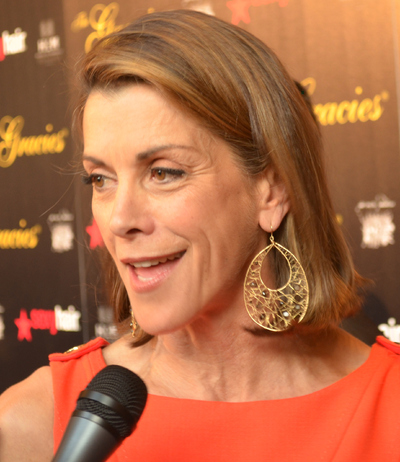 Wendie Malick (born December 13, 1950) is an American actress and former fashion model, known for her roles as Judith Tupper Stone on the HBO series Dream On (1990–1996), Nina Van Horn on the NBC sitcom Just Shoot Me! (1997–2003) and Ronee Lawrence on the NBC sitcom Frasier (2003–2004). Malick plays Victoria Chase on the TV Landsitcom Hot in Cleveland.

Malick was born Wendy Malick in Buffalo, New York, the daughter of Gigi, a former model, and Ken Malick, who worked in sales. She graduated from Williamsville South High School.

In 1972, after graduating from Ohio Wesleyan University in Delaware, Ohio, Malick began fashion modelling for the Wilhelmina modeling agency. She left to work for Republican Congressman Jack Kemp. She soon left Washington, D.C., to pursue a career in stage and screen. She began working as an actress in 1982 in the film A Little Sex.

In 1982, Malick auditioned unsuccessfully for the role of Diane Chambers in the NBC sitcom Cheers She later was cast in ABC medical drama Trauma Center.

Malick played a supporting role in the 1988 film Scrooged as Bill Murray's sister-in-law. Her first lead role on a TV series was on the HBO series Dream On in 1990. She remained on this show until 1996, winning four Cable ACE Awards for best actress in a comedy series. In 1995 she appeared in the sitcom Seinfeld as the character Wendy in "The Kiss Hello".

In 1997, Malick began the role of Nina Van Horn, a shallow, boozing former supermodel on the NBC sitcom Just Shoot Me! – a role she continued until the show ended in 2003. She was nominated for an Emmy Award for Outstanding Supporting Actress for her work on Just Shoot Me! in 1999 and again in 2002.

Malick has been married twice: from 1982 to 1989 to actor and screenwriter Mitch Glazer, and since 1995 to Richard Erickson. Through their charity, A Drop in the Bucket, she and Erickson support a medical center in the Congo and share an ongoing commitment to a women's shelter in Tijuana, Mexico. They live in the Santa Monica Mountains with three dogs, two horses and a cat.