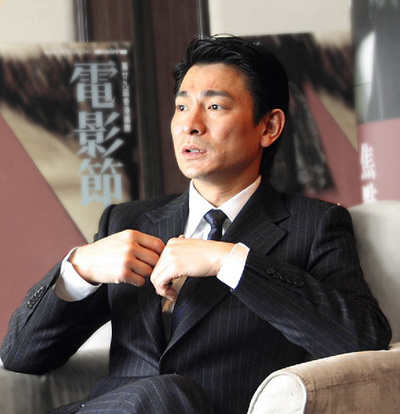 Andy Lau Tak-wah, BBS, MH, JP (born 27 September 1961) is a Hong Kong actor, singer and film producer. He has been one of Hong Kong's most commercially successful film actors since the mid-1980s, performing in more than 160 films while maintaining a successful singing career at the same time. In the 1990s, Lau was branded by the media as one of the Four Heavenly Kings of Cantopop.

Andy Lau was born in Tai Po, Hong Kong. A son of a fireman (劉禮), as a young boy Lau had to fetch water for his family up to eight times a day because their house was not equipped with plumbing. He later graduated from a Band One secondary school, Ho Lap College in San Po Kong, Kowloon. He was named as Lau Fook-Wing (劉福榮) during his academic years. He also practices Chinese calligraphy. Lau converted to Buddhism in the 1980s. He was raised in a nominally Buddhist household and is now a follower of the Lingyan Mountain Temple in Taiwan.

n 2008, Lau married Malaysian Chinese Carol Chu after 24 years of speculation over their relationship. The couple were married in Las Vegas. On 9 May 2012, Chu gave birth to his first child, a daughter named Hanna.

In 1981, Lau signed up for the artist training program offered by TVB, which is where his acting career began. The lead role which led to his initial popularity was in the 1982 TVB series The Emissary. In 1983, Lau's role as "Yang Guo" in the TVB wuxia series The Return of the Condor Heroes further increased his popularity. From then on, he would take on many of the lead roles in many of the TVB series.

In September 1983, TVB was looking to increase their ratings in competition with Korea and Japan for the best variety show. The station then created the show TVB All-star challenge (星光熠熠勁爭輝) featuring almost the entire line-up of the most popular actors and singers at the time. Lau along with Tony Leung, Michael Miu, Felix Wong, and Kent Tong were branded as "TVB's Five Tigers" (無線五虎將) due to their popularity on the show.

In the late 80s, Lau left TVB due to contract problems. TVB wanted to bind him to an exclusive five-year contract which Lau refused to sign, so TVB blacklisted him. He then focused on his film career.

In 1981, Lau made a guest appearance in one of Susanna Kwan's music video and caught the eye of the manager Teddy Robin. Teddy Robin then gave Lau a chance to play a small role in the movie Once Upon a Rainbow. This was the first step in Lau's film acting career. He was then given a role in Ann Hui's 1982 film, Boat People. Later in 1983 he had his first leading role in a Shaw Brothers film called On the Wrong Track.

One of his early leading roles included the more serious 1988 film The Truth (法內情). However, Lau is best known in movies for his (often) recurring roles as a "Heroic Gangster" such as Wong Kar-wai's 1988 film As Tears Go By and Benny Chan's 1990 film A Moment of Romance.

Though a respectable actor, Lau in the early days was known more for his good looks. The people he works with say he is an idol, but he has claimed to be an artist. Lau has proved his acting skills in many of his movies. His first major acting prize came with A Fighter's Blues, which was his first Golden Bauhinia Award for Best Actor. He would win the Hong Kong Film Award for Best Actor award that year for Running out of Time. In 2004, he won the prestigious Golden Horse Award for his performance in Infernal Affairs III, the sequel to the popular Infernal Affairs. He is also known to Western audiences for starring in wuxia films such as House of Flying Daggers, which was nominated for an Academy Award for Best Cinematography.

Lau released his first album "Only Know that I Still Love You" (只知道此刻愛你) under Capital Artists in 1985. However, his first album was not a big hit. Despite having a voice not traditionally associated with popular music, his hard work and perseverance resulted in him being one of the most successful singers in Cantopop. His singing career reached stellar status in 1990 with the release of the album entitled "Would It Be Possible" (可不可以), and his subsequent releases only solidified his status as a marketable singer. For that song, he would win his first 1990 RTHK Top 10 Gold Songs Awards. He would then win at least one RTHK award category every year consecutively until the year 2007.

Many of his songs quickly topped the music charts, not only in Hong Kong, but also in Taiwan, Mainland China, and in many different parts of Asia. Some of the most notable hits by Lau include "The Days We Spent Together" (一起走過的日子), "If You Are My Legend" (如果你是我的傳說), "The Tide" (潮水), "Forget Love Potion" (忘情水), "True Forever" (真永遠), "Chinese people" (中國人), "Love You Forever" (愛你一萬年), "You Are My Woman" (你是我的女人), "Secret Admiration" (暗裡著迷). Besides singing in Cantonese and Mandarin, he also sang in other languages, such as English, Japanese, Malay, and Taiwanese. One example of a Hokkien song was (世界第一等), and also was known for covering Joan Jett's "I Hate Myself for Loving You" (我恨我痴心) in a local language.

Since the early 1990s, Lau, along with Jacky Cheung, Aaron Kwok and Leon Lai have been referred by the Chinese media as the Cantopop Four Heavenly Kings.