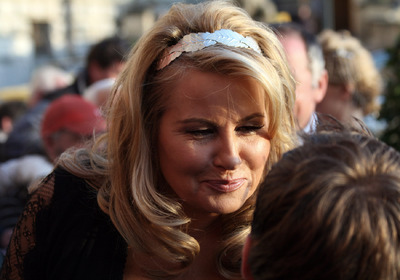 Jennifer Coolidge (born August 28, 1961) is an American actress and comedian, known for playing "Stifler's mom", the MILF in the film American Pie (1999); Hilary Duff's stepmother in A Cinderella Story (2004); Paulette, the manicurist in Legally Blonde (2001) and its sequel; the voice of Aunt Fanny in the animated feature Robots (2005); for her role in The Secret Life of the American Teenager as Betty; and for her regular role in the NBC sitcom Joey as Joey's agent, Bobbie Morganstern. She is also a regular actor in Christopher Guest's mockumentary films. Coolidge is an alumna of The Groundlings, an improv and sketch comedy troupe based in Los Angeles. She stars in the CBS sitcom 2 Broke Girls as Sophie, Max and Caroline's Polish upstairs neighbor who owns a cleaning business.

Coolidge was born in Boston, Massachusetts, the daughter of Gretchen (née Knauff) and Paul Constant Coolidge, a plastics manufacturer. She was raised in Norwell, Massachusetts, and has a brother, Andrew, and two sisters, Elizabeth and Susannah. Coolidge attended Norwell High School, the Cambridge School of Weston, Emerson College in Boston and the American Academy of Dramatic Arts in New York City. Her charitable work has included a history of supporting AIDS assistance and animal rights.

Coolidge is known for her supporting roles in many comedy movies and guest spots on television. Having made one of her first appearances in the Seinfeld episode "The Masseuse", as well as appearing in a recurring role on King of the Hill as Luanne's beauty school teacher, Miss Kremzer, Coolidge is best known for playing "Stifler's mom," the consummate "MILF," in the American Pie films, though she is also known for supporting parts in other films, including Hilary Duff's stepmother in A Cinderella Story; Paulette, the manicurist in Legally Blonde and its sequel; "Hottie Police Officer" in A Night at the Roxbury; and the voice of Aunt Fanny in the animated feature Robots.